Some of your favorite products have absurd medicinal histories

When men were men and sodas were cocaine-laced nerve tonics. 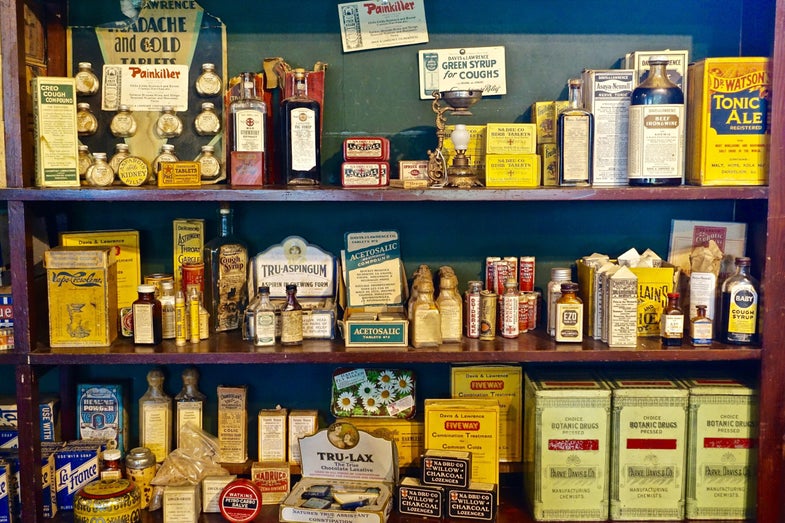 Before they were staples in your fridge or household supply cabinet, many ordinary products were used in extraordinary (and often totally absurd) medical contexts.

The most popular example is Coca-Cola, which was first brewed on March 29, 1886 by Georgia-based pharmacist John Stith Pemberton. The sugary soda was originally marketed as a “nerve tonic.” Ads from the 19th century promote the drink, which contained a few milligrams of cocaine per glass, as a way to increase intelligence, relieve exhaustion, and cope with emotions like hysteria and melancholy. Pemberton himself became interested in brewing the drink as a way to manage his morphine addiction, from which many Civil War veterans suffered.

But Coca-Cola is hardly the only soda, let alone the only popular American product, to have such a strange backstory. Here are six other mini-medical histories—and one dispatch from the future.

Every other soda was “nerve tonic,” too

Coca-Cola may be the most prominent pseudo-medicinal soda, but it’s actually in great company. The soft drink 7-Up was once marketed as a mood stabilizer. Originally called Bib-Label Lithiated Lemon-Lime Soda, until 1950 the drink contained lithium citrate, a chemical compound used to manage bipolar disorder. Other carbonated beverages were promoted similarly, which explains a lot about why soda fountains were installed inside local pharmacies.

Lysol is an incredibly acidic cleaning product. Even if you’re using it properly—on hard surfaces like kitchen countertops or toilet seat lids—it’s probably still reddened your hand or irritated your skin on occasion. So imagine using it… on your genitals.

And yet, that’s exactly what many women did before the U.S. legalized birth control for all in 1972. In 2013, historian Andrea Tone argued that “feminine hygiene,” a widely touted benefit of the cleaning supply, was a euphemism for birth control. That’s right: Lysol was, for many years, branded its product as a way to kill sperm. And it probably worked! Unfortunately, the solution was just as caustic on your lady parts. Mother Jones reports that by 1911, doctors had recorded at least five fatalities due to “uterine irrigation.”

Graham Crackers were a purity snack

Known as a “dietary reformer,” Sylvester Graham eschewed many of the world’s greatest treats. He abhorred alcohol and became one of the early proponents of a vegetarian diet in the United States. But his beliefs, which became known as “Grahamism,” reached their zenith in his promotion of unsifted wheat flour.

Fig Newtons were a digestive aid

Fig Newtons were originally promoted as a digestive aid. In 1891, when the little cookies made their debut, it was thought that a daily snack of fruit and biscuits was what really kept the doctor away. Even today, Fig Newtons are promoted as a healthier snack option—”with real fruit!” the boxes say—but for what it’s worth, each cookie has only one gram of fiber, which is a half gram less than you’ll get from a single, unprocessed fig.

Today, the brand Kotex is synonymous with menstrual pads. But back in 1914, this material staunched a different kind of bleeding. Cellucotton, as the processed wood was once known, is five times as absorbent as cotton at half the cost. This made it at a favorite among army doctors during World War I.

With peace restored, the Kimberly-Clark paper company needed to find a way to keep the Cellucotton train running. They decided to pivot from bandages to sanitary napkins. Given most women were simply relying on cloth rags until that point, Kotex, as the product would come to be known, was a hit with the ladies—and remains so today.

Malaria is a pretty terrible disease. Caused by a small parasite delivered by an infected mosquito, it causes fever, chills, and sometimes death. As the British empire sent its emissaries out to conquer the world, the potential perils of malaria were naturally top of mind. Fortunately, by the turn of the 19th century, people had figured out that quinine protected against the infection.

But there was one problem: Quinine, which is derived from cinchona bark, tastes really gross. So the Brits started mixing it with soda and sugar, which is how we got tonic water. Eventually, the colonists got even more clever about their spoonful of sugar, mixing the sweetened medicine with gin and a little lime. And that’s how homemade medicine gave us Jay Gatsby’s favorite drink: the gin and tonic.

Multivitamins were “good for your health”

Oh wait! This isn’t historic at all.

It’s 2018 and the vitamin industry is currently valued around $37 billion. People take vitamins to grow shinier hair, boost weight loss, and make it through cold and flu season unscatched. Unfortunately, multivitamins are about as legitimate as Coca-Cola’s nerve tonic.

For one, there is almost no government oversight regulating the promises vitamin and herbal supplement sellers make. While we know the health benefits of many vitamins in the context of a varied diet, when taken in pill form, you often just pee the vitamins out. (Just ask the Australian Medical Association, which has gone so far as to call multivitamins “very expensive urine.” Even more alarming is the fact that an excess of some supplements can be bad for you, as evidenced by recent research that suggests mainlining vitamin B can increase your risk of lung cancer.

While “patent medicine,” like the kind Pemberton practiced when he promoted dubious health-boosting claims about Coca-Cola, is an antiquated term, modern folks still love to believe the things they buy make them healthier than their friends are—and they love talking about it, too.

Maybe, in an enlightened future, we’ll find a way to repurpose our vitamins the way we’ve changed our relationship to 7Up or Kotex. Perhaps we’ll wear multivitamins like pendants on a necklace. Or we’ll dole them out to our children as an alternative to sugary candy or toys and trinkets. Maybe if I take enough multivitamins (washed down with a swig of Coke, perhaps?) I’ll live long enough to see the shift happen myself.