Almost everything you know about cheese is wrong

Shredded cheese doesn’t melt as well and other fascinating facts about fromage. 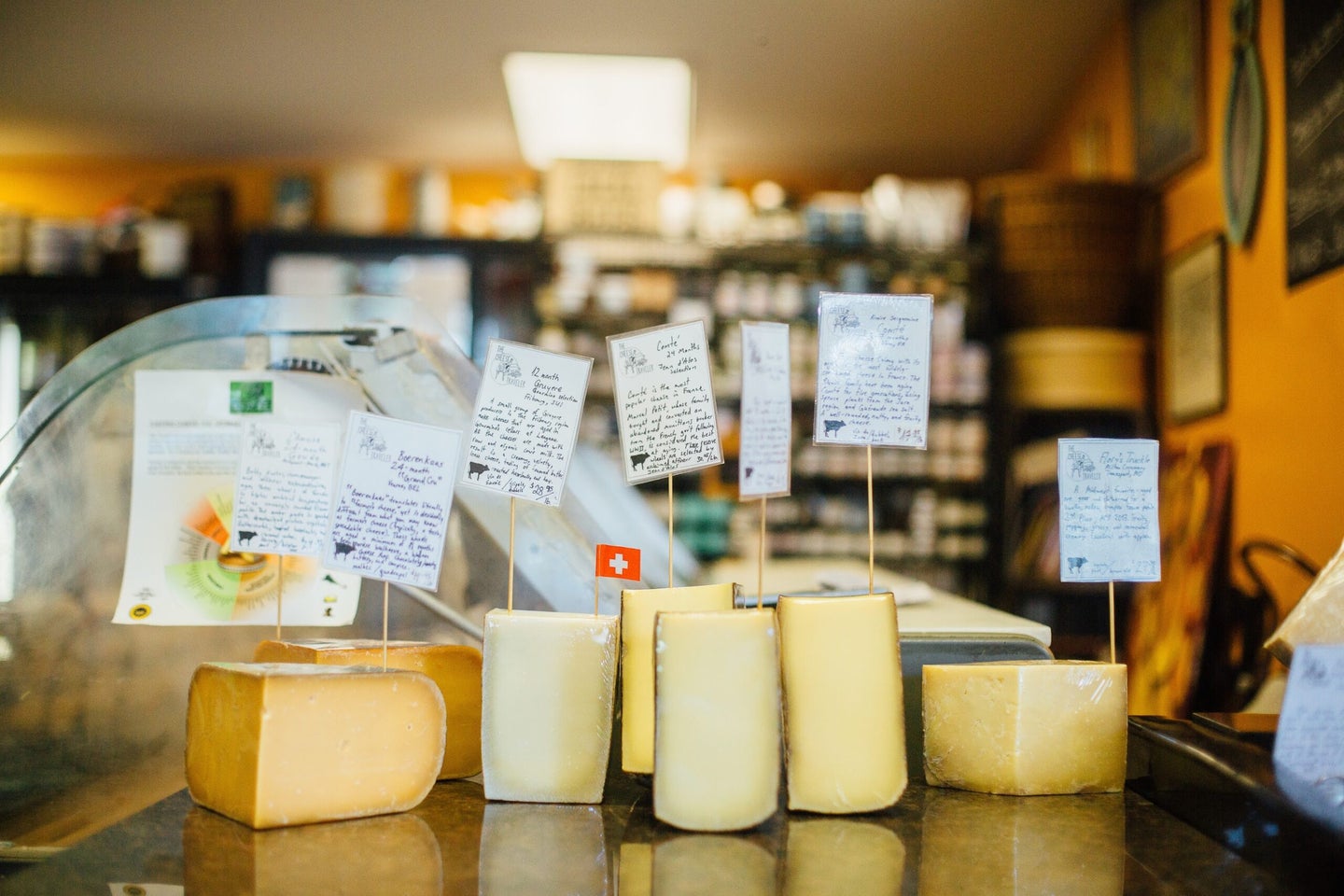 A cheese shop will give you tons of options you may not find in the grocery store. Stan Horaczek
SHARE

A bag of pre-shredded cheese from the supermarket can really come in handy if you’re in a hurry and looking for a quick fix of salt and fat. Unfortunately, many pre-shredded cheeses also come with a dose of cellulose, which is essentially wood pulp. It sounds scarier than it is: cellulose is a common food additive that keeps cheeses like shredded mozzarella and grated parmesan from solidifying back into a clump while in transit and sitting on the store shelves. It serves a real purpose, but it also hinders it from melting perfectly.

The solution then is to grate the cheese fresh off the block or skip the grating process completely, says Mary Rizzo, owner of The Cheese Traveler shop in Albany, New York. If you’re making a pizza, one of the most common uses for shredded cheese, she suggests you leave the ingredients as pure as possible. “The style of cheese making that is traditionally on a pizza is called pasta filata. Those curds are stretchy and you can make them into long pieces.” She suggests pulling the mozzarella balls apart into smaller chunks by hand and cooking at a high temperature between 500 and 600 degrees F so that the moisture doesn’t pool and make your pie soggy.

Obviously, pre-shredded mozzarella still does just fine on plenty of pizzas—but there’s a big world of cheese out there, and it’s easy to make mistakes trying to navigate it. Here are some other common fixes (or upgrades) you can make to your cheese game, whether you’re trying to become an Instagram chef or just take a break from your daily Baby Bell.

Processed cheeses like the singles that come pre-packaged from the store don’t have all that much in common with the food we traditionally call “cheese.” According to the FDA, pasteurized process cheese food must contain more than 51 percent cheese, while pasteurized process cheese product holds 50 percent or below. Many pre-wrapped singles fall into that latter category. That’s not to say they don’t have their place—cheese food or product still really hits the spot on a burger. But moving on to the world of full-fledged cheese doesn’t have to be that hairy.

Rizzo suggests Colby cheese as a gateway into more sophisticated cheeses. “It’s practically sisters with cheddar and gouda,” she explains in regards to its manufacturing. “After a certain point in the process, you drain all the liquid from the curds. That’s where the recipes really begin to differentiate themselves. If you give those curds a second rinse, you’re starting to sweeten them. You’re washing away more of the acidity. Cheddar gets one rinse, but rinsing it multiple times brings you into the creamier, milder cheeses.”

It seems logical that an airtight container would help keep cheese fresh like it does for most other things, but it actually suffocates the microbiome in the food. “Cheese is a living, breathing thing. When you buy cheese that’s been cryovaced, it has been cut off from oxygen and that changes the taste,” Rizzo says. “A lot of people find blue cheese to be really acidic and minerally; that’s because it hasn’t been able to breathe at the grocery store.” Wax paper does a good job of keeping the cheese relatively protected from the elements in the fridge or on the counter while still letting some oxygen make its way in.

Cheddar cheese on the block is a slight outlier in that its tanginess is part of its appeal, so buying and storing it in airtight packaging will maintain the bite.

Learn why certain cheeses are crunchy

Bite into an aged cheese and you might find yourself chomping down on a small crystal that you’ll probably mistake for salt. In reality, it’s a protein called tyrosine that’s formed during the cheesemaking process. “The protein collects as the moisture is drawn out of the cheese into little deposits,” says Rizzo. “Those crunchy little nuggets exist when cheeses get aged over a year.” They can be surprising when you first encounter them, but they’re innocuous and even appealing once you get over the initial crunch.

American cheesemaking has seen a boom in the past two decades or so. The French and Italian continue to make top-notch recipes, of course,, but you may have a local cheesemaker that can help you widen your palate and shop more sustainably. Rizzo currently recommends a cheese called Invierno (Spanish for “winter”) created by Vermont Shepherd. “It’s a sheep’s milk cheese finished with a little cow cream,” she notes.

At her cheese shop, Rizzo rates cheese tastings from “mild to wild,” which means the milder, younger cheeses come before the cheeses with more “depth of flavor.” Once you know where your preferences fall on that scale, you can move on to choosing the right food to help bring out the qualities of the cheese that you enjoy most. Good companions include everything from fruit to mustard. If you’re buying cheese at a counter, ask a professional for suggestions on pairings. You can also check out this Saveur guide on building a perfect cheese plate.