Unblinking robotic eyes are the best for capturing human emotion 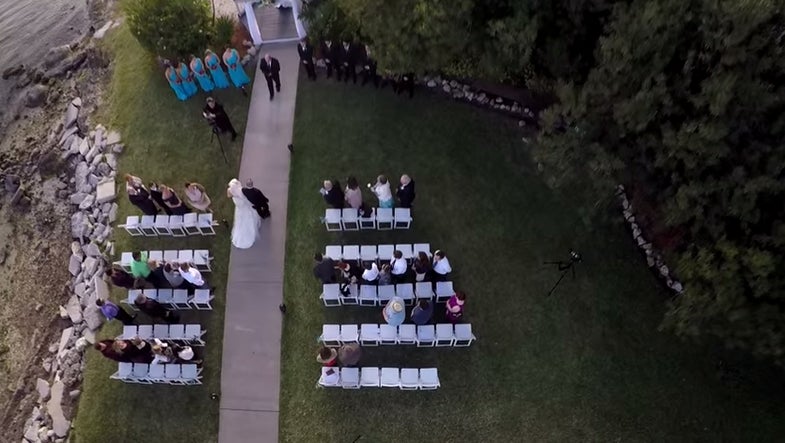 From the House of Representatives to live-streamed weddings in Sonoma, having a drone film a couple’s first moments as newlyweds is all the rage. A search for “drone wedding” on YouTube turns up about 100,000 hits, so this trend is clearly well under way. Here are some of the best drone wedding videos we’ve found.

Fairytale Filmed, If The Fairytale Had Robots

At this wedding in Oregon, the drone captured the dances, then drifted lazily over the reception, capturing a Ducks mascot and several groomsmen well into their cups. High-altitude crowd shots and close-in dance video captured the full spectacle and intimacy of the affair. Well done, drone crew. And congrats to Molly and Ryan, the couple at the center of this drone video (and the wedding too, I suppose).

How Not To Use A Drone At A Wedding

Attempting to get a nice, framed shot of the married couple, this drone hovers at head level. Dangerous. Then it zooms in, missing the couple as it gains altitude. Perhaps overcome by jealousy, at about 1:24, the drone suddenly lurches forward, smacking the kissing couple right in their faces before crashing upside down. Don’t do this. (If you’d like to see the video as the couple intended, it’s here.

Before Leeanne and Andrew Randolph’s marriage at the Rusty Pelican in Tampa, Florida, the drone scouted out the venue, inspected the groomsmen, and then patiently waits until after the ceremony to start flying again. The drone does a great job capturing the outdoor scenery and the coastal setting, and just describing the video makes me feel like a bridal catalogue, so, moving on.

Do Drones Get Cold Feet?

If you’re going to fly a drone at a wedding, it’s helpful to have some experience beforehand. In this video, after scouting out the location, the drone nearly falls into a river and instead hits a tree before tumbling down to lie flat on its back. Fortunately, only the robot’s day was ruined.

Sometimes a simple gesture works just as well. At Gemma and Martin’s wedding, Martin himself flew a remote control helicopter down the aisle with the rings slung underneath. Watch it below: