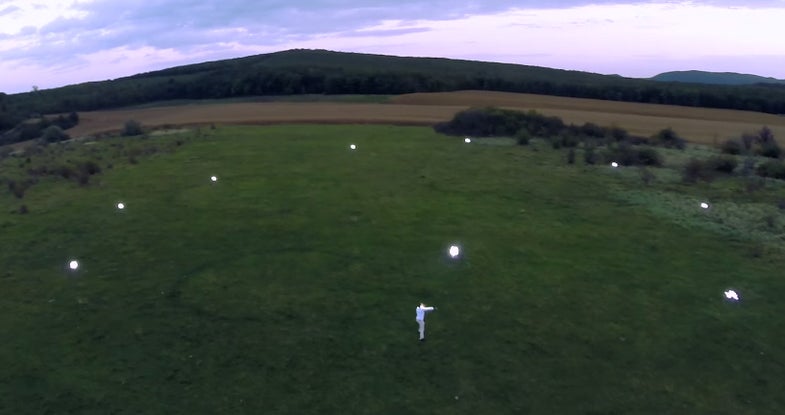 It looks like magic, from a distance: flying lights traveling in a circle around a single illuminated human. In ages past it would seem to be full of spirits, but to a modern eye it seems just as likely a weird form of alien attack. The spectacle is instead both profoundly human and quintessentially modern: it’s a human, playing with a swarm of light-up robots. Together with a team of researchers and artists called COLLMOT, Tamás Vicsek, a professor of Biological Physics at Eötvös Loránd University in Budapest, created “Dancing With Drones,” an art spectacle where a swarm of 10 autonomous drones orbit around a human dancer. The whole process is united by choreographer Nina Kov.

Here’s the latest teaser from the project:

The dance is delightful. And while this is currently the only video up at Dancing With Drones, the site suggests a much larger show in the works:

An earlier video, released by Kov last May, shows the humans working to make the dancer and drones work harmoniously together for the show.

Like a flock of slow-moving but curious hummingbirds, the drones follow and react to the human dancer in their midst. On Kov’s hand is a device that communicates with the robots. The robots read commands from the handheld device, and then follow it, communicating with each other about how best to do so while following rules that maintain both formation and safe distance. When the dancer sits, the drones hover in place, a sort of flying slump. A lifted arm sends the drones skyward, and a forward thrust with a hand urges the swarm on like puppies chasing a thrown stick.

Future performances could feature more human dancers. No word yet on whether multiple swarms of drones could work together in a performance, but I’m holding out hope for a robo-filled West Side Story remake where the Jets are actual jets.