One tiny scout for now, one big question for the future 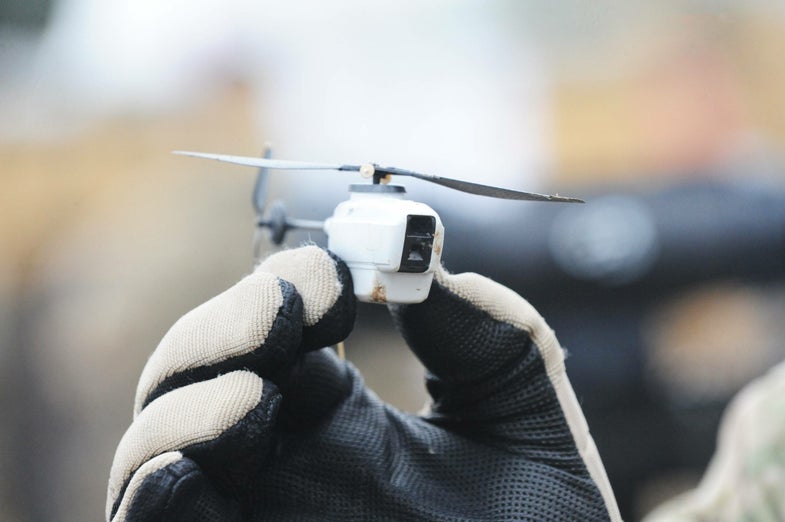 The Black Hornet is exactly the kind of drone that scares people about drones. It’s small, fitting easily into the palm of a hand or a pouch pocket. It’s name evokes Black Hawk, an iconic military helicopter that features prominently in conspiracy theories. And it’s entirely a military device, in the works for years and used by the British military since at least 2013. Now, American Special Forces are getting their hands on the tiny flyer.

Despite its ominous name and alien-helicopter appearance, the Black Hornet is a fundamentally simple drone: it’s a camera that flies, useful for the military as a sneaky scout. The pilot uses a one-handed controller and watches video from a chest-mounted screen. The data sent back by the hornet is stored in a container on the pilot, so if enemies catch the Black Hornet (which can be done with, like, a butterfly net), they don’t know what it saw. It films in normal light and infrared, has a range of about two-thirds of a mile, and lasts as long as 25 minutes in the air.

The Black Hornet is certainly a capable scout, and it’s likely that, should the American Special Forces choose to bring it into the field, they’ll get some advantage out of it. But the Black Hornet is as much a modern tool as it is a template for speculation about the future, a harbinger of small drones to come. As Popular Science contributing editor Erik Sofge noted earlier today, deadly swarms of small autonomous drones are among the potential horrors that might await us in the future. He writes: “[Lethal autonomous weapons systems] would be closer to a plague of guided munitions than an automated fighting force, leaving a locust-like trail of inert, disposable components alongside their victims.”

We are, thankfully, not yet at that stage in drone development, and while it’s a possible future, it’s by no means a guaranteed one.

In the meantime, watch this tiny scout drone fly around: