Begun, the drone wars have 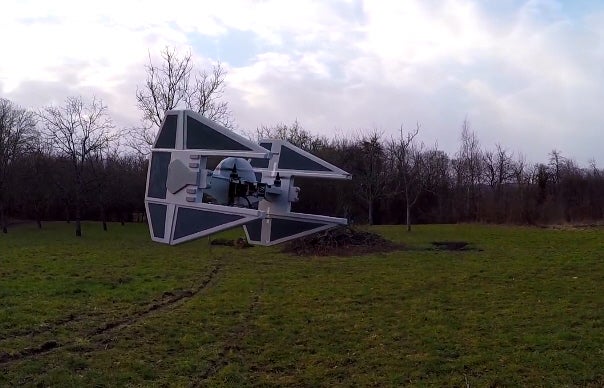 Last time we saw the handiwork of hobbyist YouTuber Olivier C, he was smuggling for the Rebel Alliance with a custom-built Millennium Falcon body for his drone. Now, it appears Olivier has turned over to the Dark Side, as he’s built a custom-made TIE Interceptor body for a drone.

The Millennium Falcon has a relatively flat body, so making a quadcopter conversion is fairly intuitive. The TIE Interceptor, by contrast, has a ball-shaped cockpit on a central rod with perpendicular curved-in wings on either side. It’s an iconic design and great for space (according to Wookipedia), but not the most aerodynamic way to fly in Earth’s atmosphere.

How does Olivier adapt the TIE to normal skies? By resting a TIE-fighter-shaped foam body on top of a quadcopter. This detail is visible in the design notes and preview trailer. The interceptor also has a blow light in the back to represent the glowing twin ion engines, and a bright light in front that “fires” in bursts like laser blasts. Thanks to the needs of the weirder body, the TIE interceptor drone ends up being larger than the Millennium Falcon quadcopter, which goes against canon, but we’ll overlook that detail because it’s so awesome.

Watch it fight for the Dark Side in the dark skies below:

And during the day: