You Can Crowdfund A Scout Drone For Ukraine’s Army 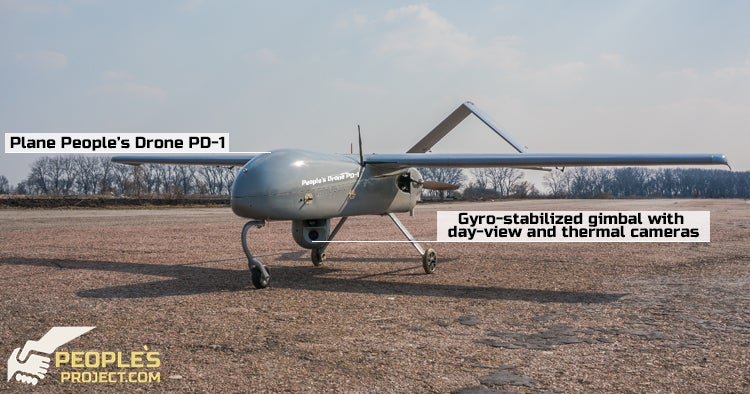 The war in Eastern Ukraine features crowdfunded robots. Labeled the “People’s Project,” a website is collecting donations for people to buy Ukraine’s government weapons for war. In March, they were raising money for a remotely controlled tank and gun turret, which is now 84 percent funded. Now, they’re raising money for a 50-pound drone.

Dubbed “The People’s Drone,” the craft they are raising money for looks a lot like an RQ-7 Shadow. With a cruising speed of 55 mph, a top speed of 80 mph, and flight endurance of up to 5 hours, the People’s Drone is worse in all categories than the real Shadow except for cost. Each Shadow runs the U.S. government about $750,000; the People’s Project hopes to fund its drone for just $35,000.

With onboard cameras that can transmit encrypted video up to 25 miles away, the People’s Drone is a scout, like the Shadow–not an assassin. If it’s used the same way, and military camera drones tend to be, it will look for enemies hidden over hills or behind buildings. The United States tends to operate its pricier drones in environments where there’s not a ton of risk of getting shot down, but the People’s Drone’s low cost is designed to account for lost planes.

The American Air Force is also looking into low-cost drones it can lose after a few missions. As much as the current fighting in Ukraine hearkens back to the Cold War, cheap drones built from crowdfunding campaigns are very much an indication of the future of war, not the past.

Here’s video the People’s Drone recorded in a flight: