Watch A Drone Get Soaked By A Firefighter

Maybe next time ask permission before flying over a fire 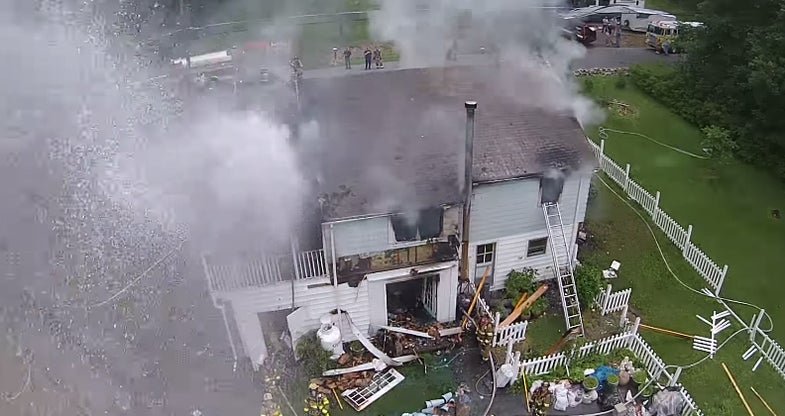 Rescue robots can be a great aid to firefighters, but they should probably be invited first. An almost 14 minute long video uploaded to YouTube by John Thompson shows the footage from his drone flying over a fire call. Twelve minutes in, a firefighter turns his hose to the interloping quadcopter, hitting its camera and forcing the pilot to fly higher out of range.

Watch the interaction below, and cut to 12:00 for the hit:

In the past, drones have aided firefighters. In February of 2014, a Connecticut volunteer firefighter brought a drone to a blaze at a quarry, and it helped prevent an explosive disaster. Last month, a volunteer piloted a drone in Texas to help save people from flooding. When coordinated with rescue workers on the ground, drones can be very helpful, but it’s best to make sure that the drone is wanted.

In March, a news helicopter in the Seattle area was filming a fire at a salvage yard when the pilots spotted a drone watching the fire too. The drone pilot undoubtedly wanted the same thing as the helicopter crew: great aerial shots of the fire as it happened. Unfortunately, the quadcopter got close to the news helicopter, which led to a weird chase as the news crew tracked down the drone pilot. The problem is one that has been vexing the FAA as more and more drones come online: how to integrate both drones and manned aircraft safely into the same sky. The FAA’s immediate response hasn’t been great–cracking down on journalists using drones, or requiring them to get pilots’ licenses.

Either way, if it’s just a hobbyist flying a quadcopter near an emergency response team, unless they’re there as media or actively working with the fire crew, it’s probably best to keep a reasonable distance. John Thompson, whose drone the firefighters blasted with water, is now planning to bill the fire department for the damage done to his drone.