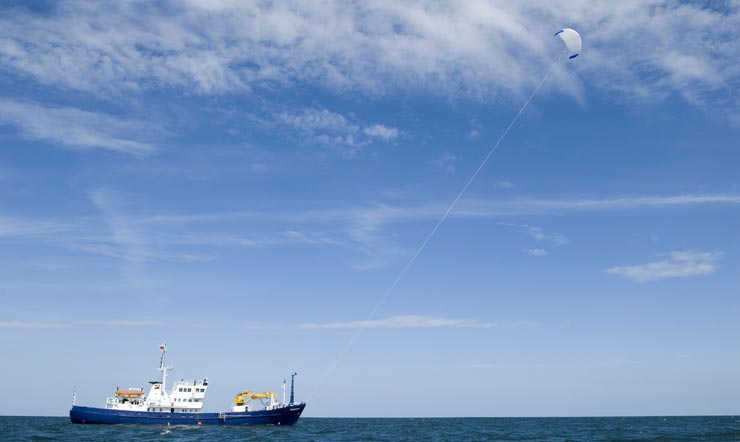 With oil prices recently breaking the psychologically important barrier of $100 per barrel, commuters aren’t the only ones feeling the heat. Cargo vessels are responsible for moving 98% of all intercontinental goods, and a transatlantic crossing on fully-loaded 200-meter ship is not light on the diesel consumption. So far, at least two companies promise to deliver a technology not seen on massive ocean-going ships in quite some time: the sail.

We’ve written about one of those companies, SkySails, previously, and it recently completed its maiden transatlantic voyage to test the new system. The sail device looks like a puffy hang glider, about the size of a football field. It’s attached to the bow of a container ship by a high-strength carbon fiber rope and flies upwards of 100-300 meters into the sky. What makes it different from a traditional sail catching the wind is that the SkySail acts as a giant wing creating lift and translating that to a pulling force on the ship. The sail is controlled by a pod attached between the sail and the connecting rope, which automatically adjusts the angle and position of the sail to provide the most power to the ship. It can even operate at up to a fifty degree angle against the wind.

The company claims the sail is three times as efficient as fixed sails and that that efficiency only increases as the sail flies higher, taking advantage of winds not apparent at sea level. It promises to reduce annual fuel costs by 10-35%, which is great news for shipping companies; not to mention for the rest of us–burnt shipping fuel is estimated to account for 4% of global carbon dioxide emissions.