Her thoughts on proton packs, soldering, and her 'science geek/punk rock bizarro' character In a cast as star-studded as that of the new Ghostbusters, it might be hard to stand out amongst the comedy heavyweights. Kristen Wiig, Leslie Jones, Melissa McCarthy, and even Chris Hemsworth are hilarious, but the summer blockbuster’s breakout star may be Kate McKinnon, the Saturday Night Live veteran who plays Jillian Holtzmann, a nuclear engineer.

McKinnon is also the only cast member whose passion for quantum mechanics and soldering equals her comedy talents. Popular Science spoke with McKinnon about bosons and how the film rekindled her DIY interests.

Did you do any prep for this role, as far as speaking with physicists or researchers?

Well, let’s see. I read, I boned up on my astrophysics books. I read something by Brian Greene. And the sets of the laboratories had been designed by a physicist from MIT, who gave us a lot of useful information. And I did a lot of Wikipedia-ing of nouns that I had not seen in a long time.

Did you fall into any Wikipedia dark holes while doing this research?

I actually did, but I forget what it was about. God, I forget.

I interviewed both MIT physicists who worked on the film, and they were excited to geek out on it. Was it interesting to work on a set that had this much scientific thought put into it?

Yeah, it was great. Just the notion of playing a scientist was why I wanted to do the movie in the first place. I think I probably geeked out with one of the scientists. I have been a big astrophysics and quantum mechanics fan for a long time, and this dealt very much with the possibility of quantum mechanics.

You mentioned to Entertainment Weekly that as a kid, you were obsessed with circuit boards. Do you remember anything you built from that time?

I know that I built a phone. It was out of a kit. I built a phone from a kit. A friend of mine was really taking apart computers and rebuilding them, but I never got to that, because I had a lot of other artistic interests as well, and science fell by the wayside. But I did do a bunch of electronic kits. And in fact, over the summer, I was so inspired by all the soldering that I was doing on site that I did buy a small soldering kit and made an alarm. Over the weekend. I just wanted to remember how to solder.

Did you actually make an alarm?

I did, but it required a 9-volt battery, and I just never got around to buying the battery, so I actually don’t know if it works.

The proton packs, you had mentioned, were near and dear to everyone on the set. Did you get to test any of the original ones?

I did not, but I heard from the horse’s mouth, Bill Murray, that those were heavier. And I have a hard time believing that, but I will take him at his word. Ours were very heavy as well.

Did you get to keep yours after you were done filming?

That is such a bummer.

They are very sophisticated machines, and I wouldn’t want to have one lying around the house. 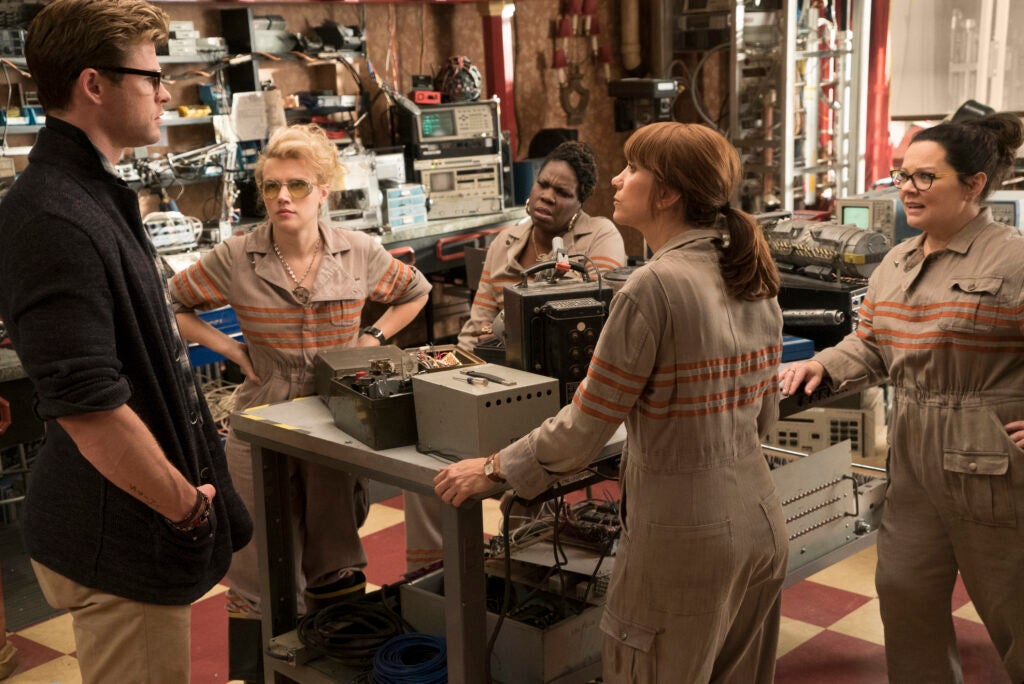 A production still from the new ‘Ghosbusters’

I spoke with Kirk Corwin, the film’s property master, and he told me all the stuff that went into building the packs. Did you get to geek out with him, in terms of all the doo-dads and the soldering that went into it?

No, but there was a lot of ‘can you make these lighter?’. That was the extent of our interaction with him. I should have. It’s the most amazing intersection of tech and art; those props were so unbelievable looking.

Kirk was telling me the wands were able to holster themselves, which I assume was fun to play around with.

Fun, but difficult to get the angle right, but when you did, you felt like a real badass.

You did a lot of research, and you have a science background. Were there any scenes you could improvise?

The improvising was what I really wanted to bone up on. It was tough to make up jargon, because of course we haven’t proven ghosts yet, so I spent a lot of time trying to wrap my head around what the real nugget was, what the scientific principles undergirding these ghosts were. I was able to improvise a little around that. I threw in some particle physics words, and it sounded like it made sense.

Any scene in particular?

I am not sure what ended up in the final cut in the movie, but I did always try to come up with one science-y thing to say while we were filming for each thing.

Are the scientific principles easy for a layperson to understand while watching the film?

There is a portal, and it makes sense when you watch the movie. It sounds legit. And I think they consulted physicists in writing the script as well. On some level, it makes sense. You can kind of wrap your head around it.

There are so many movies, like Ghostbusters, that are based on real science. When you are working with this, does that help you as an actor to have some level of logistical certainty?

Oh absolutely. I think that any sort of fantasy or sci fi that is grounded in something that could ostensibly be real — Jurassic Park being my favorite example — is that much more prescient because it means that much more. Maybe one day, what if? For Ghostbusters, the thing that makes it such an amazing franchise and an amazing idea is that it is adds the element of physics and technology. It’s not just about ghosts. Who the heck came up with that? It is such a good idea, such a unique combination of stuff from different genres. Ghosts and sci fi.

Was your character based off any actual scientists?

Hm. No, I didn’t base it off any actual scientists, but I wanted her to be very much a combination of science geek and punk rock bizarro. And I think that rings true, because most scientists are that in real life to some degree. I wanted to tap into that reality.

And there is that meme going around on Holtzmann having a similar hairdo to Egon the cartoon version.

I shit you not when I say I didn’t know about that. I knew there was a cartoon version, but I guess I hadn’t seen it in so long that I had truly forgotten that that is what Egon’s hair looked like. And then I pitched this hairdo as a “inspired by Tilda Swinton” look and it just happened to align with the cartoon.

And the glasses are unique. Is there anything scientific about them, or they just look hip and artistic?

After the film is over, do you think you’ll continue to tap into the DIY aesthetic of your childhood?

We have pushed into different territory since then. I have been refinishing furniture, and that is a different sort of DIY, but I know I will solder again.

No, I always return to it every few years and see what new bosons have been found. it is always exciting to catch up on.

Earlier this year, everyone freaked out about gravitational waves. Do you have one concept or idea you go back to and read again?

There was a PBS special about general relativity, and one about special relativity, but I just remember when I saw it — the visual of spacetime bending on a heavy object — for first time. I was 14 or something, and I just thought ‘how am I even alive? This is so insane.’

And whenever I go back and read [Stephen Hawking’s] A Brief History of Time, that continues to astound me. Those thought experiments. Unfortunately, I didn’t go to school for the math, so I can never really wrap my brain around those kind of theoretical things. I can never comprehend them, and that is disappointing.

I think I missed my particle physics boat! But what I love so much is there was was this documentary about the Higgs boson, and how it was a race, and I cried so hard watching Mr. Higgs finally see his boson. I feel like science and art are cousins. I feel peripherally involved in the process of discovery.

As you were coming up with Holtzmann’s character, did you have an affinity for any of the original Ghostbusters?

All of the characters are definitely not analogous to the original characters. We were each doing something different, but I did love Bill Murray’s innocent lecherousness, and I wanted to bring an element of that. That, juxtaposed with what we typically think of as a scientist, makes for a good comedic character.

Paul Feig has said the character was inspired by some of your traits. Did you ever ask Paul what traits those were?

I am not sure I want to know.