A Super Hot, Rocky Planet Has Been Discovered Just 21 Light Years Away 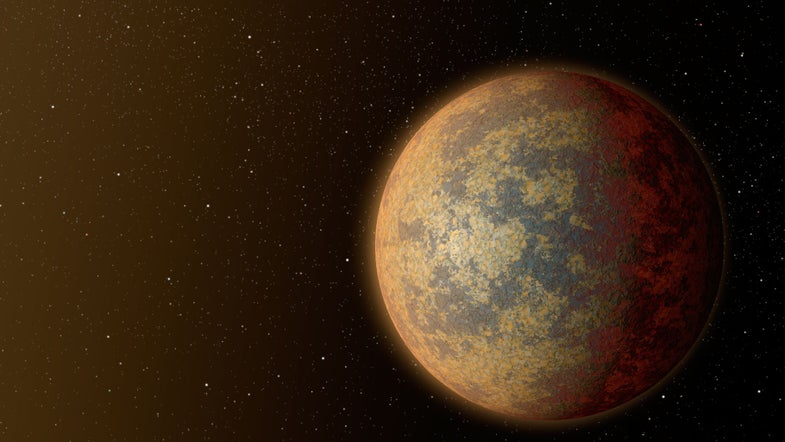 The galaxy is a pretty big place, so NASA’s announcement today that scientists have discovered a solid, rocky planet located just 21 light years away from our own solar system is the cosmic equivalent of suddenly noticing a longtime neighbor just down the street. The world, unflatteringly named HD 219134b, is 1.6 times the size of Earth, but it’s 4.5 times as massive. And it’s much hotter, with a surface temperature estimated to be about 800 degrees Fahrenheit (427 Celsius), as the AFP reported — far too hot to support life as we know it.

The reason for the high surface temp is primarily because the planet orbits much closer to its star than Earth is to the Sun, with a year equivalent to just three Earth days.

Still, the discovery — made using NASA’s Spitzer Space Telescope and the HARPS-North instrument on the Galileo National Telescope in the Canary Islands — is quite exciting, especially because it’s the closest planet yet found that can also be seen passing in front of its star (transiting). This makes it possible for scientists to study it in fine detail using telescopes on the ground and in space, which is exactly what they plant to do next, potentially uncovering the chemical composition of its atmosphere and other features about conditions on its surface. “This exoplanet will be one of the most studied for decades to come,” said Michael Werner, Spitzer project scientist at NASA’s Jet Propulsion Laboratory, in a statement.

There is a closer exoplanet (that’s a planet orbiting another star than the Sun) called GJ674b that’s just 14.8 light years away, but it hasn’t been observed transiting, making it more difficult to study. All the more reason to raise a celebratory toast to our new neighbor, HD 219134b.