Ever heard of giant bacteria? This new species is way bigger and weirder. 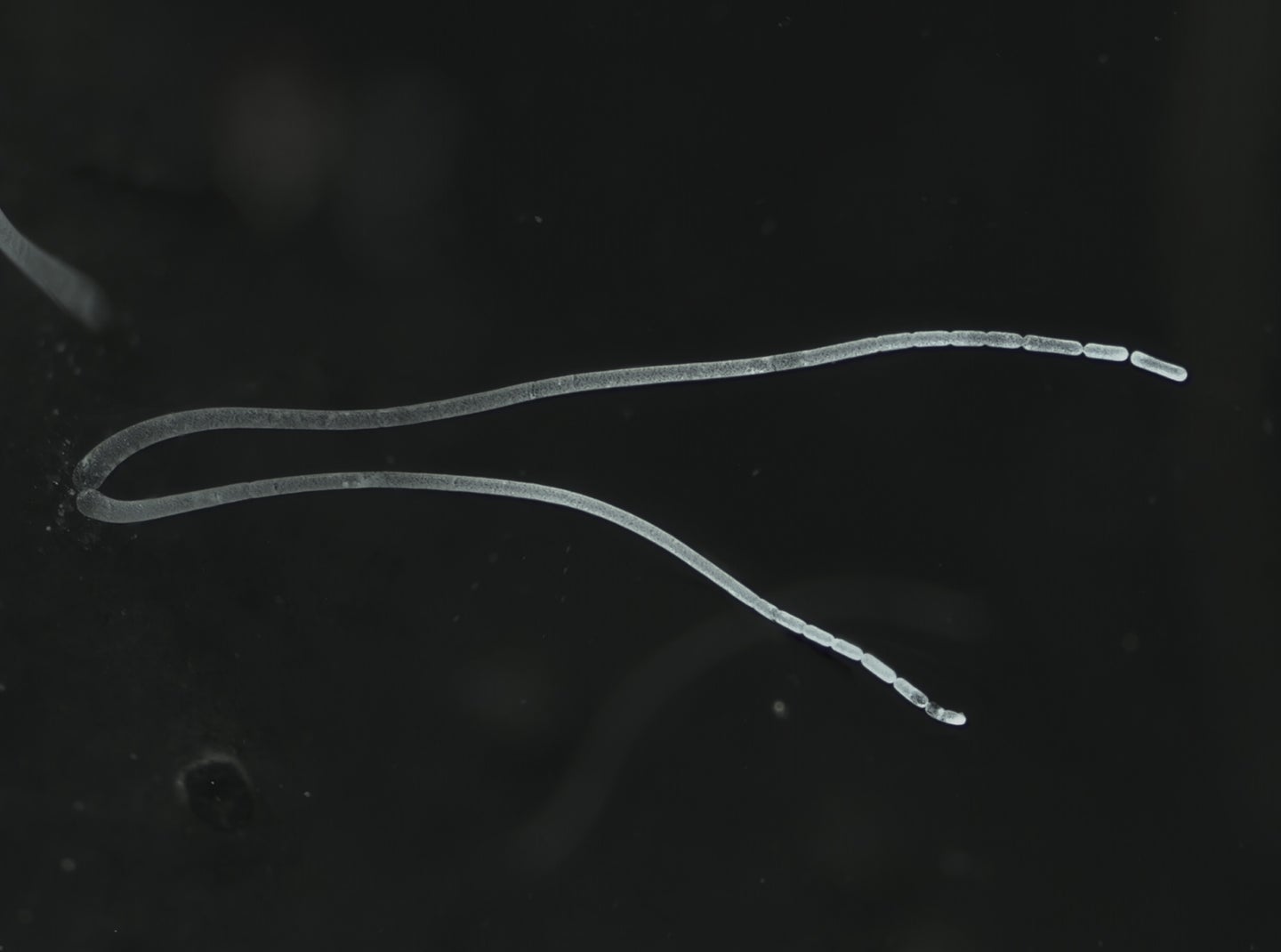 Filaments of Ca. Thiomargarita magnifica. A team of researchers have characterized a bacterium composed of a single cell that is 5,000 times larger than other bacteria. Jean-Marie Volland, Lawrence Berkeley National Labor
SHARE

When Olivier Gros, a marine biologist and professor at the University of the French Antilles in Guadeloupe, went looking for microbes in the warm ocean waters of the southern Caribbean, he wasn’t trying to find a new bacteria species that would challenge the traditional understanding of how microscopic cells work. But in the rich sediment of the mangrove systems along the sea, that’s what he got.

The new species, now named Ca. Thiomargarita magnifica, is the largest bacterium ever found. It grows up to 2 centimeters long—making visible to the naked eye—and is 5,000 times bigger than some other bacteria. And while this alone is notable, its surprisingly complex cell structure distinguishes it even further from others of its kind. A study published today in the journal Science explains how Gros and other researchers from the Joint Genome Institute (JGI), a project run by the US Department of Energy, and the University of the French Antilles in Guadeloupe discovered and identified this category-defying bacteria.

T. magnifica is a single-celled organism that looks like a thin, white vermicelli noodle. It belongs to the genus Thiomargarita, also known as the giant bacteria—though this species is 50 times larger than any member of its group. Gros found this sulfur-oxidizing bacteria attached to the sediment under waterlogged mangrove trees around Guadeloupe. So far, the researchers say they haven’t found the species anywhere else. The initial discovery was made in 2009, but the analysis and publication were delayed because the specimens are only seasonally available in the field. (Microbiologists have not yet determined the pattern of their timing.)

It also took Gros’s team a while to recognize that the specimen could even be a bacteria, given that they could see it without a microscope, which is typically required to observe most bacteria. But with further study, Silvina Gonzalez-Rizzo, an associate professor of molecular biology at the University of the French Antilles and an author on the paper, used genetic sequencing to identify it as prokaryotic—and more specifically, a bacteria.

“I thought they were eukaryotes … because they were so big with seemingly a lot of filaments,” Gonzalez-Rizzo said in a press release. “The fact that they were ‘macro’ microbes was fascinating!”

[Related: Can you guess the tiny objects in these zoomed-in photos?]

Generally, life categorized by cells is divided into two groups: prokaryotes, which include bacteria and other single-celled microbes called archaea, and eukaryotes, which include everything from algae to humans. Scientists believe that eukaryotes evolved from prokaryotes around 2.7 billion years ago, which has created several key differences between the two. The biggest distinction is that eukaryotic cells have a well-defined nucleus containing the cell’s DNA, while prokaryotic cells don’t; their DNA floats freely through the cell instead.

T. magnifica doesn’t abide by those rules, however. Not only is it exponentially larger than most bacteria, it also holds its DNA in a membrane—like a more complex eukaryotic cell. Jean-Marie Volland, a scientist with joint appointments at the JGI and the Laboratory for Research in Complex Systems, used various microscopy techniques to identify these novel, membrane-bound compartments containing DNA.

The species’s nonconformity is puzzling, even to researchers who’ve seen bacteria of all forms and functions. A prokaryotic cell exhibiting eukaryotic traits questions long-held classification rules.

“I tend to be very critical of anything that’s unusual,” says Tanja Woyke, microbial genome program head for JGI, who helped design the T. magnifica study to ensure consistency in results. “So we had a lot of discussions about the proper controls in our research and were overly cautious. Big claims require big proof.”

In addition to its astounding size and DNA organization, T. magnifica also has three times the amount of genes than most bacteria. Woyke says this abundance could enable the organism to respond to local stimuli, and turn on isolated genes in different parts of its cell. For example, if one area needs to make more oxygen, it could crank up production locally.

Another way T. magnifica differs from other bacteria is that it has a dimorphic life cycle and reproduces through budding. Through this process, the long filament cell will constrict at one point and grow a seminal bud that will release, settle into the environment, attach to a new substrate, and grow into a new, identical-looking individual. This life cycle has never been observed before at this scale, Volland says.

Only 1 percent of the genes are transmitted to the daughter cells through this budding process, but that doesn’t mean the rest is random. While it’s common to see genetic variation across bacterial cells, because T. magnifica passes such a low percentage of its genetics on to its progeny, it might be natural to think there would be a lot of diversity in its case, too. However, in the thousands of genome copies that the team sequenced, Volland’s team noted there were very few variations—meaning that despite the minimal transfer, the genome copies are nearly identical.

“One of the big questions for this looking forward is figuring out how this bacteria maintains homogeneity,” Volland says. This is a question he wants to pursue in the future.

[Related: The secret to vinegar’s tangy flavor lies in bacteria]

For Woyke and Volland, this discovery isn’t just about introducing a new bacteria in the scientific record—it also suggests that there are new ways to identify organisms that might not have considered before. Microbiologists look at microscopic organisms, Volland says, so there’s a bias in research toward bacteria that can be seen under a microscope. His team’s finding shows that experts can think outside the box and look for traits that might not be typical to their study subjects. It’s about challenging confirmation bias, Volland says.

“We have this unique opportunity now to look at a currently living microbe that is evolving towards larger size, DNA compartmentalization, and all these issues of biological complexity,” Volland says. “Sometimes this research is hard because you have to go back in time and look for hidden sequences in data. But with this species, we can use it as a modern system to ask questions about what is key for bacteria to evolve to grow.”