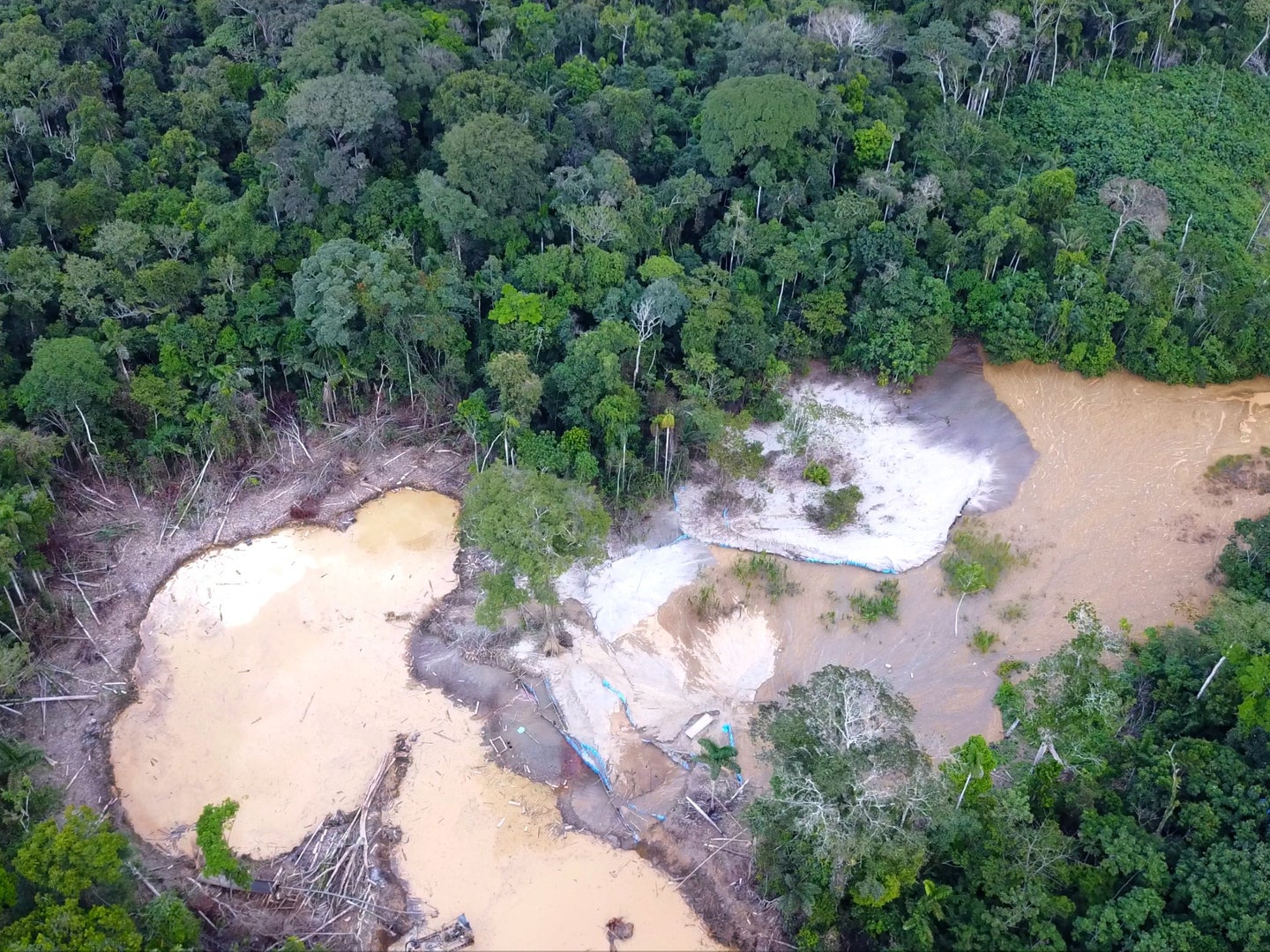 Soaring gold prices, coupled with law enforcement withdrawal from mining areas in several countries, has allowed illegal mining to expand further into Indigenous territories. If Not Us Then Who/Jaye Renold (ifnotusthenwho.me)
SHARE

When COVID-19 reached the Amazon rainforest, the regular hum of speedboats and canoes carrying goods through Amazonian rivers almost went silent, says José Gregorio Díaz, a member of the Wakuenai Kurripaco Tribe. But there was a sound that never stopped, Díaz says. It was the roar of barges ferrying dredgers to extract gold from Indigenous lands illegally. “No one else was moving; everything had shut down,” he says. “It became evident to us that they had the authorization to keep digging because neither the military nor the illegal groups that control these areas were stopping them.”

What Díaz saw in his village is not an isolated case. Throughout the Amazon, the biodiverse forest that occupies 40 percent of South America, skyrocketed gold prices, which have increased 35 percent this year, sharpened the “gold rush” that has been destroying Indigenous lands for years, a new report found. “I’ve been working with [Indigenous communities] for over 15 years,” says Díaz, who’s also the general coordinator of COICA, the biggest Indigenous organization in the region. “We [have] never faced a crisis like this. It feels like this is an attempt to exterminate us.”

The analysis, published by the World Resources Institute (WRI) this week, was done through a partnership between WRI and the Amazon Geo-referenced Socio-environmental Information Network (RAISG). It found that the soaring gold prices, coupled with law enforcement withdrawal from mining areas in several countries, has allowed illegal mining to expand further into Indigenous territories.

“The pandemic made things worse, for sure,” says Peter Veit, co-author of the paper. “But the gold rush in the Amazon started well before COVID, I would say about eight or nine years ago.” And it doesn’t confine to illegality: The report found that industrial mining covers approximately 316 million acres (1.28 million square kilometers), more than 18 percent of the Amazon. Both legal and illegal mining sites overlap with 20 percent of all Indigenous lands in the Amazon. In those areas, deforestation rates are up to three times higher than in places where there is no mining, the report found.

Illegal mining, particularly of gold, has become an important source of income for many. Small-scale miners, oftentimes called “garimpeiros”, have been working in the Amazon for decades, says Díaz. But in the last two decades, they grew in numbers, partly because gold prices have not stopped rising. As a result, it is estimated that today there are more than 500,000 small-scale gold miners in the Amazon, the report found. Most people are poor peasants and Indigenous people trying to make a living by digging the land, driving the speedboats that transport the gold, or cooking for the miners.

About a decade ago, some of the garimpeiros started working closely with the drug trafficking groups moving cocaine and coca leaves across the region, since gold is an effective way to launder money. Its price is now even higher than coca, the report says. “If you come here, I assure you that you will see as many illegal mining sites as illegal airplane runways,” Díaz says. By 2019, Latin America had become the most dangerous region globally to be an environmental advocate, a report by Global Witness found. The region accounted for two-thirds of the 212 murders that year (Colombia saw 64 killings of environmental leaders, the highest recorded in a single year for any country). Opposing legal or illegal mining became the most dangerous environmental advocacy.

But the ones controlling the operations are still a mystery, says Larissa Rodríguez, a researcher at the Instituto Escolha, in Brazil. And even if each operation is small, as a whole, this activity accounts for one-third of the 100 tons of gold dug in Brazil every year, Rodríguez says. In 2016, researchers found that around 28 percent of gold mined in Peru, 77 percent in Ecuador, and 80 percent in Colombia and Venezuela had been illegally extracted.

The lack of control in the purchase and sale of gold in remote regions could explain, in part, the proliferation of illegal mining sites, explains Rodríguez. In Brazil, for example, garimpeiros can’t sell gold for jewelry, so they have to sell it to financial institutions. The local branches of banks are small shops, where every purchase is registered in paper. “By obligation, the small shop needs to ask the name of the person selling the gold and where it comes from. But it’s not electronic, it’s just pieces of paper where garimpeiros write their names and the alleged origin of gold by hand,” Rodríguez explains. Later, when the gold is shipped to banks’ central offices, no one checks that every ounce of gold really has been extracted from the places that they supposedly did. Legally prosecuting is hard as public officers need to review thousands of handwritten papers that often lead to dead ends.

Even if the details are different in other countries, the general issue is similar: Local buyers can’t, or don’t, check where the gold comes from. Once the bigger players buy that gold, it becomes nearly impossible to trace the origin. “We know we need to get the big guys involved. We need to force financial institutions to regulate where their gold is coming from,” says Rodríguez.

Governments will have to change their approach if they want real change, said Eleodoro Mayorga Alba, former minister of mines for Peru, in a press release. In fact, in the nine Amazon countries, “governments either own the mineral resources [in Indigenous lands] or control them, so Indigenous Peoples can neither prohibit miners with government permits from entering their lands nor fully access the minerals within their territories,” says Patricia Quijano Vallejos, co-author of the new paper in the same release.

For José Gregorio Díaz, providing Indigenous People with the tools to effectively monitor their lands is key, just like reshaping environmental and deforestation policies. “Our governments and the rest of the world need to understand that they can’t save nature without us,” he says. “We are invited to every climate convention, but we are always hanging out in the hallways. It’s time we are invited to the table where decisions are being made.”