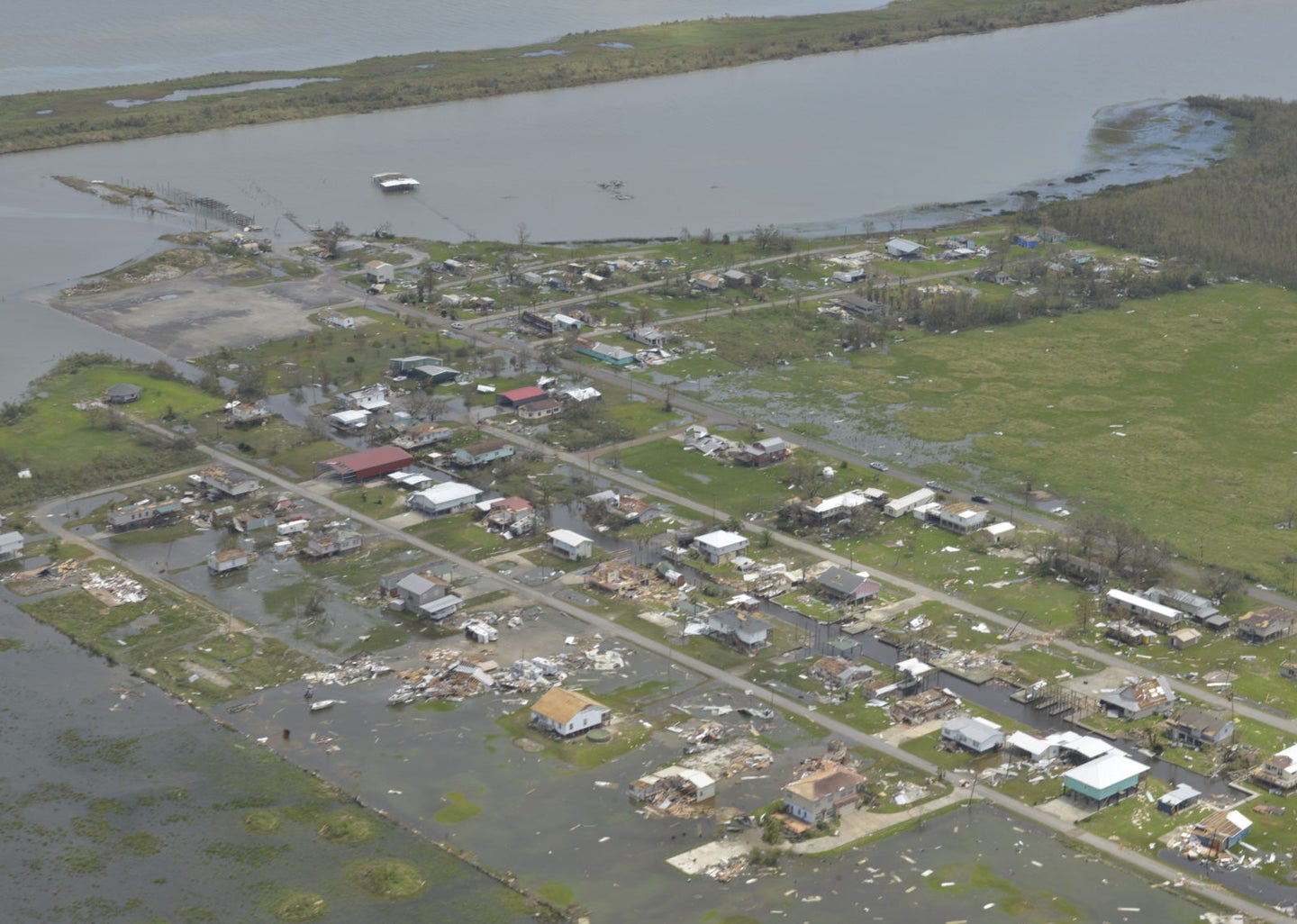 When Hurricane Laura slammed into Lake Charles, Louisiana at the end of August, it downed power lines, felled trees and stripped roofs off houses in its path. After the storm passed and the skies cleared, it was time to rebuild. But in 2020, that would be no easy task.

This year has seen so many named storms—Laura, Marco, Nana, Omar—that the World Meteorological Organization exhausted the Roman alphabet. For only the second time in history, it started naming storms after the letters of the Greek alphabet. Lake Charles was still getting back on its feet when Hurricane Delta hit in early October.

“I’m 63 years old, and in my lifetime, that was the first time that happened,” says Lake Charles resident Mark Thibodeaux. “It’s going to probably be a minute getting things back to normal. I would say six months to a year, but some folks think it’s going to take longer than that.”

Just as severe heat in California has kept forests ablaze, uncommonly warm waters in the Gulf of Mexico have fueled this year’s hurricanes. The dual disasters have made recovery especially difficult.

Thibodeaux said that Hurricane Laura tore up his roof. It took weeks to collect the insurance money and hire workers to make the needed repairs. In the meantime, water continued to leak into his home, allowing mold to grow. While he was able to fix his roof before Hurricane Delta hit, he wasn’t able to get rid of the mold.

Thibodeaux couldn’t stay in his home, but he also couldn’t find lodging nearby. Because the city was still recovering from Laura, hotels were filled with workers who had come to rebuild the city. Thibodeaux had to drive to Houston to find somewhere to shelter during Hurricane Delta.

“It can be discouraging,” says Thibodeaux. “You gotta keep your head up and keep moving forward.”

Hilton Kelley, an environmental leader in Port Arthur, Texas, helped with the recovery in Lake Charles. He had volunteered to clear trees knocked down during Hurricane Laura when Delta began to move in.

“I was geared up to go out there with my chainsaw. I had six of my men lined up,” he says. “We had to cancel because of Hurricane Delta in the Gulf.”

The one-two punch of Delta and Laura devastated the city and drove thousands of people to seek shelter elsewhere in the region, in cities like New Orleans and Houston. The stunted recovery in Lake Charles has made it hard to find their way home.

“We have several thousand Lake Charles evacuees in New Orleans, and the state has been steadily trying to move them closer to Lake Charles, but it’s not easy,” says Beth Butler, executive director of A Community Voice, a nonprofit based in New Orleans. She says many survivors have been ushered to other states.

The chaos of this year’s hurricane season is highly unusual. The Atlantic Ocean sees around 12 named storms a year, on average. In 2005, it saw 28, the most on record. That year, hurricanes Katrina and Rita hit Louisiana just a few weeks apart. This year could see more than 30 named storms, an unprecedented figure. Recent record-breaking heat may have something to do with it.

Hurricanes act as a kind of release valve for surplus heat, a way for oceans to discharge energy that builds up during the warm months. As the planet heats up, scientists expect hurricanes to grow larger, more intense, longer-lasting or more numerous—or some combination thereof.

Climate models suggest hurricanes will become more intense but less numerous further into the future, but the models may have it wrong, says Kevin Trenberth, a distinguished senior scientist at the National Center of Atmospheric Research. He says that, yes, warmer waters may yield a small number of very intense hurricanes, but they could also produce a larger number of less powerful cyclones.

“If you have enough small storms, maybe that will alleviate the big storms,” he says. “This year, there have been quite a lot of storms, but there haven’t really been any major blockbuster storms like Harvey, Maria or Irma in 2017.”

More storms may not be a silver lining. Even if hurricanes are less powerful, their regularity makes recovery difficult. Kelley says, amid a string of disasters and an ongoing pandemic, the federal response has also been slow and meager, leaving residents without the urgent help they need to recover or rebuild. He described trailer parks that were leveled and apartment complexes that were rendered uninhabitable after recent storms.

The Federal Emergency Management Agency is currently working with local nonprofits and volunteer agencies to aid the recovery, and it has distributed nearly $120 million to Hurricane Laura survivors in Calcasieu Parish, which includes Lake Charles, according to a spokesperson. Kelley, however, maintains the recent events in Lake Charles highlight the need for a more rapid and robust federal response to all climate-fueled disasters.

“We are living in a real dire situation right now, and we need all the help we can get from this federal government, no matter whether we are poor or rich,” he says. “People need assistance. It’s a matter of life and death.”