Researchers are trying to extend the tropical storm record by looking inside ancient coastal trees. 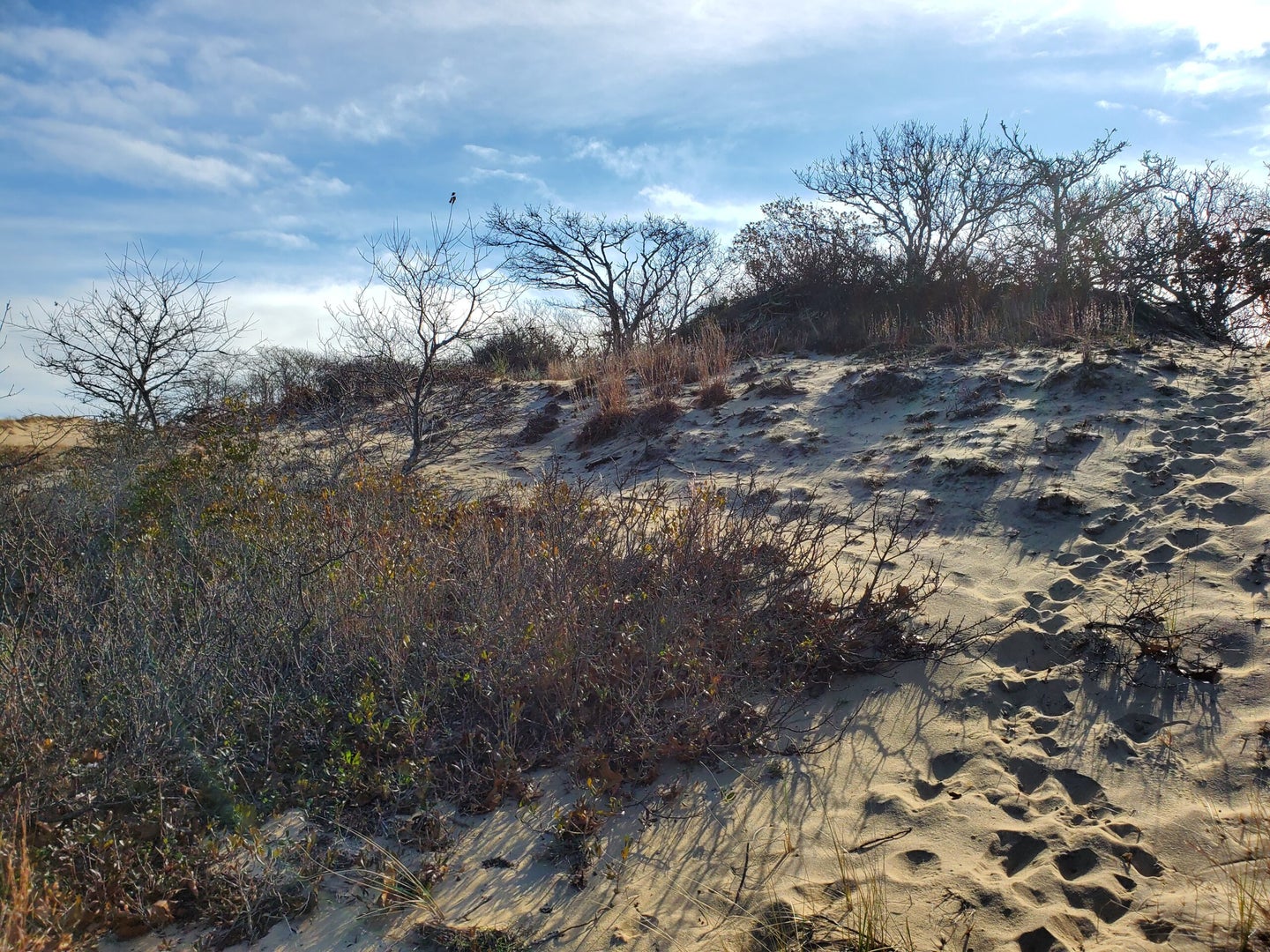 On the eastern edge of the southern fork of Long Island, where most obvious signs of humans disappear, sand dunes sweep into the horizon, gradually rising up to 80 ft high. The landscape is continually shaped by the wind, which pushes ‘the walking dunes’ inland by a few feet every year. Some of the trees, weathered by the wind and ocean spray, have trunks that tilt at nearly a right angle like they are about to snap. Others have limbs that sprawl in every direction.

“Look at this oak. It’s like a monster. It’s like an organism,” says Nicole Davi, a tree ring scientist at Columbia’s Lamont-Doherty Earth Observatory and William Paterson University. She peers at the impossibly gangly, twisted tree, rising from the sand like it is suspended in motion.

These stands of gnarled trees inside Hither Hills State Park are among the last of New York’s maritime forests, which have been cleared for development over the years and are threatened by worsening sea-level rise. All along the eastern seaboard, maritime forests like this one are becoming ghosts, inundated with so much salt-water that they die from the roots up. This process is only exacerbated by hurricanes, which can quickly kill trees with high winds and water. Even the spared trees will typically grow more slowly in the aftermath.

I join Davi in collecting samples of the surviving trees, which contain in their rings the signs of past hurricanes. If a storm damages and dramatically slows the growth of a tree, the tree ring will be much narrower than normal. With enough data, researchers like Davi can analyze the patterns, enabling the tree rings to act as a proxy hurricane record for the region. This data could even go beyond meteorological records—in theory extending as far as back the oldest trees.

Davi received a tip from Edward Cook, who directs the Tree Ring Research Laboratory at the Lamont-Doherty Earth Observatory, about a stand of old oak trees he observed in 1983 at Hither Hills State Park. Judging by rings, the oldest tree he found dated back to 1736, which remains today the oldest documented oak on Long Island. Now, 40 years later, Davi is searching for this centuries-old patch of trees on the off-chance that they’ve survived.

Fortunately, Cook has a precise memory of the trees he saw that day and the location of the oldest oaks.”I remember quite vividly that the bottom of the crown of the tree, which was probably about a foot in diameter, was only about one foot above the sand. No one’s ever figured out why, but I’ve speculated that it could have been from the 1938 hurricane, which was a massive storm that came right over Long Island,” Cook told me over the phone.

Davi isn’t sure how likely it is that we’ll find the trees. It’s hard to say, after all, what’s happened to them in the decades since Cook stumbled upon them. Hurricane Sandy, which killed thousands of trees in New York and New Jersey, could have been their death knell.

We continue along a trail sketched through the sand and bristling grasses until we arrive at a promising stand of old oaks with thick, crooked limbs. There’s no way to tell how old they are just by looking, but there are good indicators.”They have fatter limbs. Sometimes they look twisty or they look older—you know, thicker branches,” Davi says. The only way to actually know the age is by coring, which involves twisting a hollowed hand-drill, known as an increment borer, into the center of the tree in order to extract a sample.

So, crouching on the ground, Davi twists the borer into one of the trunks. She notes that its wide limbs could also be an indication of quick growth, potentially aided by the nearby pond, rather than its age. After removing the pencil-sized sample, she examines the wood with bands of varying shades of brown and estimates that the tree is about a hundred years old — not quite as old as she hoped. To find the precise age, she’ll have to take the core back to her lab and date it.

Along with the width and number of the rings, Davi is also interested in studying the oxygen isotope record, which varies depending on the composition of the water the tree intakes. “Rain that comes out of a tropical cycle has a different isotopic signature than just regular rain,” she says. “So, we want to see if we can identify that isotopic signature in years that have large destructive tropical cyclones.” This data will hopefully help link the narrow tree bands, indicative of slower growth, to hurricane damage.

From there, Davi hopes to narrow down the most important factors that influence tree damage from hurricanes, such as the location on the shore or wind speed, by cross-analyzing with historical records. This research can give her insights into how the trees will respond to future storms—an increasingly important question as climate change fuels worsening hurricanes and erodes the shorelines of the last maritime forests.

While the study of hurricanes with tree rings is still quite novel, Valerie Trouet, a tree ring scientist at the Laboratory of Tree-Ring Research at the University of Arizona, envisions this work potentially strengthening climate modeling. A 2016 study she performed extended the hurricane record in the Caribbean by 350 years. By offering a longer range of data on hurricanes, Trouet says she can potentially see this research helping scientists more clearly attribute changes in hurricanes to climate change.

Davi is also gathering samples from other remaining forests; a maritime oak-holly forest behind the dunes of Fire Island in New York and a relatively undisturbed holly forest on the Sandy Hook peninsula in New Jersey. She’s not exactly sure when she’ll be able to publish a study based on this work, given that research is still in the early phases and she doesn’t have the support of an outside grant.

The day after our trip Davi joins Edward Cook to search again for the old oak trees. This time, Cook quickly leads them to where his memory recalled the stand being and they proceeded to sample a number of trees, which turned out to be over 200 years old. Davi is getting closer, but still hasn’t quite found the 300-year old oak trees. “I don’t if they’re gone, or if we just haven’t found them yet,” says Davi. She plans to keep searching.