Megapixels: The ancient rock offers a glimpse of how this freshwater species behaved in unison. 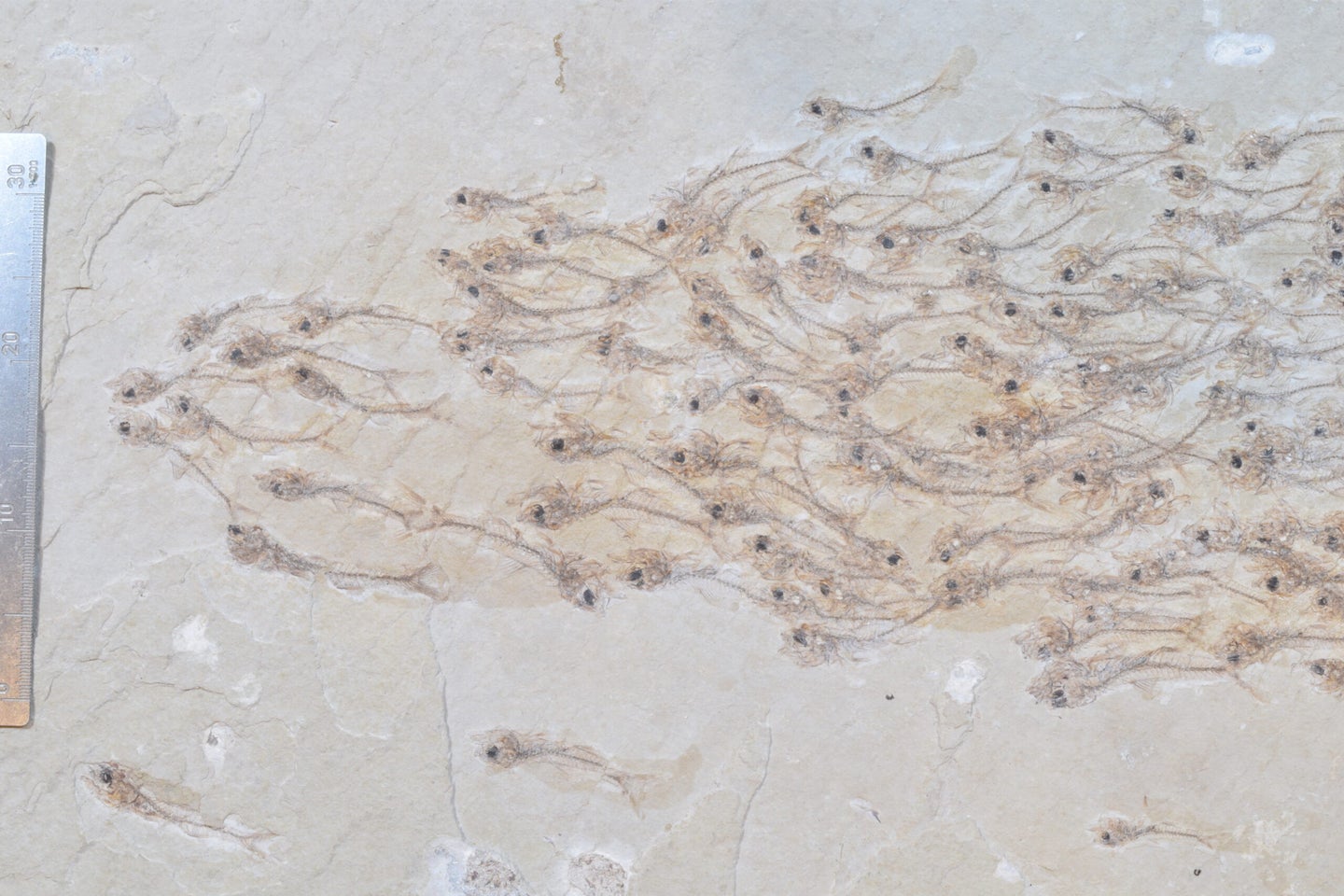 To confirm the ancient fish were shoaling, researchers measured ran a simulation based on the animals' proximity to one another, and the way they were facing. Mizumoto et al./Proceedings of the Royal Society B
SHARE

It’s not clear what overtook this school of fish, but the remnant—an untimely demise etched in a limestone slab for all eternity—is a breathtaking glimpse of ancient fish shoaling.

A social behavior still common in today’s oceans, shoaling involves small marine animals moving collectively to guard against predators. Fish swim in oblong formations, huddling together to avoid being swallowed. “Shoaling is one of the most impressive behavior patterns found in nature,” says Nobuaki Mizumoto, a behavioral scientist at Arizona State University who authored a new study on the fossil.

Until now, scientists could only guess that this extinct freshwater species, Erismatopterus levatus, moved in unison. But the 50-million-year-old fossil, hoisted from the Green River Formation in Colorado, Wyoming and Utah, captured 259 of the fish in a forward-facing school.

The fossil became the centerpiece of a study published Wednesday in Proceedings of the Royal Society B. Researchers used the fish impressions to build a digital map of the school, measuring each fish along with its proximity to its neighbors. To bring the fossilized image to life, they ran 1,000 simulations using that map to infer each fish’s next, slight movement.

Based on that simulation, the researchers concluded that the fish were not moving at random, but collectively. They repelled their closest neighbors to keep from colliding, and attracted their more distant neighbors to maintain the formation.

While there are definitely limitations in extracting 3D scenes from a 2D image, if the theory holds true, it would mean fish have been swimming in shoals for at least 50 million years, Mizumoto says. And it’s a trait that evolved independently in this ancient Eocene species from the lineages of fish we see shoaling today. That could be a tribute to its success as a preservation tactic against predators

The fossil is a rare and useful find, as its photographic-like quality allows researchers to explore ancient social behavior. The authors note in the paper that social interaction of extinct animals has been previously “thought to leave no fossil record.”

For a group of swimming fish to be caught and imprinted into limestone in this way, fossilization would have had to happen extremely quickly. The authors posit that a sand dune could have collapsed onto the shoal in shallow waters, catching the moment in time and preserving the fish in formation. But save for future research, their true demise will remain a mystery.