How to hunt for star-nosed moles (and their holes)

To find the subterranean species, a biologist has to lay a clever trap. 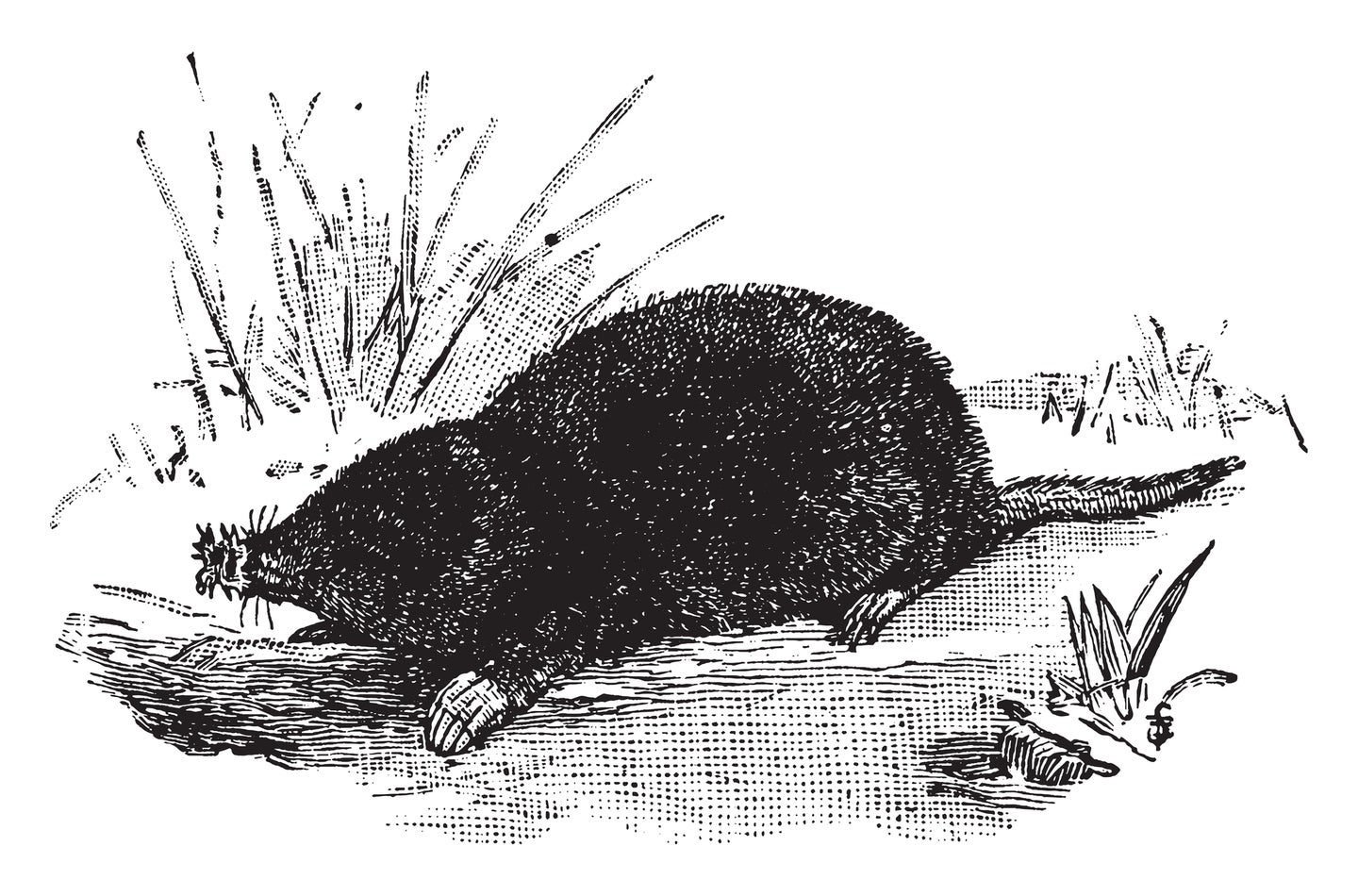 Star-nosed moles range much of the Eastern US and Canada, but they're not too easy to spot, given their underground hideouts. Morphart/Deposit Photos
SHARE

Imagine you have moles in your yard (maybe you don’t have to imagine). What if I asked you to catch one? It can be done, but it’s not easy. Moles can detect your softest footsteps, and they are especially alert for sounds of digging. They know every inch of their tunnels like the back of their giant, clawed forepaws, and they avoid areas that have been disturbed. They have escape routes from their main tunnels and escape routes from their escape routes. When cornered, they dig a short tunnel and then backfill the entrance, magically disappearing as if through a secret door, and you’ll never guess they’re sitting just a few inches away. Plus, they have special hemoglobin in their blood, allowing them to survive in that secret hideaway with little oxygen and high levels of carbon dioxide, until a predator (or a biologist) loses patience. It’s hard to catch one, even when the tunnels are clearly outlined on a manicured lawn.

But star-nosed moles don’t live in suburban neighborhoods. They live in the moist and muddy soil of wetlands, swamps, and bogs, and their tunnels can be nearly anywhere in a complex overgrown wilderness. They live throughout much of the northeastern US and are not threatened or endangered, but they are mighty hard to find. That’s partly because you can’t see their tunnels. But also because many other small mammals live in wetlands, so even if you locate a tunnel, there’s no knowing who made it or who’s using it.

I had only a vague understanding of all this when I set out for Pennsylvania in a rented cargo van with a sleeping bag and a cooler full of hundreds of earthworms to feed hungry moles. It was a time in my life when sleep seemed overrated, and I could live for weeks on atrocious junk food. I brought a few bags of groceries, a pair of rubber boots, and a bundle of older clothes that I didn’t mind destroying. I splurged on flashlights—one light bulb didn’t seem sufficient for wandering around the foggy forest in the middle of the night. The plan was simple—meet Bill McShae in rural Pennsylvania and learn how to trap star-nosed moles.

The rendezvous was a beautiful piece of land with lush grasses, a small stream, and a forested foothill in the background. I got out of the van as McShae approached, and I could already picture us walking together up the hill and following babbling brooks into the sunshine as he pointed out the details of the mole’s habitat. This was surely going to be easier than I thought.

After brief introductions, he told me to follow him, but he went the wrong way. Instead of taking my imagined path up the sun-dappled hillside, we trekked downhill toward the muck and tussocks of a low-lying swampy area not far from the access road. It didn’t take me long to realize that catching star-nosed moles did not include hopping from stone to stone along clear mountain streams like a wood elf. It was more the job of Gollum, kneeling in the muck of the lowlands, head down, digging with bare hands alongside the grubs and earthworms. I was surprised but not disappointed. I didn’t care where I had to look—I was on a mission for the National Zoo.

I hung on McShea’s every word, but my trapping lesson was surprisingly short. He showed me what a mole tunnel usually looks like, where they tend to dig, how to set and check a Sherman trap (a small, metal box with a spring-loaded door), how often to check traps (every three to four hours, day and night), and how to clean traps (throw them into the stream). He said that each of the hundred or so traps was quite expensive. It all seemed do-able, since he had already scoped out the area, found tunnels, and had caught star-nosed moles there before. Then came the shocker. The land belonged to his in-laws, and they didn’t want anyone else on the property. I would need to take the traps and find another place. How was I going to find another place? Thirty minutes after my lesson began, I was turned loose with my Pennsylvania map, my van full of supplies, and the traps.

People often reminisce about forks in life’s road, though it’s usually a metaphor. There was nothing metaphorical about my predicament. Which of the many roads would lead me to this legendary creature? It’s not as if a cure for cancer lay in the balance, and yet I had somehow landed at the nexus of an exciting research project at a very early stage in my (hoped for) career. Everything depended on my next choices.

I won’t try to describe, nor do I remember, the hundreds of miles that I drove with one eye on the road and one eye scouring the passing countryside. Northern Pennsylvania is a beautiful mix of foothills and valleys, and through each valley inevitably runs a myriad of branching streams in the midst of a floodplain. It is the perfect geographical recipe for creating expansive wetlands—and therefore the perfect habitat for star-nosed moles. And yet there were many limitations. Often the best places were inaccessible without a long hike from the road, and that was impractical. Some accessible areas were plastered with “No Trespassing” signs. Some perfect locations were within state park borders where my scientific collecting permit wasn’t valid.

Finally, I looked out my window into a beautiful little valley with what seemed to be the perfect expanse of wetland. It wasn’t too far from the road and was only a few miles from a park where I could sleep in the van. There was only one catch—the land was directly adjacent to a cabin, and I had been warned by park rangers to be careful about trespassing. They had only told me about one property that was particularly dangerous, but any story that involves a shotgun resonates well beyond its intended borders. To be safe, I always parked at the other end of the valley and entered the wetland from there, giving the cabin a wide birth.

Things looked promising from the outset; there were lots of tunnels and many grass runways that looked heavily traveled by small mammals. In some tunnels I could even see overlapping sets of miniature footprints. I spent the next day digging holes, setting traps, and walking the trap line. That sums it up in the same way that a triathlon is just a few hours spent swimming, biking, and running.

It didn’t take long for things to get interesting. Every few hours I found at least 10 traps with closed doors, and what followed was a crash course in mammal diversity. I opened each trap into a bucket, hoping for a star-nosed mole and letting everything else loose. First I found voles, with large eyes and sharp incisors. Next were short-tailed shrews, with reddish teeth and venomous saliva. There were water shrews, with long tails and fuzzy feet for paddling. When I released them next to a stream, I was astonished—they swam away like fish, disappearing into submerged vegetation on the opposite side. Other shrews were impossibly small (masked shrews), weighing only a few grams—about the weight of a penny. They had superhuman speed and could run up my arm and jump into the weeds before I could react.

One trap was shaking violently as I approached and felt heavy when lifted (the traps are a little smaller than a brick). When I cracked open the door for a peak, all I saw was a riot of fur. I gently lowered the trap into a bucket and pulled loose the wires that held it together. Then I stood back. A beautiful creature unfolded itself and emerged like a cartoon caricature of mischief and intelligence. I had set the trap in a grassy area where there happened to be a half-eaten vole carcass. This was obviously the culprit, a short-tailed weasel. It explored the bucket, and then leapt onto the rim, made several circuits, hopped down, and casually disappeared into the overgrown grass.

Finally, it happened. I picked up a trap and tilted open the door to see a pink, fleshy star staring back at me. It seemed a miracle—actually two miracles. The first was finally catching the legendary creature. The second was simply the mole’s existence; it was so different from all the other little mammals in the wetland. I hurriedly filled a plastic container with wet dirt and leaves and added a generous helping of earthworms. Then I carefully opened the trap and watched as the mole used its powerful front legs—as if doing a breaststroke—to burrow down into the leaves and dirt, disappearing in only a few seconds.

That’s how things went, with slight variations, every few hours for days. Except with the work came a gift I hadn’t anticipated. Because there wasn’t much time between checking the traps, there was no point driving back to the park to sit alone on a bench. Instead, I took to spending whole days in the wetland, watching and listening. I found an old piece of tangled fishing line, hook and all, in a bush next to one of the streams, and I fished (successfully) for the first time in a decade. I slept in the sunshine on a large tussock and woke to the sound of deer walking on the hillside. I watched wood turtles make their plodding way through the underbrush. Time slowed and I stopped thinking about daily distractions, like the classes I would take in the fall, or the class I had agreed to teach, or the frantic drives back and forth from the university to the zoo in beltway traffic, or the upcoming Graduate Record Exams (and how I was short on botany). I simply lived in the moment surrounded by nature.

In any case, after about a week I had caught five star-nosed moles, more than I had expected under the best of circumstances. It was time to head back to Washington. I parked at the far end of the valley as usual, pulled up all the traps, cleaned them in the stream, and packed the last of the equipment into the van.