Rhesus monkeys who are more social have a higher abundance of beneficial gut bacteria, according to one study. 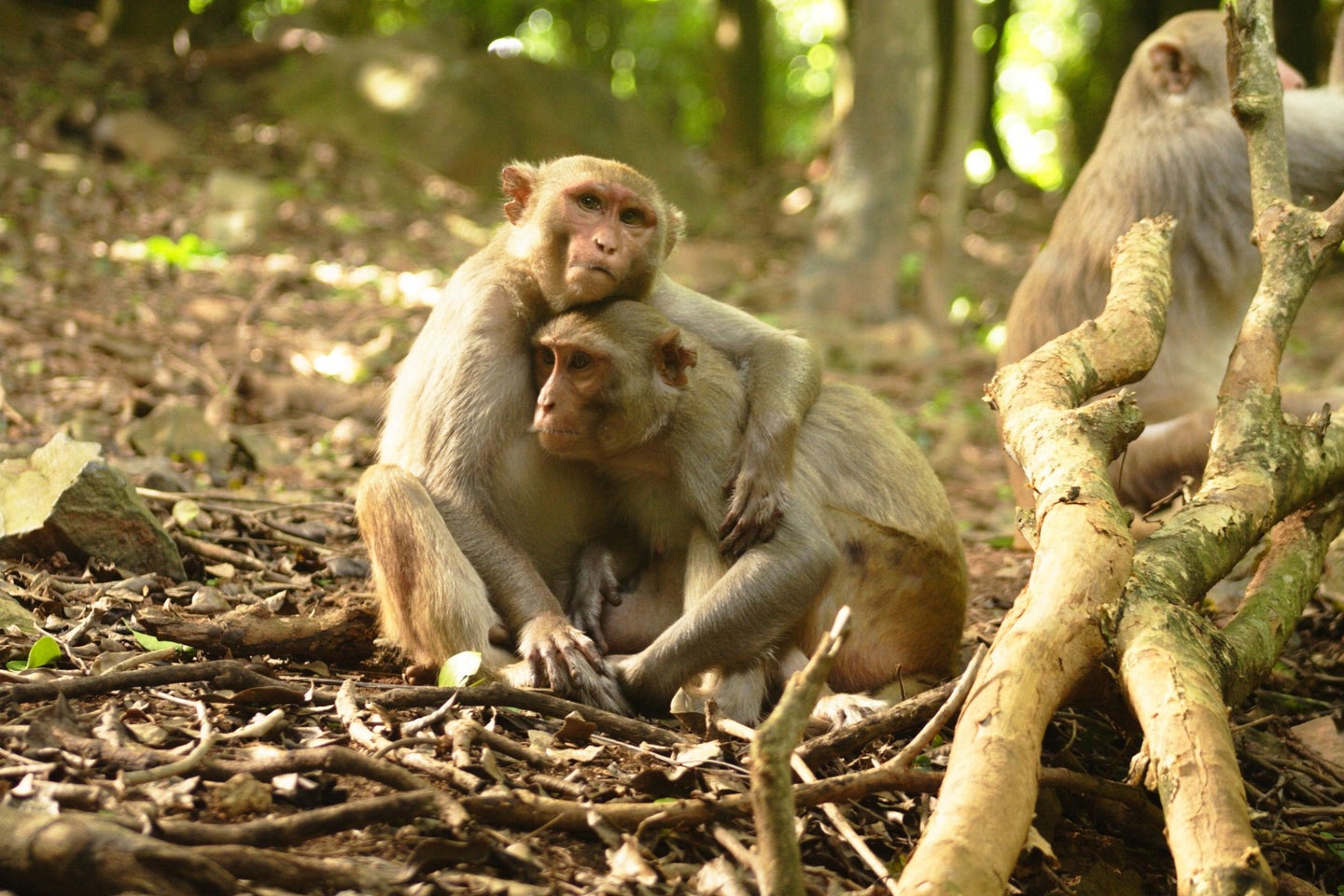 As the legendary Barbara Streisand once sang, “people who need people are the luckiest people in the world.” It turns out that the monkeys may also need monkeys, and that those social connections can affect even the tiniest parts of the body.

Friends and loved ones can potentially boost good bacteria in the gut microbiomes in one of our primate relatives, rhesus macaques (Macaca mulatta), according to a new study published late last week in the journal Frontiers in Microbiology.

[Related: Scientists want to know how our tiny gut organisms change when we bring them along to space.]

The gut microbiome is like a bustling city within the stomach, only instead of people and bicycles and pets running around, its trillions of microorganisms like bacteria, viruses, parasites, and more all living and working together.

The monkeys in the study all live on the island of Cayo Santiago off of Puerto Rico’s eastern coast. Originally, macaques were only found in northern Africa and Asia, but a population of 409 rhesus macaques were moved from India to the island in 1938. There are currently more than 1,000 monkeys on the small 34 acre island, where they move around and forage for food freely, but their diet is supplemented daily with some monkey chow. The monkeys are divided into several social groups and researchers annually conduct behavioral observations on the animals.

For this study, a team focused on a single social group of of rhesus macaques containing 22 males and 16 females that ranged between the ages of six and 20 years-old. They collected 50 uncontaminated stool samples from this group between 2012 and 2013. To measure the social connections within the crew, they recorded the time each monkey spent being groomed or grooming in the same time frame and his or her number of grooming partners.

“Macaques are highly social animals and grooming is their main way of making and maintaining relationships, so grooming provides a good indicator of social interactions,” co-author Karli Watson from the Institute of Cognitive Science at the University of Colorado Boulder explained in a statement.

The team analyzed DNA from the poop to measure the composition and diversity of the gut microbial community and compared it with the social connectivity of the monkeys, taking into account the age, sex, season, and rank within the group’s hierarchy.

“Engagement in social interactions was positively related to the abundance of certain gut microbes with beneficial immunological functions, and negatively related to the abundance of potentially pathogenic members of the microbiota,” co-author Philip Burnet, a professor from the Department of Psychiatry at the University of Oxford, said in a statement.

[Related: They don’t make baby poop like they did in 1926, that’s for sure. Here’s why scientists care.]

“It is particularly striking that we find a strong positive relationship between the abundance of the gut microbe Faecalibacterium and how sociable the animals are. Faecalibacterium is well known for its potent anti-inflammatory properties and is associated with good health,” Johnson added.

While there is a relationship between the social connections in the monkeys and the make up of their gut microbiome, it’s much more difficult to point to a cause and effect.

“The relationship between social behavior and microbial abundances may be the direct result of social transmission of microbes, for example through grooming. It could also be an indirect effect, as monkeys with fewer friends may be more stressed, which then affects the abundance of these microbes. As well as behavior influencing the microbiome, we also know it is a reciprocal relationship, whereby the microbiome can in turn affect the brain and behavior,” said Johnson.

Even if more friends does not always mean a better gut, studies like these are important for understanding how the role that relationships and the outside world has the body, even down to tiny microbes.

“As our society is increasingly substituting online interactions for real-life ones,” Robin Dunbar, a professor from the Department of Experimental Psychology at the University of Oxford said in a statement, “these important research findings underline the fact that as primates, we evolved not only in a social world but a microbial one as well.”