The human microbiome has been linked to digestion, depression, and more. How might space travel change it? 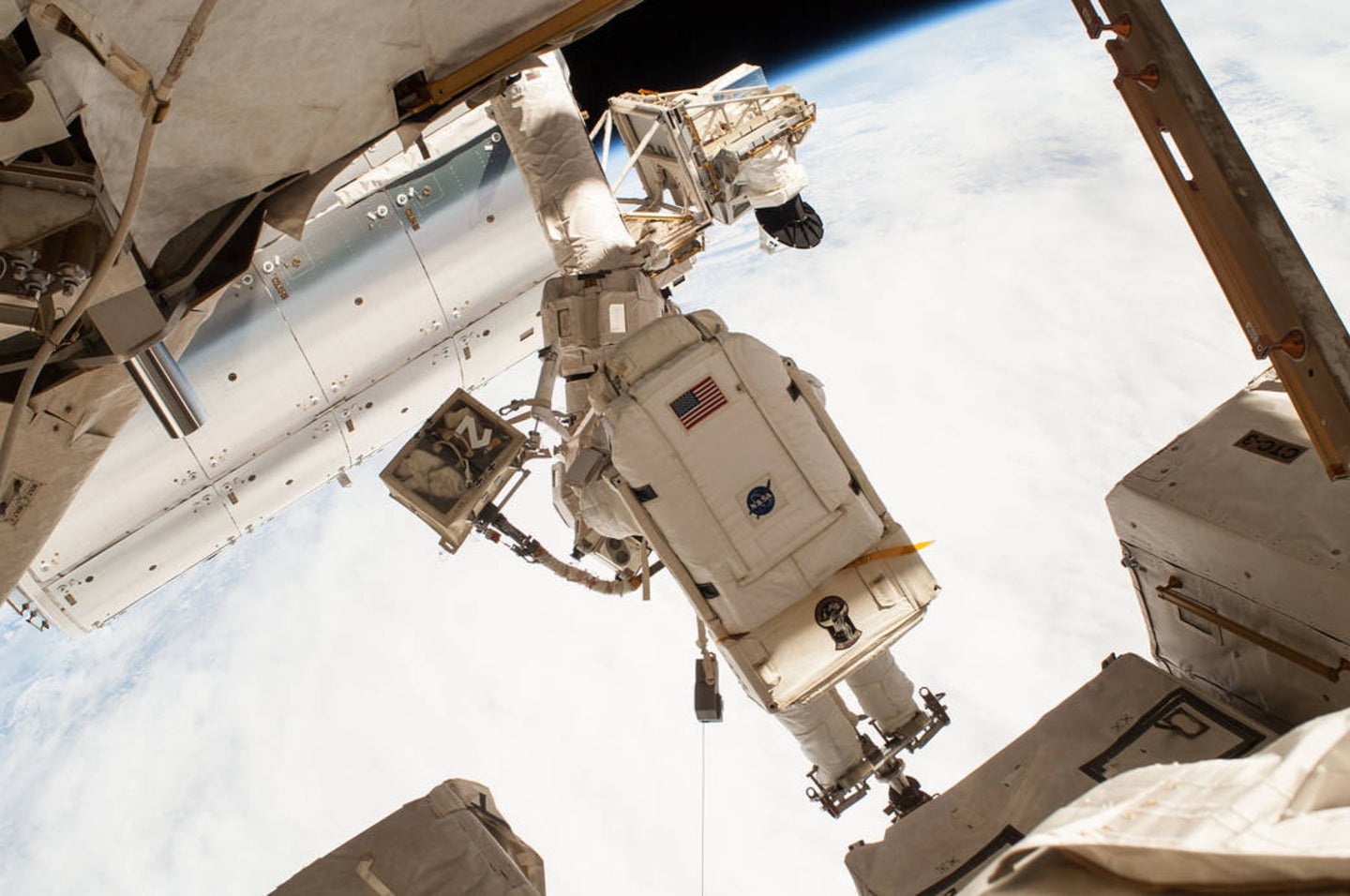 NASA astronaut Terry Virts on a spacewalk as the Earth's surface passes by in the background on February 25, 2015. NASA
SHARE

Space poses some massive dangers for humans, from black holes to the heat death of the universe. But as humanity considers long-haul space travel, there are other, smaller potential hazards that some researchers say may deserve more attention: microbes from Earth.

Astronauts face numerous known health problems in space, including a loss in bone density, muscle atrophy, and psychological issues. And on Earth, researchers are increasingly discovering how the various bacteria and other microorganisms that live inside and outside of people — the human microbiome — affects physical and mental health.

Space, of course, is an entirely different environment from Earth, with high radiation levels and microgravity. Although the science is far from certain, these vast differences may cause unexpected changes in the microbiome of astronauts. In turn, this could result in a range of health problems, which may be more pronounced on long-haul stints in space, like traveling to another planet.

Still, the implications of a disrupted microbiome are poorly understood, even on Earth, said David Pearce, a bioscience researcher at Northumbria University and author of a 2022 paper exploring how a trip to Mars might affect microbes in the gut — which makes the range of related illnesses and diseases in space difficult to predict. And direct research is limited because only around 600 people have ever been to space. Those who have taken the trip don’t typically stay long, as the average length of a trip to the International Space Station is about six months. And some researchers aren’t yet convinced there’s enough evidence suggesting the human microbiome will change much in space at all.

All the same, many researchers, including Pearce, are trying to figure out whether or not astronauts will enter a state in which their microbiome changes in adverse ways, called dysbiosis. “Because they’re going to be away for a long time, will that dysbiosis become a significant problem,” he said, “or lead to them having health impacts that impair their ability to function?”

Researchers try to understand the possible effects of space on the microbiome in two places: terrestrial settings that are similar in some way to those experienced in space, or in space itself. In an example of the former, Norberto González-Juarbe, a principal investigator with the astronaut microbiome research group at J. Craig Venter Institute’s Infectious Diseases and Genomic Medicine Group, is looking at the microbiomes of researchers who work in the Concordia and Neumayer stations in Antarctica. He said that these locations mimic, in part, what astronauts experience in space, particularly the darkness, confinement, and limited human contact.

The team plans to analyze samples from the researchers at these stations to see how the microbial composition of their gastrointestinal tracts change, and how their immune systems react to the space station-like conditions. According to González-Juarbe, early results show shifts in gut microbes, and the team is currently looking at the immunological data. He expects to publish the results by the end of this year.

As for studies conducted in space, there are a few. One 2019 study, for instance, compared the microbiomes of astronaut Scott Kelly and his twin brother, Mark, after the former went to the ISS for nearly a year starting in 2015. The study posited that Scott Kelly’s microbiome did indeed change in space. For him, this included a reduction in bacteria called Bacteroidetes, the dysregulation of which has been linked to neurological, immune system, and metabolic issues, as well as increase in Firmicutes, a type of bacteria that can help break down certain starches and fibers.

Back on Earth, the study authors extracted and sequenced the DNA from the samples to see how the astronauts’ microbiomes changed over time. The study found that various skin microbes, including types of Gammaproteobacteria, decreased in number, which the authors theorize could contribute to the common phenomenon of rashes and skin hypersensitivity among astronauts in space. The findings also suggested that the astronaut’s gastrointestinal microbiome changed, and that two types of bacteria — Akkermansia and Ruminococcus, which seem to play important roles in maintaining mucus integrity in the digestive tract and in breaking down carbohydrates — saw a five-fold decrease.

Gut microbiome changes can impact the metabolism of food, bone health, and even cognition, said González-Juarbe, who was not part of the 2019 study. Longer stints in space — like the 18 months to Mars and back — would likely compound these issues. “The saying, ‘You are what you eat,’ is kind of true,” he said. “Changes in the overall microbiome will have effects on your overall brain health, and your cognitive health.”

Not everyone is convinced that the human microbiome changes in space, however. Existing studies have too few subjects to draw any conclusions, according to Jack Gilbert, a professor of pediatrics at the University of California San Diego and biology section head for the Scripps Institution of Oceanography. “With so few people up there,” he added, “doing any studies with any statistical rigor is so hard.”

Gilbert is also skeptical of the Kelly twin study: “We have lots of twin studies we compared over time on Earth, and they all show significant deviations from each other.”

Potentially more concerning for human health in space are microbes that could escape the body and become more dangerous, Gilbert said. A 2019 study by Gilbert and his colleagues suggests this might be the case. In March 2016, astronauts in the ISS collected samples from the station’s dining room table. Six days later, the samples were brought back to Earth. Gilbert and his team then isolated the microbes in the sample, selected two strains of the fungus Fusarium oxysporum, and sequenced their genes.

The team then compared the isolated fungi samples to 62 other strains and found that the genetics from the ISS samples differed from those of their terrestrial counterparts. The team also subjected small worms called nematodes to both samples. They found that some of the microbes that had come from the ISS killed more of these worms.

Gilbert said that it’s possible fungus becomes more pathogenic in response to the harshness of space, although his team is working on a new study to help clarify that connection. Microbes prefer warm, moist areas, like the environment inside the human body. So, microbes that escape from that habitat onto the cold, dry surfaces — also subject to radiation and a lack of gravity — can pick up new survival skills over generations, he said. “Unfortunately,” he added, “some of those survival strategies are associated with things like antibiotic resistance or enhanced virulence against humans.”

Gilbert noted that astronauts chosen to go to space are often incredibly healthy, so the chances of them getting sick from one of these rogue microbes is small. However, if someone on a long trip to Mars has a weakened immune system from food poisoning or exhaustion, he added, they could be infected by “these hardcore, Mad Max survivors.”

The existing research on the human microbiome in space leaves plenty of unknowns, according to all of the researchers who spoke to Undark. For instance, Nicole Buckley, team leader with the European Space Agency’s SciSpacE — or science of space environment — program noted that it’s difficult to say if any ailments in space, like loss of sleep, are caused by microbial disruptions, or if the microbes are just contributing or reacting to other ailments.

Also unclear, so far, is how researchers can restabilize a person’s microbiome in space, should it be thrown out of whack to the point of illness, Pearce said. For example, fecal transplant — which involves transplanting beneficial bacteria from the stool of a healthy donor into someone who is ill — can help restore immune functions for people with certain diseases. But because microbiomes are so complex, “it’s not like administering a drug that has an outcome,” he said. “You’re administering an organism that may become established and have a desirable outcome, or it may not become established and not have the outcome you’re hoping for.”

Some of the researchers noted, however, that fairly simple changes could make a difference for astronauts. González-Juarbe said that providing fresh fruits and vegetables and high-fiber foods can foster microbes that produce short-chain fatty acids in the stomach, which helps support the immune system. Buckley noted that pre- and probiotic foods could also help in this area.

Astronauts in space do have access to freeze-dried foods, according to an email from Grace Douglas from NASA’s Advanced Food Technology Project, which have “normal levels of food-relevant microorganisms,” but are processed to avoid containing any pathogens. Astronauts also receive small amounts of fresh fruits and vegetables via resupply missions. Still, according to Buckley, a healthy microbiome requires limiting processed foods and even more fresh fruits and vegetables and high-fiber foods.

The ESA is currently working on a study in which they provide compounds found in human breast milk called oligosaccharides, a linked group of carbohydrates, to the diets of researchers staying at the Concordia research station in the Antarctic for more than a year. These compounds are believed to be important in creating healthy microbiomes in babies. The study will test the oligosaccharides’ impact on the researchers’ microbiomes, immune systems, and mood.

There are still other fields that need to be explored that could further science’s understanding of space’s effect on the human microbiome. For instance, there’s a need for more information about individual astronauts and their microbial equilibriums, what causes their microbiomes to become stable or unstable, Pearce said.

Pearce added that astronauts may encounter familiar opportunistic pathogens — microbes that are usually benign, but can become dangerous when a person’s immune system weakens, among other factors — like those responsible for MRSA, which is found in 2 percent of people. But there could be “unknown unknowns” in this area, he said: microbes that humans will carry into space that have the undiscovered potential to become pathogenic.

Right now, there’s also no telling how the human microbiome would change on a long trip to Mars, compared to a relatively short stay on the ISS, Pearce said. But considering the timescale of spaceflight to the red planet — which NASA plans for the late 2030s or early 2040s — scientists have plenty of time to better understand the role the microbiome may play for astronauts’ health, he added. Until then, Pearce said that researchers should continue using the means available to them, whether they’re terrestrial studies that mimic space, studies in space itself, or simply tests that aim to better understand the microbiome of humans that are safely on the ground. “There’s no one way we’re going to get an answer for this,” he said.