The real reason we’re seeing more wildlife during the pandemic

Some animals may be changing their routines and territories, but we might just be noticing them more. 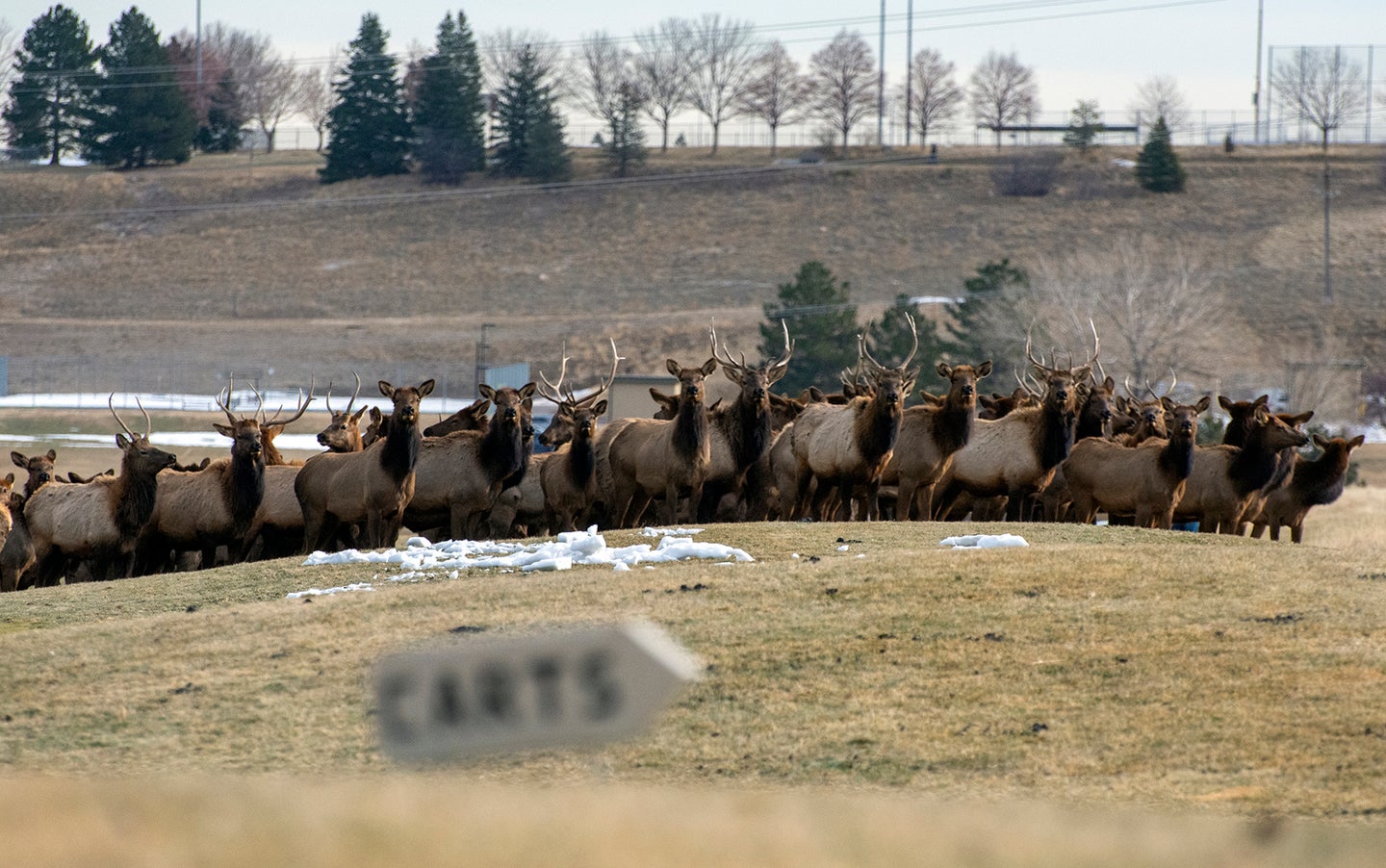 Elk gathering on a golf course in Colorado. Colorado Parks and Wildlife
SHARE

As the world has slowed down to stave off the spread of COVID-19, stories of wild animals tromping into now-quiet city streets have gone viral online. Some of these turned out to be completely made-up, including the dolphins supposedly swimming through Venice canals or the elephants getting drunk on corn wine in a Chinese farming village.

But there are also plenty of very real sightings of animals you might not expect in the urban jungle. Coyotes have been spotted throughout San Francisco, even taking naps in patches of green spaces in the city. In the coastal Welsh town of Llandudno, a herd of mountain goats stomped through the streets, munching on vegetation and climbing walls. In Boulder, Colorado, mountain lions have been prowling residential streets—one even took a nap in a backyard tree.

But it’s hard to know to what extent the sightings are the result of animals expanding their territories versus us paying more attention.

Joanna Lambert, a wildlife biologist at the University of Colorado-Boulder, has been seeing more wildlife lately in Lyons, Colorado, where she lives. She watched a mountain lion pad through her townhome complex and spotted a gray fox—an uncommon species to find in nature, let alone in the streets—on a daytime walk with her dogs. “They are paying attention, and certainly things have quieted down,” she says of wild mammals living near cities. “One of the hallmarks of species that live near or within human settlements is that they are very behaviorally flexible and responsive to these kinds of changes.”

Many species living on the outskirts of cities have learned to adjust to life near humans. That means they’re smart, opportunistic, and quick to adapt. Most of the time, they steer clear of people. They route their paths around us, hunting and foraging at dawn and dusk when the fewest number of humans are around. “[They’re] very sensitive to the presence of other species around,” says Lambert. “Humans are often treated by animal species as a predator … they will be very sensitive in terms of the time of day that they’re coming out and they will be most active when humans are least active.” Carnivores like coyotes, bobcats, and mountain lions all display this kind of reactive behavior.

Many creatures won’t even bother trying to cross a busy roadway. In a recent study, Fraser Shilling, co-director of the Road Ecology Center at University of California, Davis, identified that only about half of species living near major roadways in California tried to cross them. The rest turned away due to the bright lights and roaring engine noises.

As cities quiet down and empty out, many animals may quickly take note. Lambert says she wouldn’t expect the changes to be dramatic. Wild animals still rely on open spaces for food and shelter, and thus we won’t be seeing coyotes moving their dens downtown any time soon. But it’s possible they might be venturing farther or switching up their schedules. “The medium-size predators are opportunistic by nature,” says Shilling. “They are responding in real time to the disturbance. They have territories and the edges are flexible based on what’s making them go away.” As an example, he says that bobcats are averse to headlights, and dimming roads might encourage the cats to stretch their territory.

In those cases, additional sightings might be due to simple behavior changes. But a less charismatic creature may be also on the rise due to an increased human presence at home. Niamh Quinn, a human-wildlife interactions advisor with the University of California, thinks that rat populations may be increasing in New Orleans and elsewhere. That’s because people are cooking, storing, and disposing of at home, drawing rats away from closed restaurants and toward residences.

However, in the case of the larger animals, some officials think the change is mainly due to our own perception. Now, with many at home and bored, we’re perhaps increasingly staring out the window and going on walks in our neighborhood. A press release by the Colorado Parks and Wildlife department says that the increased sightings are more likely just due to being at home. “With more people at home looking or being outside, wildlife sightings could go up,” reads the statement. “This won’t be a new phenomenon, the animals have always been there, but they may have previously gone undetected.”

Quinn agrees. Late last year, she radio-collared five coyotes in Los Angeles for a research project. She says that her coyotes haven’t changed their routines since the shelter-in-place order went into effect, staying in their respective territories, which include areas near a shopping mall and golf course. Quinn adds that while the number of coyotes reported in San Francisco on the Coyote Cacher website isn’t unusual, they could be moving about during the day more. “People are just at home noticing more things,” she says. “Especially in California, we’re not all spending five hours a day on the freeway [now], you know?”

Lambert thinks the trend is part us observing more, part changes to animal behavior. “Certainly, animals are out and about more than they might otherwise be, and this is especially true with mammals,” she says. But she adds that people are also slowing down and paying more attention now.

Shilling adds that he’s talked to bird enthusiasts who claim they’re hearing more avian calls these days. He thinks that while perhaps more birds are indeed stopping in towns as they become more peaceful, we might just be hearing birds more clearly, now that the persistent hum of engines and industry has gone down.

Shilling also says that we might have some complicated impacts when it comes to animals and roads. In general, his research shows that the noisier a road, the fewer animals try to cross. Now, with less traffic and headlights, more animals may be attempting to cross roads. “That’s a mixed blessing,” he says. If a once-busy highway now has half the traffic, that might still mean a coyote or cougar only has a couple seconds to get across. The sudden drop in noise could encourage more animals to attempt the trip, but they might still only have a 50-50 chance of avoiding a collision. So, roadkill might actually increase in some areas.

But on less-used state and rural highways, the lower traffic might allow wildlife to effectively expand habitat previously bound by busy streets. Shilling and his team track collision data and will eventually have information on how this lull in human activity might be affecting animal movement and safety.

If you do spot creatures trekking into your neighborhood, Quinn says it’s important to give them space. After all, she says, we’re at home now because of a zoonotic disease. “It’s very important to keep wildlife wild,” she says. “You should never feed wildlife.”

Lambert hopes that this situation might lead us to appreciate our wild neighbors. Now is a great time to go birding, she notes, with many avian species migrating and engaging in courtship rituals and songs. “These animals have always been here and they are sort of revealing themselves to us now at a time when we’re paying attention to the small things,” she says. “I hope that that influences our disposition to the life around us.”