Sustainable lithium extraction is necessary for a renewable-energy and EV friendly future, but mining has traditionally been tricky. 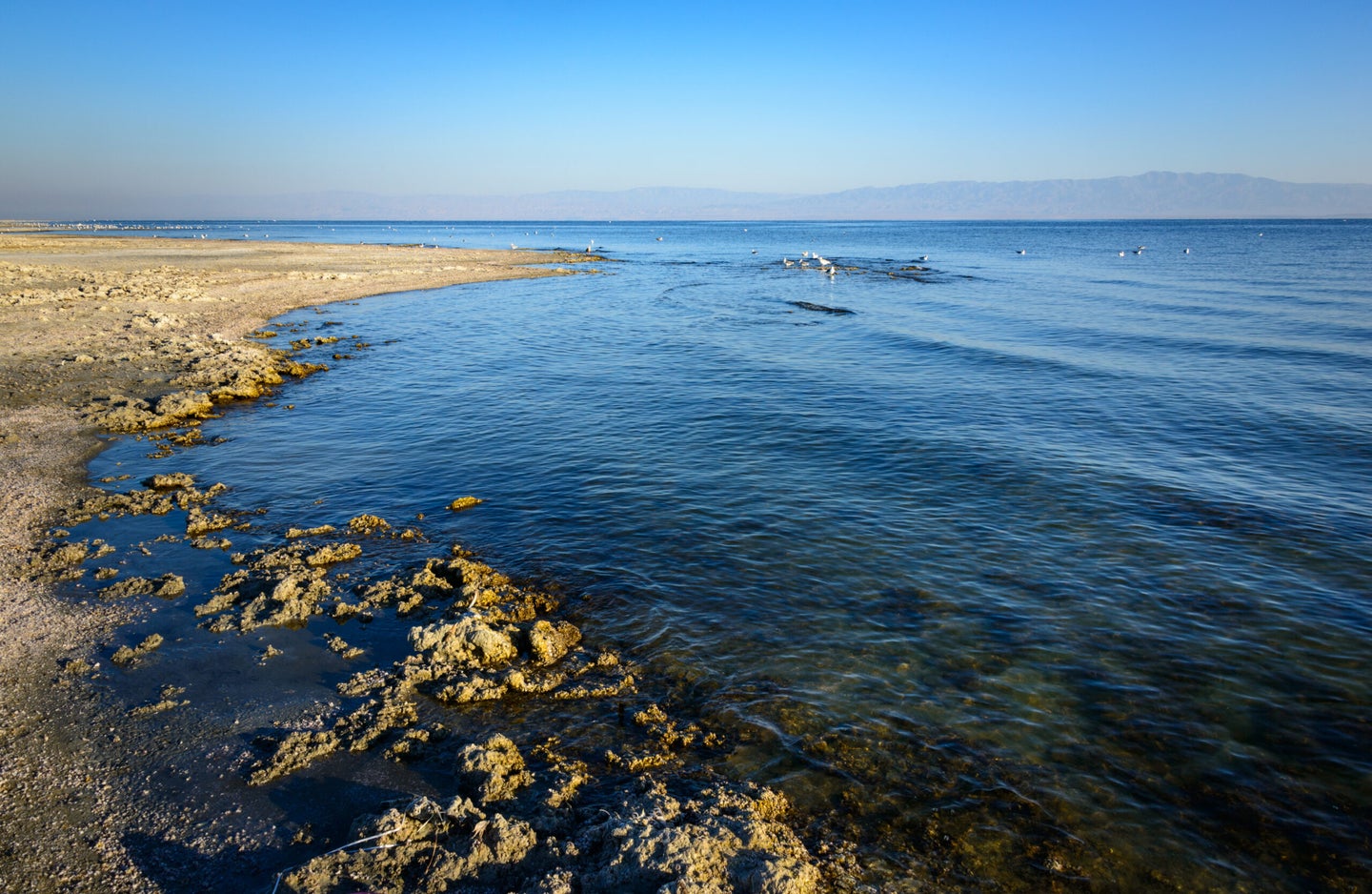 The super-polluted mega lake in Southern California could be the next hotspot for one of electric vehicle production's most crucial materials. Deposit Photos
SHARE

The world and world leaders are working on turning away from gas powered mode of transportation and especially investing in electric vehicles (EV) as a solution to lower emissions. To keep up with the growing demand for electric vehicles, more lithium mining will be needed. Lithium is a metal used to make rechargeable electric vehicle batteries—but the extraction process is often tied to hurting underrepresented communities.

A lot of the world’s lithium currently comes from evaporation ponds in South South America and hard-rock mines in Australia, according to the Los Angeles Times. The extraction of the rare mineral is often met with fierce opposition from conservationists and Tribal Nations because it has often encroached on sacred indigenous land, especially in the American West. One drilling site in Southern California’s desert, near a notoriously polluted lake called the Salton Sea that spews toxic fumes and has a salinity level that kills off almost all of its wildlife, is taking a different approach to drilling for lithium.

Controlled Thermal Resources, a clean energy resource developer, began drilling its first lithium and geothermal power production well called “Hell’s Kitchen” by the Salton Sea earlier this November and is backed by millions of dollars from investors including General Motors. These projects offer multiple solutions to the problems in the Salton Sea and surrounding areas—suctioning out lithium from the heavy-metal polluted waters and boosting energy production can create jobs and revenue from a seemingly hopeless situation. The project’s first base load of 50 megawatts of renewable power is scheduled to be delivered in 2023, with 20,000 tonnes of lithium produced by 2024.

[Related: Why Dyson is going all-in on solid-state batteries.]

“If done correctly,” Frank Ruiz, Audubon California’s program director for the Salton Sea area told the LA Times, “it will elevate the region by creating jobs, benefit the state and the nation by making geothermal energy more affordable, and lay the groundwork for negotiations aimed at ensuring that some of the royalties from lithium production and related land leases are used to support dust reduction and environmental restoration projects.”

Demand for lithium is expected to triple by 2025, making drilling projects like Hell’s Kitchen  necessary. And lithium isn’t just necessary for electric vehicles—battery storage from solar and wind energy is going to need lithium to keep the lights on days when solar panels and wind turbines can’t keep up with demand. And as per the Biden Administration’s infrastructure plan, more and more of the country is being pushed to use electric vehicles for transportation. Midwestern states are even investing in EV-charging roads to support the use of electric vehicles which often use lithium batteries.

Rahul Harkawat, the founder of startup Quantum Copper which is investigating methods to reduce lithium battery fires, says that there are different issues that come from using lithium, for example extracting it from the ground and the other materials that are used to make lithium batteries.  He believes that sustainable extraction (like the project in California) along with better solutions for reusing lithium could make the industry cause less harm to the environment.

“It’s the chemistry of lithium ion batteries… certain [lithium battery] formulations use products like nickel… and the extraction of those metals in countries [often] have very poor governance and sustainability metrics,” Harkawat says.

Solutions for making lithium batteries more sustainable in their final form are reducing the risk long lasting lithium fires (that can cause toxic fumes and use up thousands of gallons of water) and figuring out a way to recycle materials, he says. Companies like Redwood Materials have already found a way to recover and recycle between 95-98 percent of tough-to-recycle materials, like lithium, copper, nickel, and cobalt, from out-of-use EV batteries, according to TechCrunch. This could stop lithium batteries from sitting in landfills for centuries.

“We can recycle and reuse lithium battery technology so it can become part of the circular economy,” Harkawat says.”So that is something that should also be reviewed in terms of its impact.”

Longer-lasting, recyclable batteries can take some of the pressure off of ecosystems and communities that are impacted by extraction of materials, he says. And in a future where car developers might be producing electric vehicles exclusively, that is definitely something to consider.