What every rider needs to know about their motorcycle carburetor

Understanding how each part works is the key to tuning. 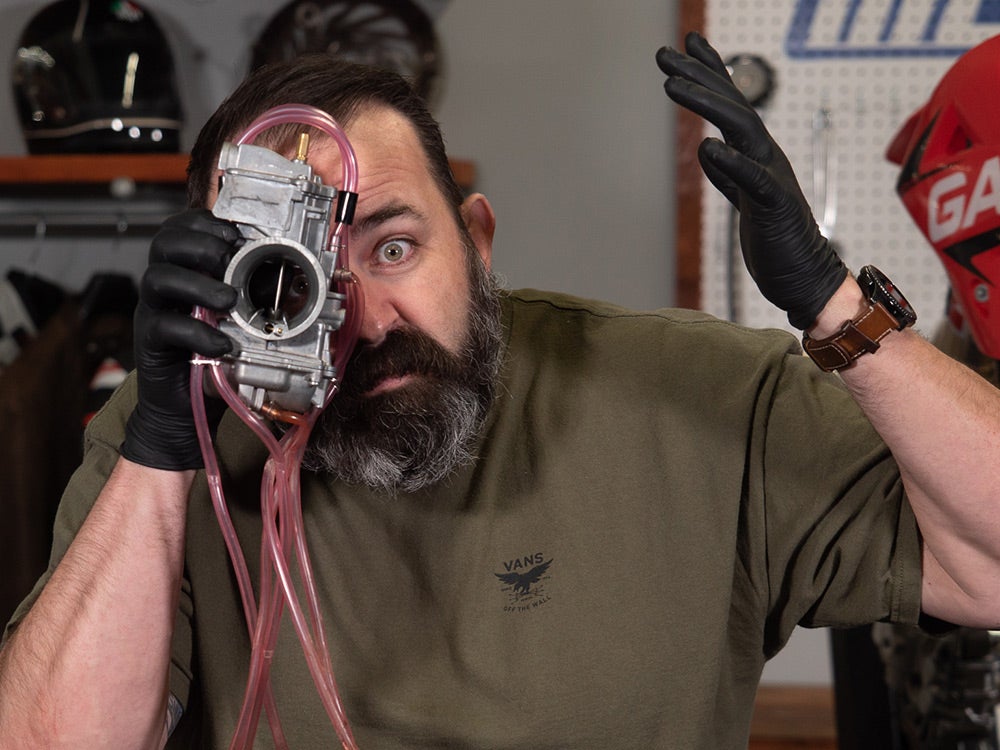 This article was originally published on Motorcyclist

Modern fuel injection is amazing, but before injectors, ECUs, and fuel pumps motorcycles used carburetors. Some smaller bikes and two-strokes still do. Today on MC Garage we talk about the carburetor.

For those of you who have an older motorcycle model or a modern two-stroke, one of the most confusing and intimidating tasks is probably jetting the carburetor correctly. To some, it amounts to black magic. But if you know the theory and reasons for each circuit in your Mikuni, Keihin, or Lectron and you take it step by step, it’s really not too difficult. Today we are going to start a multipart series on how to tune or “jet” a carb. Step one is to understand how it works and what all the parts do.

So how does the carb mix that fuel and air? In simplest terms the air comes through the venturi and mixes with fuel supplied by the carb in a specific ratio. This is called the stoichiometric ratio. That ratio is theoretically 14.7 parts air to one part fuel. In reality, your machine probably runs better at a richer ratio. Some tuners say 13.2, some say 13.7—each motorcycle has its own happy ratio for proper combustion. This mixture is achieved using small orifices or jets to mix the fuel with the air.

First and foremost, there is the place the fuel is pulled from: the float bowl. The float sets the level of the fuel from which the jets pull. The float operates the needle valve, letting fuel flow in when the level drops and closes when the correct level is reached.

When your engine is cold, a richer idle mixture is needed to make starting and running easier. This is the job of the choke. It adds more fuel into the mix to assist the idle circuit or pilot when the plunger is moved to open an additional path for that extra fuel. Once the engine is working, closing the circuit returns the carburetor to normal operation, relying only on the pilot for fuel.

The larger jet next to the pilot is the main jet. This is screwed into the needle jet, sometimes this is referred to as the nozzle. More on the needle jet later. The main jet provides the fuel at 80 percent to wide-open throttle. The fuel flows up and out through the needle jet into the throat of the carburetor. When changes in air density are significant the main jet will need to be swapped.

Handling the mixture between the pilot and main is the needle jet and needle. This is your midrange, or about 20 percent to 80 percent throttle. Within the needle jet the needle moves up and down to vary the orifice size to meter the fuel. The tapered shape of the needle controls the amount of fuel coming up through the main jet and through the needle jet. As it goes up, the opening gets larger, letting more fuel into the mix. You can tune this function by moving the static position of the needle up or down or by changing the taper of the needle.

The needle sits in the slide that moves up and down with throttle position. That can be controlled by a cable the flat-slide we are using for this video or by airflow passing around the throttle butterfly on a CV, or constant velocity carb. In CV, a vacuum is created that sucks the slide up as airflow increases.

Those are the most important pieces of a carb and what they do. On the next episode we cover the tuning the idle circuit.