You Built What?!: A Street-Legal Three-Wheeler That Runs on Nearly 2,000 Batteries 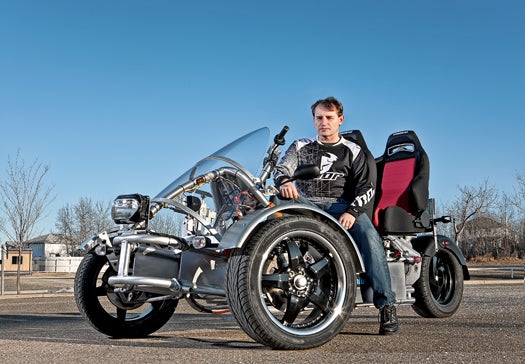 Nap Pepin had been waiting on the side of the highway near his Alberta, Canada, home for more than hour when the tow truck finally pulled up. The driver looked at the stranded electronics technologist and his homebuilt electric trike and asked, “Ran out of juice, eh?” Pepin wasn’t sure what the problem was, but he knew he still had plenty of charge. He had been tinkering with battery-powered three-wheelers since 2005, and by that point, late last year, he had spent hundreds of hours designing a battery pack to ensure that his vehicle, the Lithium Hawk, would never unexpectedly lose power.

Pepin, 48, has been making vehicles since he was a kid. After building an electric trike using some parts from a kit in 2010, he decided to make his own three-wheeler from scratch. He designed an aluminum chassis, chose an AC motor that could handle the trike’s 1,000-pound estimated weight without overheating, and selected a pair of car wheels for the front. He wanted the trike to be rear-wheel-drive, so the back wheel was critical. Conveniently, he found several people who had converted Honda Goldwing motorcycles into standard gas-powered three-wheelers and no longer needed the shaft drive that powered the bike’s rear wheel. The shaft drive was ideal for his project, in part because it allowed him to outfit the trike with highly efficient tires. He bought one, originally priced at $3,500, for $106 on eBay.

Despite all the mechanical engineering involved, the batteries presented the biggest challenge. Typically, as lithium cells run down, their performance degrades. Pepin wanted his vehicle to be more like a gas-fueled car, which provides more-consistent acceleration. So he ordered several types of lithium batteries, bought testing equipment, and spent two months analyzing the batteries’ performance under a variety of conditions. 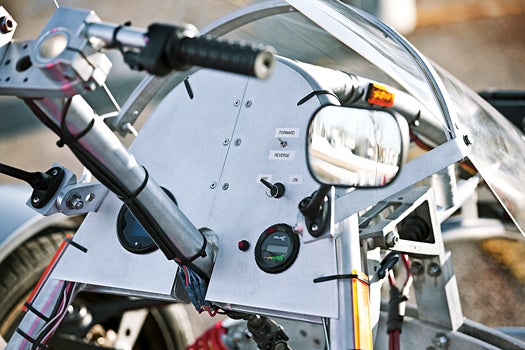 When he found a winner, he worked for another few months on a copper-plated pack to encase the 1,976 cells. He spent more than 100 hours precisely welding the copper around the batteries, only to find that the welds weren’t holding. That forced him to get rid of the copper and start over with strips of nickel, which he spot-welded together with the cells at 23,712 different points.

Pepin may build a real body for the Lithium Hawk to increase its range, but right now he thinks it looks cooler without one. The vehicle gets plenty of attention and is street-legal. Pepin discovered that a manufacturing flaw in the motor controller caused his highway breakdown, and he has now corrected it. He’s also designing a system that will regulate the power sent to the battery pack to maintain a constant temperature, so that the Lithium Hawk will perform as usual even in the subfreezing Canadian winter. 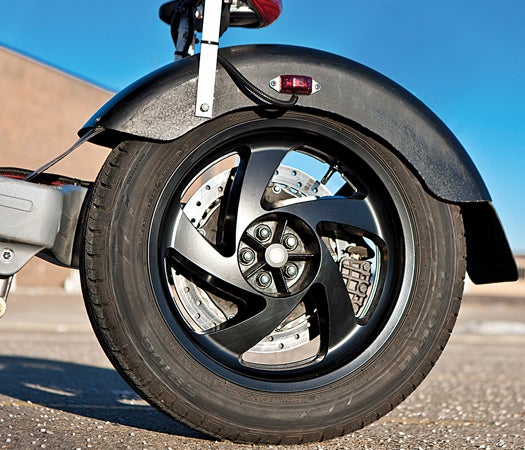 Steering: Pepin knew the Lithium Hawk would have to be registered as a motorcycle, so he opted for handlebars instead of a rack-and-pinion system; he was worried that the regulatory authorities might not approve a steering wheel. The handlebars he used initially were difficult to turn at low speeds, so he had to entirely rebuild the front of the chassis. (When he had the vehicle inspected, the regulators said they would have been fine with a steering wheel.)

Brakes: The vehicle has hydraulic brakes, but Pepin mainly relies on a regenerative braking system to stop. When he wants to accelerate, he twists the handlebar throttle toward himself, and to slow down, he turns it away. This sends a signal to the motor controller to slow the rear wheel. The Lithium Hawk’s motor behaves as a generator, and the controller captures the excess energy that’s produced and routes it to the cells, extending the vehicle’s range.

Performance: Pepin has driven more than 2,000 miles in the Lithium Hawk, and he says it out-accelerates practically every other vehicle on the road. He can jump from 45 mph to nearly 70 in about two seconds. At this point he won’t estimate the actual range of the vehicle, in part because it’s a skeleton. Had he decided to enclose the Hawk in an aerodynamic shell as he initially planned, the range would increase significantly at highway speeds.