Why so many racing machines rely on this ‘trouble metal’

Magnesium's light weight and ease of casting and machining make it attractive for a variety of applications. 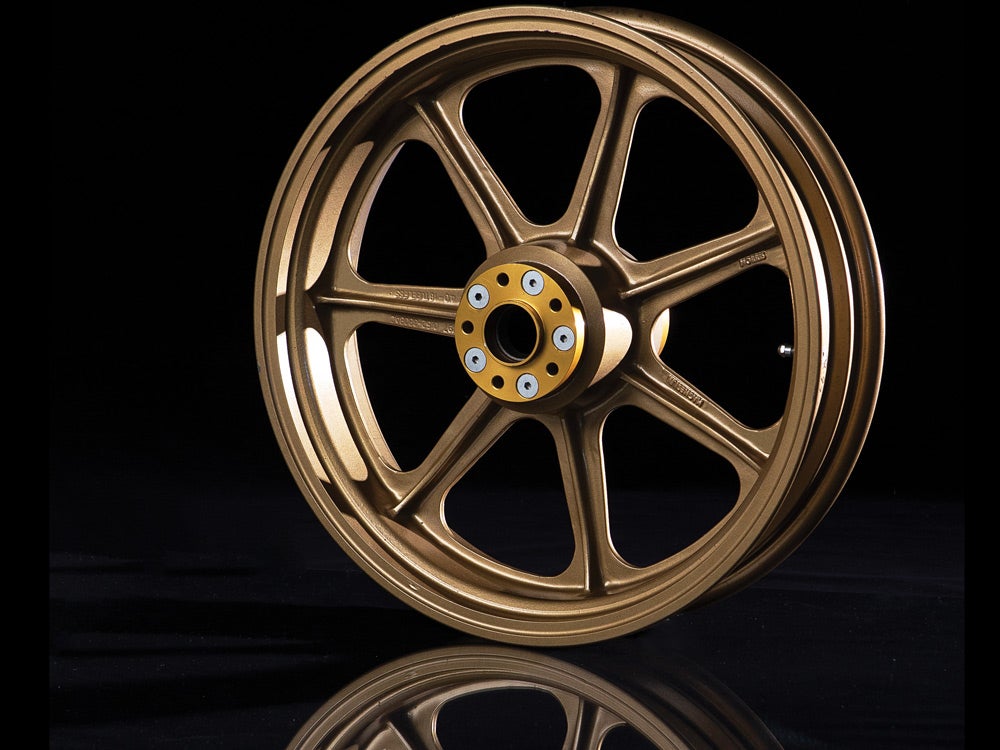 In times past, a walk along Daytona’s pit lane during practice was a feast for the eyes, and one of the major attractions was the lightweight magnesium parts on factory bikes. My own home-built Kawasaki H2-R 750 had only the prosaic gray cast-aluminum ignition and primary gear covers carried over from the 1970–’71 500cc Triple. But on the factory bikes, those parts were finished with the gold chromic-acid process sometimes called Dow 19. Lovely because: unavailable, exotic, wonderful. In 1976, when Yamaha brought its four-cylinder monoshock 0W-31 you-can’t-have-it version of the TZ750 to Daytona, its magnesium Powerjet carburetors were a strange, almost furry brown color—maybe the dichromate process. Other processes are used to provide a base for paint, as seen on the black clutch cover and clutch-release lever of production TZ750s.

These parts were not given these special finishes to make privateers feel bad. They were a necessity because magnesium, a highly reactive metal, is particularly vulnerable to corrosion. (I have an oil pump from an aircraft engine that is encased in what looks like chalk, but it is actually severely corroded mag.)

Magnesium is attractive for use on racing machines because of its low density of 1.8—this means that a given volume of this metal weighs only 1.8 times more than an equal volume of water. Iron and steel each have a density of 7.8 and aluminum has a density of 2.8, so the desirability of mag is understandable. We have all seen the auto industry’s shift to special plastics for things such as intake manifolds and radiator-header tanks. As with mag, the goal is weight saving—but plastics give immunity to corrosion.

Light weight usually brings a downside, and in this case it is magnesium’s low stiffness, given as its Young’s modulus: a measure of the ability of a material to withstand changes in length when under tension or compression. For steel, this modulus is roughly 30 million, but for magnesium it is only 1/5 as much. Contrast this with super-exotic beryllium, whose density is the same as magnesium’s but whose Young’s modulus is almost 44 million—stiffer than steel. Life is compromise—beryllium is expensive and inhaling Be chips or dust gives you berylliosis, or metal poisoning.

Worse yet is magnesium’s behavior under stress at even moderately elevated temperatures (above 200 degrees F)—its creep resistance. This is the one that causes many engineers to regard mag as “butter.” Velocette motorcycles’ racing engineer in the 1930s, Harold Willis, called it “trouble metal.” When magnesium-wheel pioneer Elliot Morris sought up-to-date info on mag alloys from a friend at Lockheed, he was told, “We don’t even mess with that awful metal anymore—today we have engines that can lift anything.”

Yet magnesium’s ability to adjust to applied stress recommended it to Bud Aksland, who worked with Kenny Roberts on many racing projects over decades. He said he preferred magnesium crankcases to aluminum.

When Honda put aside the unsuccessful oval-piston four-stroke V-4 NR500 and fielded its NS3 two-stroke Triple in its place, Freddie Spencer brought them a 500 world title in its second year. Its mag crankcases slowly deformed in service but could be restored to original dimension one time by a re-machining at 372 miles of service. That was the plan, but Spencer’s high-rev downshifts and lower-gear over-revving meant that his pounded-out crankcases were “same as scrap” at 372 miles.

This explains why, in general, magnesium appears on racing motorcycles today mainly as wheels, case covers, and as small, fiddly castings. Some have predicted that we might see more magnesium on bikes in the future because the auto industry—always seeking to cut weight as a means of hitting CAFE fuel-consumption numbers—has funded development of improved mag alloys for such things as seat frames.

When Elliot Morris first released his seven-spoke bike mags in 1973, he urged users to have the wheels annually stripped and crack-checked by dye penetrant. A dye is applied to surfaces. Wherever there is a crack, the dye enters it. When the wheel is then solvent cleaned and lightly coated with an absorbent white chalk, the cracks are revealed as colored lines of dye, soaking out into the chalk coating. Today, many racing mag wheels are forged, greatly improving the material’s fatigue strength. The forging of wheels has allowed safe use of more slender spokes, because many riders prefer the performance of “softer,” more flexible wheels—on both pavement and dirt.

Experiments have been conducted with magnesium pistons and air-cooled cylinders but without success. Volkswagen famously used magnesium-aluminum alloys for the crankcase of the Beetle’s flat-four engine.

A major consequence of magnesium’s reactivity is that chips or thin sections can be ignited readily in air to burn with an intense white light. As I machined brake-disc carriers from magnesium plate one June day in 1978, a dulled tool ignited chips on the lathe by friction, producing a blaze that came close to setting my shop on fire. If you must machine magnesium, use only very sharp cutting tools and do not allow chips to accumulate!

Years later I would tour the Marchesini mag-wheel plant at Brembo and see the elaborate precautions taken there in the handling of magnesium chips.

Anyone remember the photo flash bulbs of years ago? A plastic-coated glass bulb enclosed a tangle of magnesium “wool” in oxygen. Ignited electrically, this gave a brilliant pulse of light.

An all too common fate of engines on the World War II Boeing B-29 bomber was the induction fire—ignition of the compressed mixture in the intake system by backfiring. If this ignited the magnesium supercharger-diffuser casting, the crew of 11 had 30 to 60 seconds to jump before the intense fire, blowing back against the aluminum main-wing spar, caused the wing to fold. Historians have often claimed that B-29 engine crankcases were magnesium: This is incorrect—in fact they were forged steel.

If you are a student of transportation history, you might have seen mention of light alloys called “Elektron,” used in zeppelin frames and historic racing cars. These were typically 90 percent magnesium, 9 percent aluminum, and 1percent other.

As well as being light in weight, magnesium casts and machines nicely, making it attractive for a variety of applications.