Why Afghanistan’s Lithium Is a Big Deal, Even If It Never Leaves the Ground

Lithium is cheap and widely available, so why do we care about a new resource in a war zone? Because it’s another counter to the irrational fear that the automobile’s lithium-powered electric future is doomed before it begins 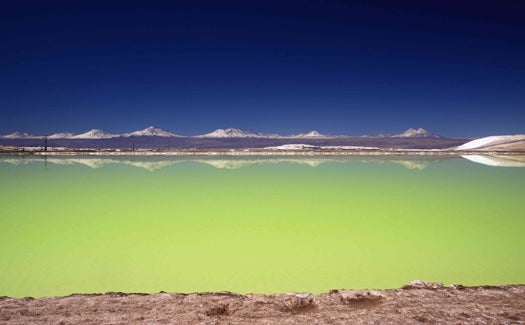 Immediately after the New York Times published a report last week of the Pentagon’s “discovery” of nearly $1 trillion worth of mineral reserves in Afghanistan, the backlash began. The U.S. Geological Survey released a report on the country’s mineral reserves in 2007, it turned out. Why was this coming up now? The bloggers pounced. By the end of the week, the accepted wisdom was that there was nothing new in this latest piece of government spin.

Drowned in the noise, however, was a fascinating bit of news: that just this month a Pentagon team was hunting for minerals in Afghanistan’s dry lakes, and that early findings suggested that one site alone might contain more lithium than Bolivia’s Salar de Uyuni, which is believed to hold up to half the world’s known supply.

Why is this significant? Because even if Afghanistan’s lithium never leaves the ground, the sudden, black-swan appearance of a new and potentially massive resource helps further debunk the myth that the world is running out of lithium and that, as a result, an electric-car revival that relies on lithium-based batteries is doomed before it begins.

Too much of the coverage of lithium seems to be driven by the idea that it is slightly more rare than unicorn hide. It’s not. Extremely conservative estimates from the USGS peg world lithium reserves at 9.9 million metric tons, and the number is almost certainly much higher. By contrast, in 2008 (because of the recession, 2009 was an unrepresentative year) the world’s lithium mines produced 25,400 metric tons. Those mines will need to produce more in the coming years as lithium-ion batteries start going into cars, but that shouldn’t be a problem: more than 100 companies worldwide are moving into the market.

If lithium isn’t rare, however, it is unfamiliar and misunderstood. It is an exotic, intriguing element—the lightest metal in the periodic table, and therefore the ideal carrier ion for a battery. It has been called “the yeast in the dough” of the most advanced batteries we have today, the power packs that will drive the Chevrolet Volt and the Nissan Leaf, both of which arrive later this year. Most of the blue-sky battery technologies in the lab now are designed to surpass lithium-ion batteries by jamming far more lithium atoms into their electrodes per unit volume and mass, thereby storing more usable electrons, so lithium will be an essential element in the construction of a clean-energy future. That’s a very good reason to pay close attention to the countries and the companies that produce it. But that doesn’t mean there’s not enough of the stuff to go around.

Here’s the backstory on the Afghanistan mineral findings. In 2007 the USGS published an estimate of Afghan mineral resources that showed that the country contained vast untouched deposits of iron, copper, rare-earth elements and other high-demand minerals. The report barely touched on lithium, simply mentioning that deposits of a rock known as pegmatite could yield “a variety of commodities,” including lithium.

Particularly in Australia companies do mine pegmatite for lithium, but digging and blasting that hard rock out of the ground and breaking it down into usable lithium is expensive, at least compared with lithium production from brines. In certain geologically anomalous spots around the world, there are large salt flats that are saturated with water rich in lithium and other minerals. Extracting lithium from the right kind of salt flat is a cheap and low-impact matter of pumping lithium-rich water from the flat into a series of evaporation ponds, where it bakes in the sun until it is concentrated into an oily yellow solution of 6 percent lithium. Currently, two of the three largest lithium producers in the world get their supply from a single salt flat in northern Chile, the Salar de Atacama. Across the border in Bolivia is the much larger Salar de Uyuni, which is loaded with lithium but which, for political and technical reasons, is still at least a few years from sending lithium to the market.

The penultimate paragraph of the Times story suggested that Afghanistan might have one dry salt lake richer than either of these. And that’s a major point that never appeared in a public USGS report.

Neither the Pentagon nor the USGS will elaborate on the mention in the Times story of a salt-lake lithium source. In an otherwise candid conversation, Jack Medlin of the USGS declined to provide any more details on the subject. Major Shawn Turner, a Pentagon spokesperson, said he had nothing to add. The location of Afghanistan’s lithium is yet to be officially confirmed, but many believe it lies in the dry lakebed of Dasht-i-Nawar (upper left), northwest of the city of Ghazni

According to Jack Shroder, a geologist at the University of Nebraska-Omaha’s Center for Afghanistan Studies, a high-altitude plain that’s about a 70-mile drive northwest of the city of Ghazni known as the Dasht-i-Nawar is the obvious candidate for the mysterious Afghan mother lode. Shroder said he didn’t know for certain that this was the spot, but “if the lithium source is in a dry lake and it is near Ghazni, then it is probably the place.” (An alternative, he said, is another dry lake farther to the south called Ab-i-Istada.)

The salt flats of the “Lithium Triangle”—the high desert region where Chile, Argentina and Bolivia intersect which is currently home to the most productive lithium sources in the world—and the Dasht-i-Nawar have several uncanny similarities. They are all arid to semi-arid high-altitude salt flats where flamingos like to breed; that’s the superficial part. They all sit in high-altitude contact zones between tectonic plates, zones where ancient volcanism left behind mineral-rich igneous rocks. Most important, all three are basins surrounded by old volcanoes. (Shroder says that the Dasht-i-Nawar is what remains of the crater of a stratovolcano that erupted 2.2 million years ago.) Over the millennia, as the ice and snow melts off the surrounding mountains and volcanoes every year and seeps down to the basin below, that water leaches minerals from the volcanic rock it encounters along the way and deposits them at the bottom of the basin. In time, the water in the center of the basin grows richer in minerals like potassium, magnesium, boron and lithium.

At the second annual Lithium Supply and Markets conference in January, Afghanistan didn’t come up once in two days of presentations by mining-company executives, geologists and industry analysts. At the next such conference, it will probably be mentioned frequently as a curiosity, because it’s unlikely that Afghan lithium will have any effect on the market for decades. Mining companies aren’t necessarily scared of sketchy countries—I’ve seen North Korea mentioned as a new frontier in minerals exploration in mining trade publications—but at the moment, lithium is cheap (the market leader, SQM, cut its lithium carbonate prices by 20 percent last year) and widely available (at the moment, SQM is actually pumping excess lithium back into the Salar de Atacama because the company harvests more lithium as a by-product of potassium production than it can find a market for). There’s no reason to go lithium prospecting in a war zone.

“As far as Afghanistan is concerned, who cares?” Jon Hykawy, a mining analyst with Byron Capital Markets in Toronto, wrote in an e-mail. “I am not going to be the one leading a team into Taliban territory to try and process lithium.” He drew an analogy between Afghanistan and Colombia. Colombia has potentially excellent oil reserves, just like neighboring Venezuela, but “there has been a low-grade civil war going on in Colombia for the last couple of decades. No one is crazy enough to try and get oil out of the ground in Colombia, and no one is going to go try and get lithium out of the ground in Afghanistan until the thugs are out of the government and the Taliban stop killing anything that moves that is not allied with them.”

Companies don’t like risk and lack of security, and Afghanistan, well—”it will be probably the worst place to go to,” says Gal Luft, the executive director of the energy-focused D.C. think tank the Institute for the Analysis of Global Security.” Security concerns aside, Luft points out that it took years for Chile to build the rail and road infrastructure that gets its huge copper mines running, and before Afghanistan can become a serious mining country, it will need the same infrastructure.

The most likely candidate to build that infrastructure is probably the country that seems most interested in securing Afghan mineral rights, despite the war: China. Last year, using a comprehensive package of humanitarian aid and (allegedly) bribes, a state-run mining company won the rights to the Aynak copper mine south of Kabul. Today the Chinese (the distinction between industry and the government is blurry) are fighting for rights to mine the Hajiguk Pass north of Kabul, home to 1.8 billion metric tons of iron ore—the largest iron deposit in Asia. Shroder says it’s likely that a Chinese firm could win the rights to Hajiguk, build the roads and railway necessary to ship iron ore south to the the Pakistani port of Gwadar (which Chinese concerns also built), and years from now use that existing, paid-for infrastructure to start extracting the lithium from a source like the Dasht-i-Nawar, which is about 100 miles to the south of Hajiguk.

Say this scenario actually happens. Would it have any practical effect on the price or availability of lithium? Not anytime soon. “I don’t think it has a lot of implication for the market in the first half of the 21st century,” Luft says. “This is a story for the 22nd century.”

What the story does now is help show that it is absurd to start talking about an impending shortage of a mineral that the mining industry really only started taking seriously after the spread of lithium-ion batteries in laptops and cell phones in the 1990s. When the Afghanistan news broke, a friend at a mining-industry publication confessed to never having heard of Afghanistan as a potential lithium source. But he also said he wasn’t surprised, because lithium is not rare. What other countries have high-altitude salt lakes that we’ve never paid attention to? As Luft says, “I wouldn’t be surprised if half a dozen other places get thrown around as the ‘Saudi Arabia of lithium'” in the years ahead.