The former concept i3 has been made real, and might be the most interesting electric vehicle we've seen in years. 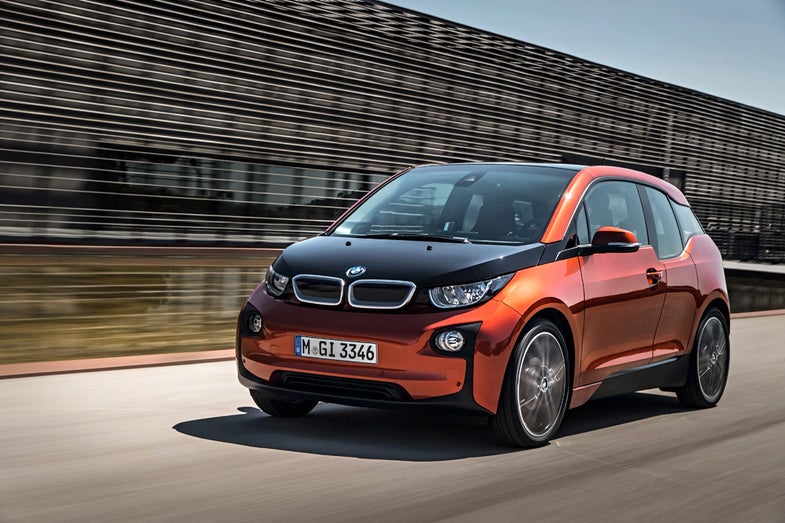 BMW isn’t entirely new to electric vehicles, or EVs; the company has been testing an electric Mini Cooper for awhile now, and we actually wrote about the i3 two years back, when it seemed like just a concept. But now the i3 is officially seeing a release, and it’s the first BMW that was designed from the ground up to be an electric car. The benefits are pretty obvious: it’s the lightest EV out there, with one of the quickest charging times and excellent performance. And it looks pretty weird, just like an electric vehicle should.

One of the things we really like about the i3 is that it looks different. Lots of EVs attempt to blend in, to be normal-looking cars that just happen to have a totally different engine system, but that’s going to lead to inefficiencies, because EVs have different needs, different strengths and weaknesses, than traditional gas, diesel, or hybrid cars.

The i3 is small, shaped like a hatchback, but it’s got four doors, unlike the classic Mini Cooper. The rear doors are suicide-style, with the hinge at the rear of the car rather than the middle. The motor is mounted in the back, like an old VW Beetle, and there’s no transmission column at all. Who needs one? That means the floor is completely flat, even right down the middle, where the transmission tunnel usually is. 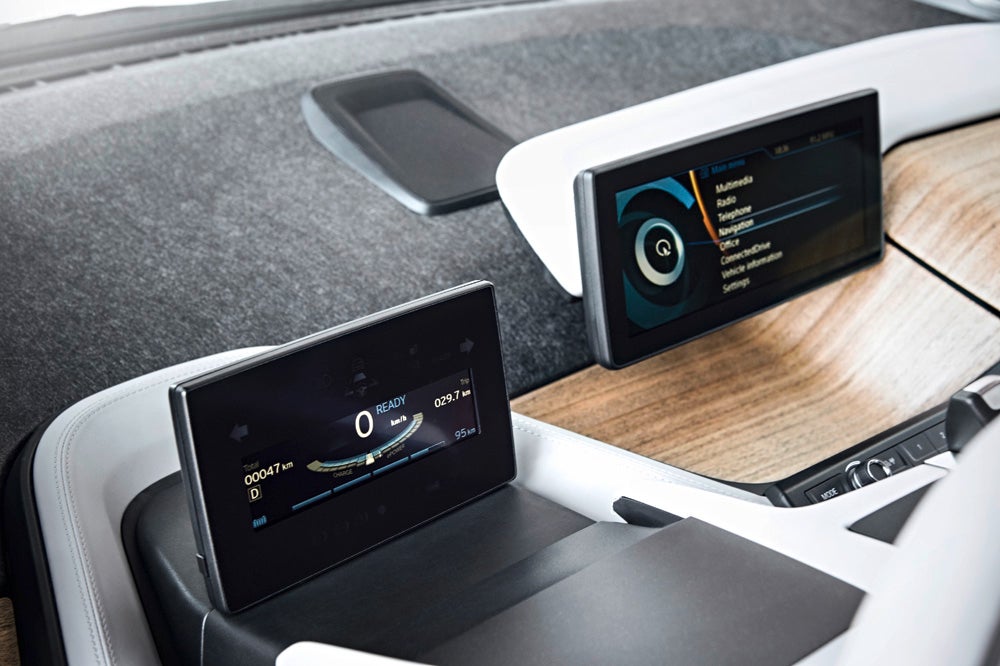 The BMW i3 Dashboard

BMW also took a big leap with the materials, constructing the main chassis from carbon-fiber-reinforced plastic. EVs are typically limited in power and have to lug along lots of batteries, which are super heavy, so it makes sense to lighten the load elsewhere. This reinforced plastic is, according to BMW, just as strong as steel or aluminum, but 50 percent lighter than the former and 30 percent lighter than the latter. The interior materials too are sustainable, with recycled plastic, sustainable woods, and trim from a plant we’d never heard of: the kenaf plant. (Kenaf is a plant in the hibiscus family that looks sort of like bamboo and is used to make super strong, super cheap woven material, sort of like burlap. But you can also process and then harden the pulp, which looks like hardwood and doesn’t require the chopping down of rare slow-growing hardwood trees.)

The dashboard is also hyper-modern and weird. Instead of a traditional mounted display for navigation and things like that, there’s a pair of what look like Nexus 7s (they aren’t actually Nexus 7s, as far as I can tell) propped up on the dash. The one in front of the driver shows your typical dials–RPM, speed, charge level–and the one in the center, which looks almost like it’s floating, gives access to navigation, music, and connection to your phone.

Under the hood, so to speak, it’s got a 170hp engine delivering 184 pound-feet of torque. The lithium-ion battery delivers 22 kWh, which BMW says will give you a range of about 80-100 miles per charge. For comparison, the Chevy Volt’s all-electric range is about 25-50 miles, though it supplements that with gas, and the Nissan Leaf has tested anywhere from about 60 to about 120 miles, though the average is probably closer to 60. The i3 will go from 0-60 in under 7 seconds, which is about average for an EV. More important is the charging time, which BMW says is only three hours over a 220-volt line, thanks to a charger that’s the largest of any EV on the road. Using a “fast charger” like the Combo, BMW says that time can be shortened to 30 minutes. 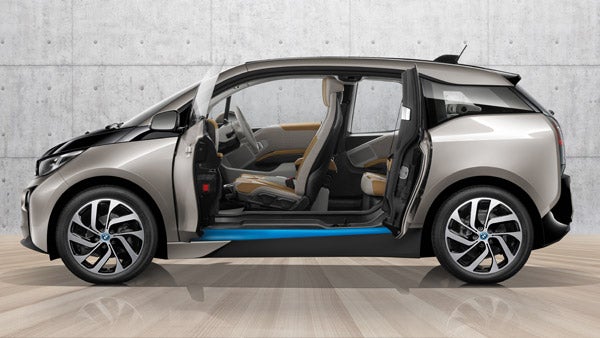 The BMW i3 Doors

The car weighs only 2,700 pounds, much lighter than the Leaf and the Volt, which both weigh around 3,500 pounds. You can add a small gas engine as well, which will double the range and add 34 hp, but will also bump the weight by over 300 pounds and add a few thousand dollars to the price.

The BMW i3 should be on sale here in the U.S. by early 2014, with a sticker price of $41,350 before any incentives (which include a $7,500 federal rebate). Pretty cheap, compared to other BMWs! You can read more about it on BMW’s extremely pretty (and heavy) site.