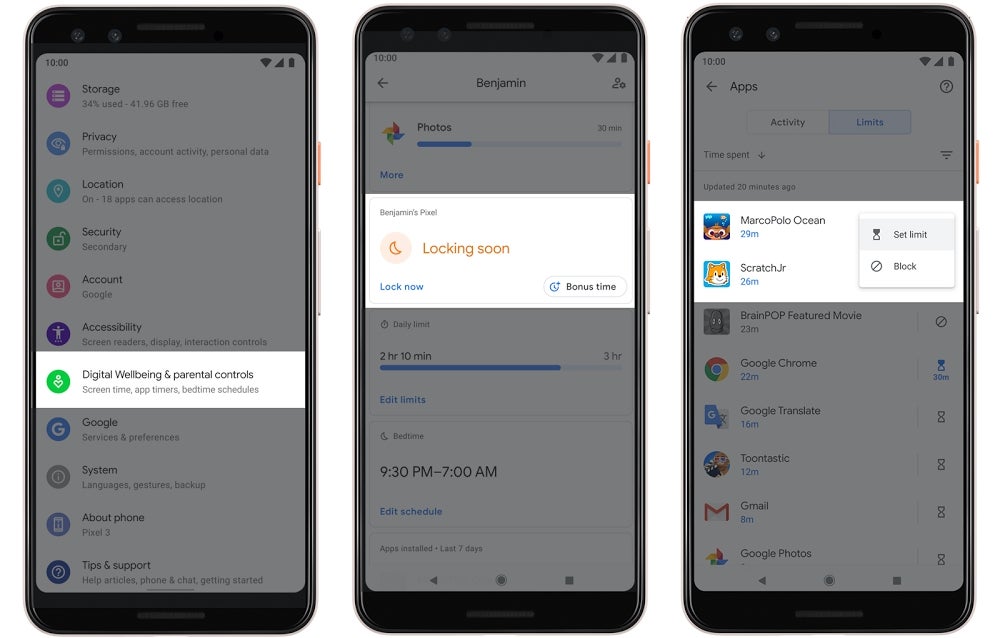 Google announced a host of features coming to the newest version of its Android operating system back in early May at its I/O developers’ conference, and now it’s officially available for download if you have one of the company’s Pixel phones. Curious to try it out? If you’re using a Pixel, go ahead and check Settings, then System, then Advanced, then System update.

Back in the more naive days of May, we knew this version as Android Q, but in August we received the paradigm-shifting news that Google would call it simply Android 10. Other generations of Android had names like “Nougat,” “Oreo,” and “Pie,” but those alphabetized dessert-themed days are gone now, like so many sweet Thanksgiving scraps tossed into the garbage.

Now that the latest and greatest version of Google’s mobile operating system is officially out—and more clearly named—here are some top-line features to look for.

Android 10 now boasts a dark mode, which Google calls Dark Theme. Besides giving your phone a brooding black-hued look, dark mode can stretch a phone’s battery life. That’s because on an OLED screen, the individual pixels can actually shut off. When dark mode is on and parts of the screen are pure black, that means that pixels are off, and the battery is doing less work.

And Google notes that you’ll be able to customize Dark Theme so it’s not either totally on or off: “You can enable Dark Theme for your entire phone or for specific apps like Photos and Calendar,” according this recent blog post from Google.

Navigating Google and Android privacy settings can be confusing. Android 10 is intended to make controlling information like your location easier. For example, in past versions of Android, when managing if an app has access to your location, there were two choices—a yes or no. Now, you should see a new choice: to share your location with an app only when you are actually using that app.

That last option is a great middle ground for people who want to take advantage of the ways that sharing your location with an app can be useful or essential (Uber needs to know where to pick you up, for example) but don’t want to always allow an app to know that information. iPhones already have a “While Using the App” option for location, and it’s great to now see Android offering the same.

Android 10 will also create a new “Privacy” option in the Settings app, which hopefully makes these choices easier to parse.

Do you ever find it’s hard to resist clicking on an app—Twitter or Facebook, perhaps—when you really should be using your phone for something else? You’ll be able to check off the apps you want silenced, so you won’t receive notifications from them, and you’ll also see a pop-up message letting you know that you paused that app if you indeed give into Instagram temptation and click on one of the temporarily forbidden applications.

Do you turn on the subtitles on Game of Thrones and other shows to help you understand what characters are mumbling about? Google offers a new captioning option that takes the words spoken in a video and displays them as captions in real time. This is a separate capability from what Netflix offers in their app, for example—it’s a way for you to see captions in a video you’ve taken on your phone, or that someone has sent you.

In fact, Google said in a blog item that the feature “works with videos, podcasts and audio messages, across any app—even stuff you record yourself.”

The feature could be helpful for a person who is hard of hearing or deaf. Google has moved the artificial intelligence network that powers captioning to the phone itself rather than the cloud, so that it doesn’t need to be connected to the internet to work. That AI takes the form of a neural network that occupies just 80 megabytes of space on your smartphone; the fact that this machine learning magic happens on the device is good from a privacy perspective.

While Android 10 is indeed out, Live Caption is coming to Pixel phones “this fall,” according to the September Android 10 blog post.

You’re probably hearing a lot about the promises of 5G, which is the faster, next-gen cellular network that’s slowly arriving. This next version of Android “supports 5G natively,” Stephanie Cuthbertson, director of product management for Android, noted back at the I/O event in May.

Remember, besides the software running on the phone, the smartphone itself also has to have the right internal equipment to be able to pick up a 5G signal where it exists. Right now, one of the most prominent 5G-enabled phones is the Samsung Galaxy S10 5G, but you shouldn’t rush to run out and buy a handset like this just yet.

Android 10 has also been designed to work well with phones that fold, like the Samsung Galaxy Fold. This new version of Android will support handsets that fold through features like “screen continuity”—in other words, if you’re using an app on the front screen of a folding phone, and then you open the device to the tablet-sized screen, that app will then port itself over to the bigger internal screen.

Curious to learn more? Check out the official Android 10 site, which is full of explainers and animations.

A version of this post first appeared after the Google I/O conference in May. It has been updated since we first published it.