Managing the climate crisis means diminishing our reliance on both. 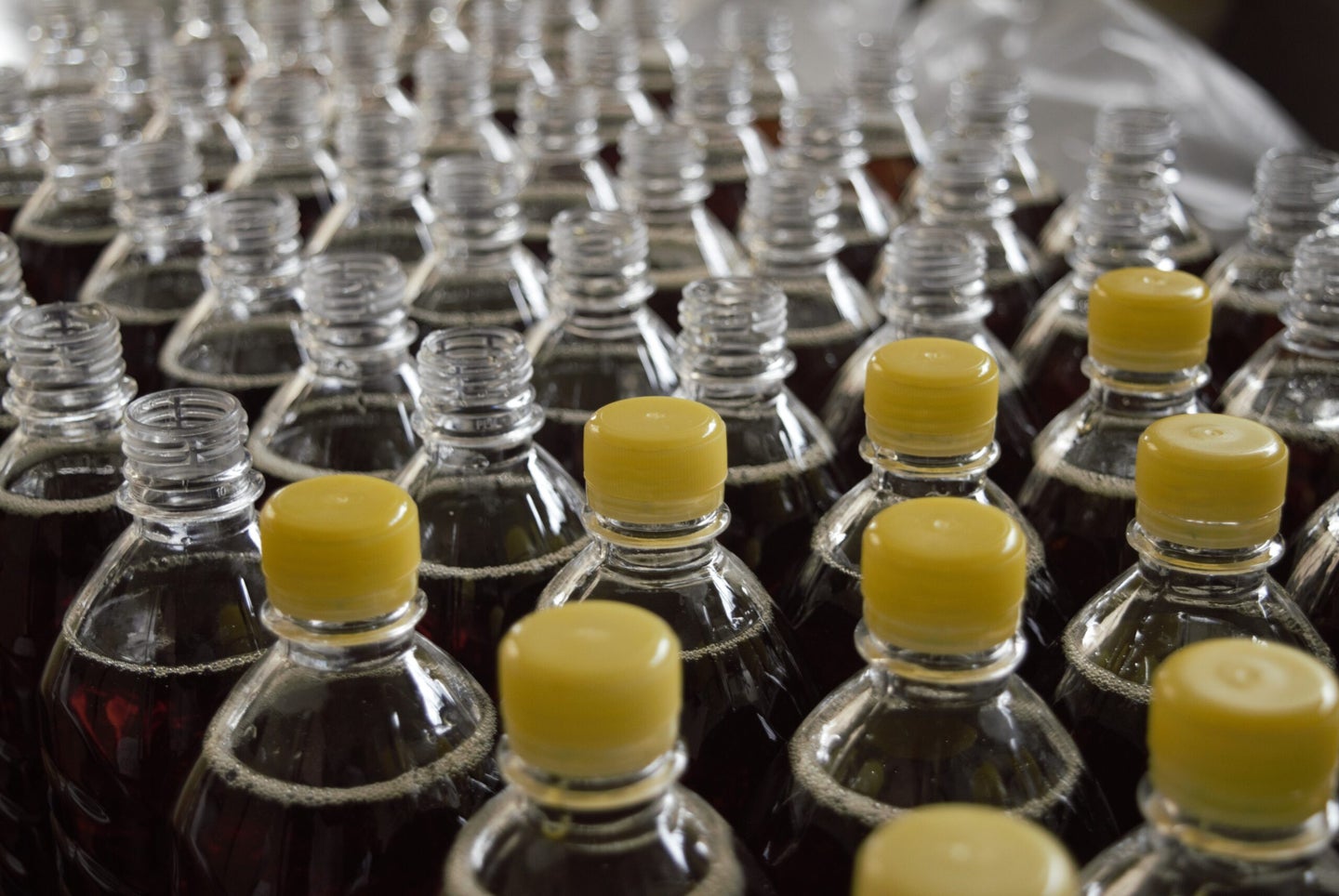 The making of plastic, not just the recycling, is an environmental problem. Arshad Pooloo on Unsplash
SHARE

The following is an excerpt from Thicker Than Water: The Quest for Solutions to the Plastic Crisis by Erica Cirino.

Cancer Alley snakes 85 miles along both banks of the Mississippi, forming a patchwork of sugarcane plantations and petrochemical complexes, the former with a legacy of slavery and soil degradation and the latter with a legacy of spills, explosions, and widespread pollution. As industry has closed in, breathing room has been hard to come by. Many people who live on the industrial fenceline are fearful for their lives.

Most recently, Lavigne has spoken out against the planned construction of a $9.4 billion plastic and petrochemical complex in Welcome, a predominantly African American community. So far, she and RISE have succeeded in staving off the completion of this latest industrial development—owned by FG LA LLC, a company related to major Taiwanese manufacturing conglomerate Formosa Plastics—to buy up land in St. James Parish, through an assortment of justice-seeking community actions and other campaigns. Formosa Plastics is the world’s fourth-largest producer of petrochemicals and plastic.

Earlier this year, United Nations human rights experts called for an end to racism in Cancer Alley, a place where communities of color bear disproportionate risk to industrial hazards. This month, a new report on Formosa Plastics runs through the company’s messy environmental, economic, and legal track records. One of experts’ top recommendations: rescind Formosa’s permits in St. James, Louisiana; get the company out.

Some may believe that, in a region already replete with chemicals, stopping Formosa—one plastic plant—would provide only trivial benefits to public health. In reality, such a victory would not only spare the residents of St. James from additional exposure to pollutants but would also be a win in the fight against climate change—another massive crisis we are now facing.

As Peggy Shepard, co-founder and executive director of WE ACT for Environmental Justice in New York and newly appointed co-chair of the White House’s first environmental justice advisory council told me: “It is essential to dismantle these institutions, because they are not going to concede power on their own. We must transition away from an economy based on fossil fuels, and that includes plastics. Our future depends on that.”

And as we build up a new, renewable-powered world, “We need to ensure that it serves everyone—not just those currently in positions of power,” Shepard added. Focusing on equity, rather than equality, she said, and prioritizing underserved communities’ transition from fossil fuels and plastic production to renewable energy sources and materials is a good place to start. “Decades of disinvestment driven by racism has put communities of color at a massive disadvantage. This is our opportunity to fix that.”

Our collective attention to climate change continues to grow as its deleterious effects—warmer air and seas, widespread wildfires, more intense and frequent storms, and species extinction, among them— become more apparent to us all. But humanity has collectively struggled to take the necessary step of shutting down the fossil fuel and plastic industries, because we have become entirely reliant on fossil fuels to navigate our hyperconnected, super-fast modern human society.

Recently, we got a glimpse of what leaning less heavily on fossil fuels could mean for us—and the industries we must disassemble: those dealing in oil, gas, petrochemicals, and plastic.

By April 2020, the coronavirus pandemic ground daily life to a halt for many people around the world. During the pandemic’s peak, our carbon footprints were smaller than they’d been in a long time. Lockdowns, travel bans, business shutdowns, quarantines, and curfews forced people to stay local and make do. As a result, the world’s collective carbon dioxide emissions dropped by 17 percent from 2019 levels.

This is a not-insignificant number when you consider that the world’s top climate scientists say global emissions must fall by at least 7.6 percent annually until 2030 in order for humanity to even slightly reduce the disastrous, rapidly accelerating consequences of climate change.

Consequently, as the pandemic hit and demand for and values of oil and gas dropped precipitously, some smaller petrochemical companies were forced to shutter while a few larger companies issued temporary plant shutdowns and employee furloughs.

Meanwhile, residents of some of the world’s largest cities—at least, those not living in wildfire zones—collectively reported that the air they breathed seemed cleaner than usual, even in some notoriously smoggy urban centers.

As soon as regulations implemented to quell the pandemic were eased later that spring, global emissions began rising and air quality plummeted again, especially in industrial areas. By June 2020, lifting and uneven restrictions on travel and work pushed the world’s greenhouse gas emissions back up to a measly 5 percent below 2019 levels, according to a report by the World Meteorological Organization.

Although the slowdown in emissions caused by the COVID-19 pandemic was temporary, some experts, including climate activist Bill McKibben—author of The End of Nature, the first popular book written on global warming, published in 1989—have posited that petrochemical companies are finally losing some of their political and economic clout. “It’s not a spent force by any means, but, even in the past few weeks, events have shown it to be waning where for a century and a half it has waxed,” McKibben wrote in The New Yorker in 2020. In his article, he cites grassroots efforts protesting petrochemical development, university divestment campaigns, and the development of affordable renewable energy as major contributors to the fossil fuel industry’s downshift in power.

Indeed, sensing a global shift in climate change policy, and reacting to new emissions agreements, Big Oil and Gas is banking on turning ancient carbon stocks—particularly shale gas—into plastic, instead of continuing to produce fossil fuels primarily to be burned for energy. In the US alone, major petrochemical companies like ExxonMobil, Saudi Aramco, and Shell have put more than $200 billion into several hundred natural gas plastic and chemical facilities since 2010, according to the American Chemistry Council.

Plastic production reached 311 million metric tons globally in 2014. That number is expected to double before 2030 and quadruple by 2050. Sales of petrochemicals, including those used to make plastic, regularly earn the world’s top fossil-fuel dealers annual revenues in the tens of billions of dollars. These super wealthy corporations continue to target their development in underserved communities. In the US, plastic production is ramping up along the Louisiana and Texas Gulf Coast and in Cancer Alley, where so much petrochemical infrastructure already exists in communities of color. It’s also expanding in the rural Ohio River Valley and Appalachia, where fracking wells brimming with natural gas are polluting thousands of low income neighborhoods.

Plastic can be made from either oil or gas, and so are most of its additives. Plastic’s main ingredients are pulled from freshly extracted fossil fuels in oil refineries and gas processing plants: naphtha, a crude oil–based substance; and ethane, a liquid natural gas.

Extracting fossil fuels from the earth and turning them into plastic requires not only massive amounts of petrochemicals but also energy—and currently, this energy comes from burning more fossil fuels. Petrochemicals—including those used to make plastic—are set to become the biggest driver of growth for the global oil industry by 2050. And petrochemicals are expected to become a significant driver of gas industry growth: By 2030, global production of petrochemicals will require an additional 56 billion cubic meters of gas—approximately half of all of Canada’s present level of natural gas consumption. Greenhouse gas emissions linked to plastic production now hover around 900 million metric tons of carbon dioxide per year. That number is expected to surpass 1.3 billion metric tons, the equivalent annual carbon output of nearly three hundred coal fired power plants, by 2030. Those numbers exclude greenhouse gas emissions emitted during recycling and incineration, which also require energy, as well as landfills, which emit high levels of potent greenhouse gases, and from plastic itself.

Many of the people worst affected by the climate crisis are also affected by environmental racism. Like Sharon Lavigne and her neighbors in St. James. Southern Louisiana has proven among the regions hardest-hit by severe weather such as high temperatures and humidity, and rising and warming seas. Katrina, Rita, Harvey, Laura, Delta, Ida…. The storms are rolling in faster, harder, more devastatingly each time.

It’s clear: The more plastic people choose to put on the planet, the more forcefully humanity condemns itself to life on a dangerously warming planet—unfairly burdening some more than others.

Excerpted from Thicker Than Water: The Quest for Solutions to the Plastic Crisis by Erica Cirino; Copyright © 2021 by the author. Reproduced by permission of Island Press, Washington, D.C.