Your compostable cups and containers aren’t reversing the plastic problem 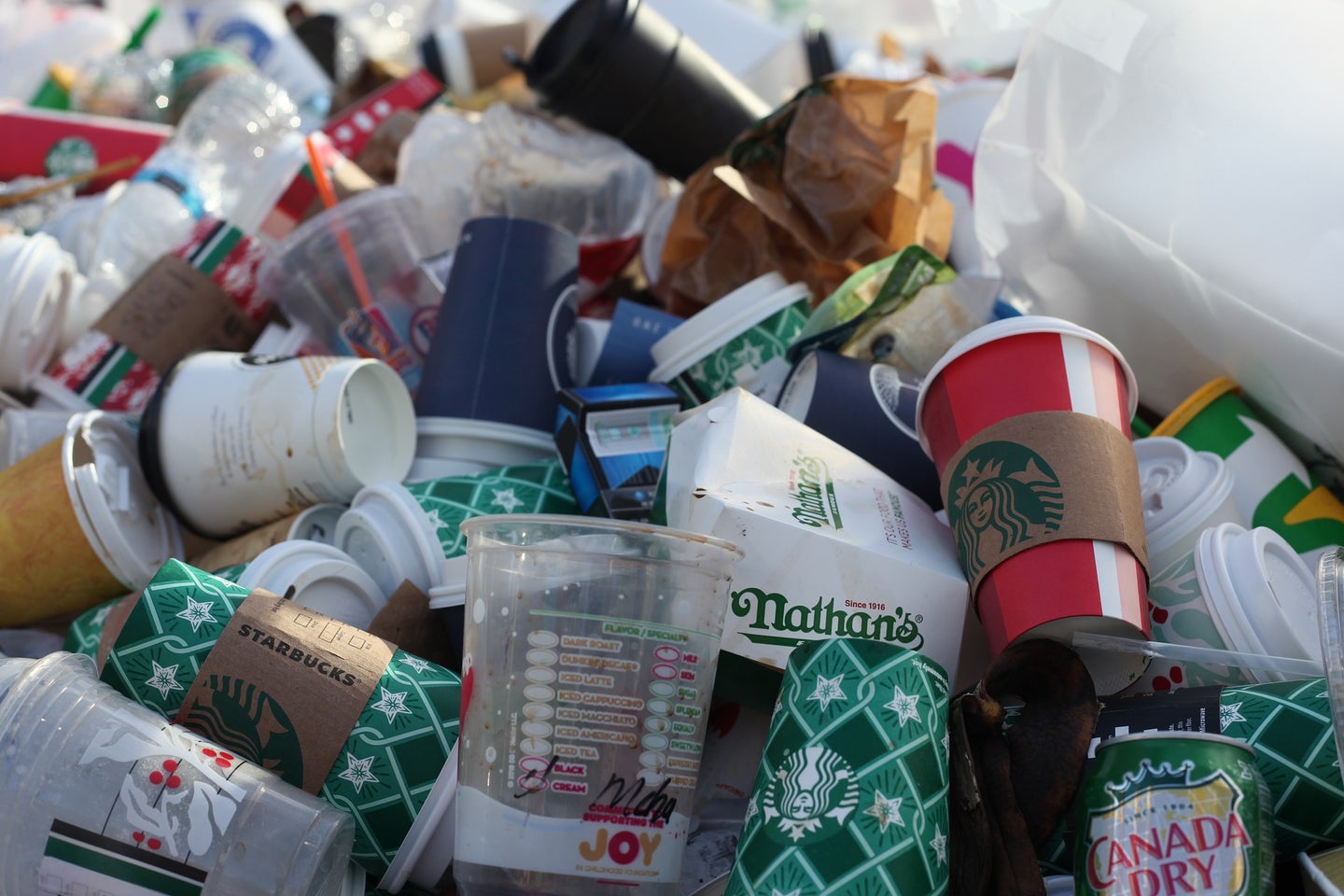 In the quest to avoid plastic trash like the above, PLA cups and containers have become commonplace. But compostable single-use items might not be much better for the environment. Filmbetrachter
SHARE

It looks like plastic, it feels like plastic, and it holds your favorite beverage like plastic. But somewhere on the cup you’ve been handed is a label that reads “100 percent compostable”. How is that possible?

Simply put, this plastic-y material is polylactic acid (PLA), a polymer made from lots of little bits of lactic acid molecules derived from the fermentation of starch like corn, cassava, or potato plants. Single-use cups and take-out containers made from PLA, sometimes called bioplastic or biopolymer, have become increasingly common in recent years, under the assumption that a compostable container is better for the environment than a standard plastic one. In actuality, it depends on where you are and who you ask.

Compostable plastics like PLA do generally compost under the right circumstances. But contrary to what you might think, just because it composts, doesn’t mean a product is automatically “green”.

[Related: How to start composting at home.]

In the greenwashed world of food service products, it’s important to understand that not all labels are equal, says Sego Jackson, a waste management strategic advisor and policy liaison for Seattle, Washington, one of the few cities in the country that requires businesses to use recyclable or compostable products.

You might come across a clear cup labeled simply “biodegradable,” or encounter labels that say things like “made from plants” or “plant-based”. But this doesn’t mean your cup is compostable or made from anything other than standard plastic, Jackson says. These vague terms can mean any number of things, but often just refers to the fact that some plant-produced starch was mixed into the standard plastic, he adds. This type of plastic may be less durable over the long term and break down into smaller pieces more quickly, but small plastic bits are still plastic and will persist in the ecosystem.

However, if a cup or container is labeled compostable, it probably is under very specific conditions. Most of the compostable PLA products out there have been inspected and certified by the Biodegradable Products Institute (BPI), a non-profit organization that runs independent tests of compostable products to verify that they break down. In Washington state, for instance, BPI certification is required by law before a single-use product can be labeled compostable at all.

Still, these very specific composting conditions are tough to come by. Tossing a PLA cup into your home compost pile won’t break it down, says Nora Goldstein, executive editor of BioCycle magazine—a publication covering the organic waste recycling and composting industry. “I put [compostable plastic] cups from NatureWorks in [my home compost] from the early fall of last year, and they’re still there,” she says. The only way to make the cups actually break down, she says, requires a specific set of microorganisms used in industrial composting that need temperatures well above what most backyard heaps reach to thrive.

The cups and containers have been tested in both the lab and at composting facilities to ensure they break down within an approved timeline, usually six months, to comply with the ASTM International standard, says Craig Coker, owner of Coker Composting and Consulting in Troutville, Virginia and a senior editor at BioCycle.

While composting PLA products is certainly better for the environment than tossing them into the trash, there’s still quite a few issues with today’s composting system. To start, there are very few facilities in the US that are set up to handle PLA products. In a survey of composting facilities across the country, BioCycle found that only 49 out of 4,700 composters nationwide accepted compostable plastic products. Although intentions may be good, a restaurant or venue providing compostable cups doesn’t mean much if the local waste system isn’t set up to process them.

And, there are a few reasons composters are hesitant to change their ways.

The first, and most prevalent issue, according to Coker and another BioCycle survey is that PLA and standard plastics are difficult to tell apart. People often confuse one for the other, especially given the ambiguity of the labeling process. As a result, regular plastic contamination can easily make it into the compost stream if a compost manufacturer decides to accept PLA cups, says Jackson. And regular plastic truly will not break down, no matter how hot the compost pile. This plastic contamination can reduce compost value, says Coker, as well as contribute to plastic pollution in the soil and waterways. Further, some industrial composters operate on a faster cycle than what’s appropriate for breaking down PLA, says Coker, and aren’t incentivized to adapt.

Compost made with PLA containers in the US also can’t be certified organic. This can be a big problem for composters who get the bulk of their revenue by selling to organic growers, says Coker.

With so few facilities willing and able to accept PLA, lots of it ends up in the landfill, says Rafael Auras, an associate professor at the Michigan State University School of Packaging. Landfilled PLA doesn’t necessarily break down any faster or better than regular plastic, which can take 100s of years to degrade into small bits that never really go away. And if PLA does happen to end up in hot enough landfill conditions, the microorganism-rich but oxygen deprived environment can cause these “eco-friendly” cups to actually contribute to greenhouse gas emissions by producing methane. While this carbon footprint seems small compared to our food system’s giant methane problem, according to a 2012 study from NatureWorks LLC, landfills remain a less-than-ideal burial ground for compostable PLA.

PLA can also inadvertently end up in the standard plastics recycling stream, says Auras. There, compostable plastics can cause contamination, necessitating costly sorting interventions for currently unprepared facilities. “The distribution of these products and use and sales outpaces the available infrastructure,” says BioCycle’s Goldstein.

Even when composted, PLAs bring up a lot of questions

When a compostable cup makes it to the right facility and gets cycled into the soil, there’s still debate about the total environmental impact of these products. In 2019, the Oregon Department of Environmental Quality (DEQ) published a review of life cycle assessments (LCAs) of different types of compostable single-use foodware. Their findings suggested that standard plastics were actually better than compostables for the environment when taking into account compostable alternatives’ dependence on an already fraught agricultural system. Monoculture corn, the major source for PLA production in North America, has lots of well established downsides for the planet.

Not everyone agrees with the Oregon DEQ’s conclusions, however. In one response, BPI states that many of the studies considered were older than five years, a large time gap for quickly-changing compostable manufacturing technology. Rhodes Yepsen, executive director at BPI says negative impacts from the fossil fuels behind traditional petroleum based plastics, were largely excluded from the review.
Another unaccounted for benefit of compostable foodware is its ability to divert food waste away from landfills—leftover food can be just chucked with its container into a green bin without second thought. Food waste is the third largest human-caused source of methane emissions nationwide, and trashed leftovers produce much less methane in the compost than if landfilled.

Oregon has stuck by it’s report, and a coalition of the state’s composters have refused to accept PLAs. However, other studies have ranked PLAs above single-use standard plastics in terms of greenhouse gas emissions and overall climate change impacts. So far, there’s no real clear answer on what PLAs impact on the planet really is.

[Related: Can this Colorado man put a dent in our trash problem?]

What needs to be done to make foodware truly green?

If you’re given a compostable cup in Seattle or San Francisco—rejoice! Throw it in the correct bin and it will be composted into soil and used to grow future crops. But if you’re anywhere else in the country, it’s fair to be a little skeptical. Some large venues like stadiums have developed their own composting programs, and  likely have partnerships in place to handle the waste. But your home compost heap certainly doesn’t, and your neighborhood café might not either.

The debate about single-use compostables vs. recyclables may rage on, but reusable items will almost always be better for the environment than either, says Jackson. Although compostable cups might be a useful tool in a pinch, an even better option, he says, is a cup you don’t throw away at all.