Citizen-scientists helped confirm the feathery theory behind the markings. 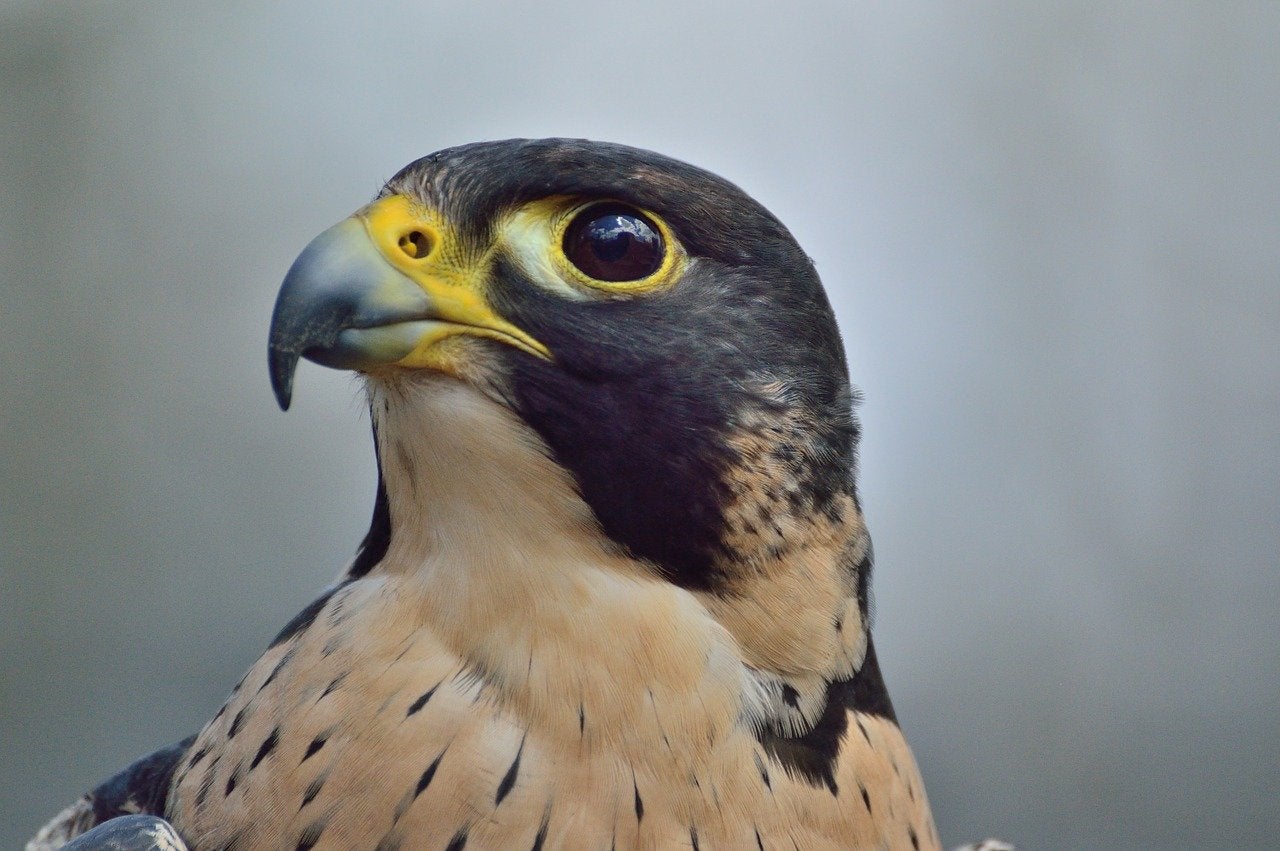 Scientists have long theorized that falcons’ distinctive dark plumage beneath their eyes, known as the “malar stripe,” evolved to prevent sunlight from obstructing their vision. Much like how American athletes don “eye black” to help them catch whizzing balls, the inky feathers improve avians’ ability to pinpoint and target agile prey—at least that was the theory.

Until this month there was no empirical evidence to prove the hypothesis. Now, researchers at the University of Capetown have published the first scientific study giving weight to the theory in Biology Letters.

To do so, scientists analyzed the malar stripe on peregrine falcons, prolific aerial predators that can be found on every continent besides Antarctica. They found the larger and darker the malar stripe, the more likely the raptor lived in a habitat with greater solar radiation.

Arjun Amar, a co-author of the study and an associate professor for the FitzPatrick Institute of African Ornithology at the University of Capetown, came up with the idea for the project while prepping for a lecture on raptors.

“I basically came across the malar stripe, which I knew existed, and everything was stating it as a fact that it reduced solar glare,” said Amar. “When I introduce information to students, I like to give them the raw papers associated with the ideas. I found there wasn’t anything at all on the stripe. There was no research on it functioning as a way to reduce solar glare.”

Part of the reason may be that pulling enough data from observations alone would have been difficult, especially during a global pandemic that prevented travel. Instead, the ornithologists relied on two digital databases where birdwatchers could upload pictures with a geotag: iNaturalist and the Macaulay Library from Cornell University.

“My favorite part about this project is that it explored an idea that came about a long time ago with modern technology,” said Amar.

The remote, online data provided them with over 2,000 images of peregrine falcons from 94 “countries” ranging from South Africa to Russia. Because the United States and Canada cover such large geographic areas (and there were plentiful pictures), individual states were counted as countries in the analysis.

[Related: A peregrine falcon’s power to migrate may lie in its DNA]

“No peregrines were observed besides those I happened to see on my drive to work,” joked Amar.

Each malar stripe was then scored based on its width, length, prominence (or darkness), contiguity, and elongation. The ornithologists also took into account the distortion of an image or how a bird’s positioning could impact the appearance of the patch.

They then compared these scores to the location in which each image was taken. Of all the environmental variables they looked into, such as temperature and rainfall, only solar radiation was positively correlated with the overall score of the sooty streaks.

“I think it’s fantastic the authors gathered images to test their hypothesis using publicly available photos online,” said Andrew Stillman, a postdoctoral fellow at The Cornell Lab of Ornithology. “Non-scientists and nature enthusiasts make important contributions to new discoveries all the time. This study highlights the ability of community science to teach us new and unexpected things about birds.”

When glare from the sun hits a white surface, it bounces back. If falcons had lighter colored feathers on their cheeks, the sun’s rays would rebound into their eyes, reducing their vision. But black absorbs light, which is how those dark tufts soak up a blinding flare, says Amar. This improves contrast sensitivity, or the ability to see details and discern objects from their backgrounds—like high-speed prey against a blaringly bright sky.

Dark eye marks aren’t unique to peregrine falcons. They can be seen in a variety of falcon species, as well as other animals like cheetahs. That’s why the study’s lead author, Michelle Vrettos, a master’s student at the FitzPatrick Institute, is conducting a further analysis. She is now analyzing 40 different species of falcons to determine why some have strong malar stripes, while others, like the merlin falcon, lack them entirely.

Amar hopes new studies can determine if this feature is more common among predatory animals. He’s also curious if black eye markings have other functions besides high-speed pursuits under bright rays.

Beyond the pure fascination of why animals look the way they do, the study may have other applications: “From an applied perspective, we can give weight to the idea that eye black for athletes or even black around a camera lens improves contrast sensitivity,” says Amar. “So you know, this research has potential implications beyond biology.”