The carcinogen is banned in 55 countries, but not here. 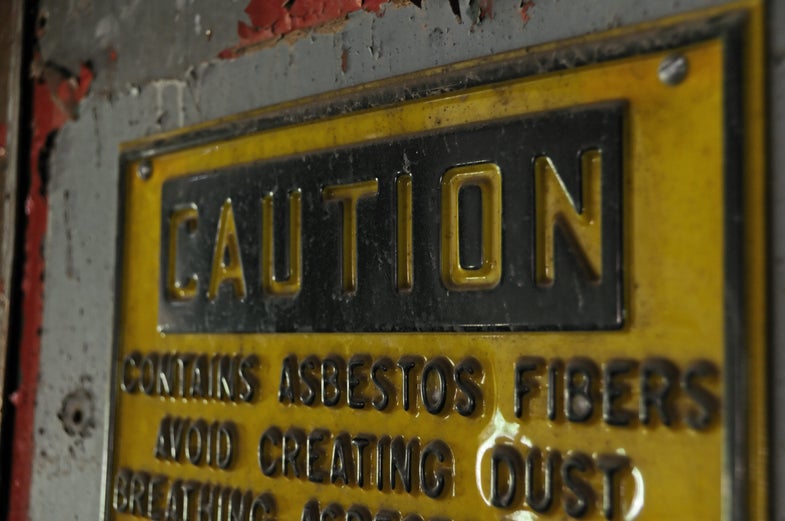 Asbestos is arguably one of the most well-known cancer-causing agents, and one that the Environmental Protection Agency has been trying to regulate on and off for decades. The toxic construction material, banned in other 55 other countries, made the news earlier this week amidst fears that the EPA is easing the way for an uptick in asbestos manufacturing.

In fact, asbestos never left the U.S. market, though there are certain restrictions limiting its uses. Instead, the EPA plans to track asbestos imports for review every time a manufacturer wants to use them for a new purpose, as is required by the law. But since the current EPA has eyed more lenient regulations on everything from pesticides to air pollution from cars and coal-fired power plants, environmental groups fear that the “new uses” review could signal an uptick in asbestos manufacturing, despite its dangers to public health, rather than a move toward the total ban the EPA sought under the Obama administration.

Congress enacted the Toxic Substances Control Act in 1976 to “comprehensively regulate chemicals and toxic substances that we come into contact with in the everyday,” starting with asbestos, says Melanie Benesh, a legislative attorney at the Environmental Working Group. “Because it’s one of the toxic substances that everyone has heard of and knows is bad, it’s become a poster child for this law and why it is broken.”

Asbestos is an umbrella term for six naturally-occurring fibrous minerals that contain some amount of silicon and oxygen. Greek for “unquenchable,” asbestos doesn’t evaporate, dissolve, burn, or react readily with most chemicals, making it an ideal insulation and fireproofing material. Asbestos can be found in attic and wall insulations, vinyl floor tiles and roof shingles, around hot water and steam pipes, and in automobile brakes.

Because the filamentous material is easily friable, or crumbled to a powder when handled, asbestos is easily inhaled into the lungs, where it can cause mesothelioma, a rare and aggressive cancer that grows in the tissue lining around the organs.

Between 1999 and 2015, the Center for Disease Control counted 45,221 deaths from malignant mesothelioma in the United States. Though most deaths occurred in people 85 or older, the fact that people younger than 55 were also dying from mesothelioma suggests that occupational and environmental asbestos exposure was still a problem. Asbestos is also associated with lung cancer and other lung diseases. In light of its toxicity, the Environmental Protection Agency banned most asbestos products in 1989, only to have the rule overturned in court. As a result, certain asbestos products are restricted in the U.S., but asbestos is still allowed in other productions.

In 2016, Congress updated the Toxic Substances Control Act in an attempt to strengthen it, and asbestos was put back on EPA’s roster as one of the first ten chemicals for review.

The agency released a framework in June 2017 for how it would evaluate exposure risks from asbestos being produced now or in the foreseeable future. The guidelines allow EPA to exclude legacy sources of exposure from consideration—for example, asbestos installed into the frames of schools and older buildings using outdated production methods.

“They’re only going to look at a very narrow use for asbestos and ignore that people might be exposed to it from older cases,” says Rena Steinzor, a professor of environmental law at the University of Maryland. But failure to account for pre-existing routes of asbestos exposure could downplay the overall risk and lead to a less protective evaluation.

Separately, to stay on top of future uses, the EPA is requiring manufacturers to give them at least 90 days notice before importing asbestos to make new asbestos products the EPA doesn’t currently know about. The rule also forbids companies from making new asbestos products until the EPA has review each new use, which include certain types of adhesives, sealants, roof coatings, gaskets, pipeline wrap, sealant tape, and vinyl floor tile, to name a few.

On the one hand, the rule makes sense because the EPA needs some time to decide whether the new uses are okay, Steinzor says.

“But why not just ban them when we know asbestos are not safe,” Benesh points out.

The market seems ready to take advantage of the EPA’s mixed signals.

A Russian asbestos mining company, perhaps sensing an opportunity, posted photos of its products stamped with a seal bearing Donald Trump’s face on Facebook. The social media caption read, “Donald is on our side!”

President Trump, who made his businesses in the real estate sector, has expressed support for asbestos as a maligned construction material in the past. In 2012, he tweeted that the World Trade Center would not have burned down if it had been fire-proofed with asbestos.

Meanwhile, asbestos imports to the U.S., which have declined overall and in the last few years, rose 45 percent between 2015 to 2016 to 700 metric tons. Ninety-five percent of the asbestos entering the U.S. in 2016 came from Brazil, with Russia supplementing the rest. However, Brazil banned asbestos mining, use and commercialization in November of 2017.

“Maybe five or ten years ago, you wouldn’t think anyone would be reintroducing asbestos to the marketplace,” says Steinzor. “It’s a sign of the times that this is happening.”