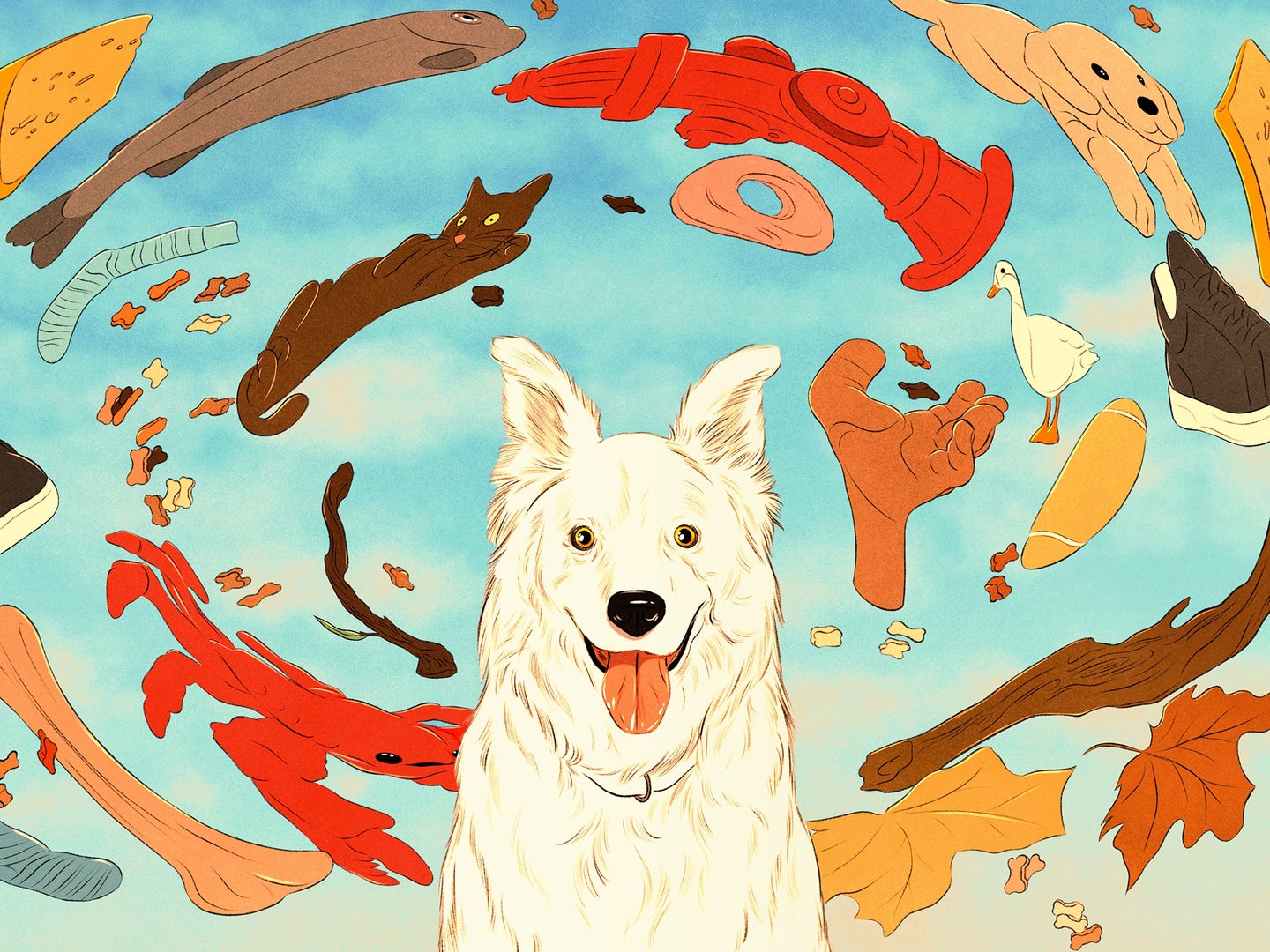 While humans typically recall memories as images, dogs and cats might experience them as scents or other senses. Isabel Seliger/Popular Science

Do cats and dogs remember their past?

We might think cats live in the “meow” and dogs fur-get time, but their ability to dream and recall details suggests otherwise.

WHEN I MET my cat Pearlita, she lived in an alley between my apartment building and a gas station. She drank from puddles polluted by engine leaks and ate whatever she could find. Ten years later, with Pearlita curled up on my lap, making it hard to type, I can still remember how she wolfed down the food I put in the alley and how easy it was to lure her inside with more.

But does she remember her life on the streets? And if so, which parts of it?

This question has probably occurred to almost anyone with an animal friend, but for simplicity’s sake, we’ll limit this discussion to our feline and canine companions. Certainly they behave as though they have memories—after all, your special furball doesn’t treat you like a stranger each time you walk through the door—and evolutionary theory suggests as much: It behooves any long-lived animal to have long-lasting recollections. There have been rigorous scientific experiments, too, not enough to fully understand our dogs’ and cats’ memories, but enough to confirm their existence and to raise some interesting questions about how they compare to our own.

“It is tricky, because we can’t directly ask them,” says Mikel Delgado, an animal psychology researcher from the University of California, Davis who now dispenses advice on cat behavior with the company Feline Minds. “The way I think about it is: What’s important for animals to remember?”

For a cat or dog—or human—to remember events from way back, they must first be able to recall what happened just a few moments ago. To study this in controlled settings, scientists devise experiments in which animals are rewarded for correctly identifying objects they previously saw, asked to avoid obstacles without looking at them, or monitored while searching for food they saw being hidden. These methods don’t capture everything that cats and dogs can recall, of course; they’re intended to tease out the basics of their cognition.

A few decades’ worth of data have shown that the species do indeed have short-term recall, and they convert certain events and interactions into long-term memories as they sleep and, crucially, dream. “Dreaming is often connected to the reorganization of memory,” says Ádám Miklósi, an ethologist and canine cognition specialist at Hungary’s Eötvös Loránd University. Both dogs and cats display the telltale neurological signatures of REM, short-wave sleep, and other patterns of snoozing that, in human and rat brains, are linked to the sorting of a day’s experiences.

One of the best-documented examples of long-term memories in dogs involves Chaser, a border collie famous for learning the names of more than 1,000 objects in three years. Impressive as that is, however, such semantic feats don’t necessarily mean that Chaser, who died in 2019 at the ripe old age of 15, could remember his puppyhood. That requires so-called episodic memories containing the details of an experience, the who-what-when-where.

Until recently, scientists thought the canine mind was limited to associative memories: recollections of the relationships between experiences or events, but not the intricacies of the experiences and events themselves. Were that the case, then every time my dearly departed dog Comet climbed into our car the moment my parents started packing it, she wouldn’t have remembered the canoe rides, swims, and roasted marshmallows of past trips. Comet would simply have learned to identify the preparations with fun.

But in recent years, research conducted by Miklósi and his colleague Claudia Fugazza has shaken the idea that canines are restricted to such Pavlovian recall. In 2016 they confirmed, by way of an experiment in which they asked dogs to imitate actions modeled by a human minutes earlier, that the pooches did remember specific elements of what they’d experienced. In follow-up experiments, dogs repeated their own actions long after they first performed them, a finding that added an autobiographical layer to their episodic memories. Their thoughts didn’t just contain a jumble of disparate details, but were woven together by a sense of self.

As for cats, tests of whether they returned to containers where they were previously fed lend scientific support to their version of episodic memory. “Cat memory is probably very much like dog memory,” says Miklósi.

Still, he and Delgado note that this kind of reminiscence might differ from our own. Humans can reflect on their memories in spontaneous, self-directed ways: I can think about the first concert I ever attended, a Pink Floyd show, without needing to see the ticket stub to remind me of it. How cats and dogs guide their own recall—if they need cues to trigger it or have a proclivity, like us, for wandering the halls of memory—is a mystery.

It’s also less clear how our furry companions relive their distant memories. Mine play like a movie in my mind’s eye, which fits, as contemporary humans are a visually oriented species. But cats and dogs are far more reliant on other senses, especially smell. Could their recall come together as scents rather than images? Two studies—of dogs in a dark room finding familiar objects with their noses, and of kittens recognizing their mothers by scent after years of separation—suggest as much. “Animals, I’m sure, are much more multisensory,” Delgado says. “Their memories might be scent or sound and not necessarily the images that we tend to picture when we’re replaying an episode in our minds.” I can still see my first encounter with Pearlita. Perhaps she can still smell it.

Delgado also raises the question of language. In addition to being visually driven, human memories are structured by words and complex grammar, which some experts think is crucial to the power of recall. And while dogs and cats don’t have full-blown human-style language, they are able to communicate and represent meaning through sounds, postures, facial expressions, and other signals. Maybe memories formed without language are simply different, not weaker. They could even be more intense: less complex but undiluted by linguistic abstraction or, as Delgado points out, the second-guessing, what-if scenarios that humans tend to indulge in.

This and certain other questions about how cats and dogs perceive the past might prove impossible to illuminate scientifically and ethically. To empirically determine, for example, how adopted animals recall their people, we’d need to separate them from family for months—even years. “I’m okay with mystery,” Delgado says. “I’ve learned to live with the fact that there’s still so much we don’t know.” The details may be blurry, but it’s enough to know that our cats and dogs remember.

We hope you enjoyed “Pet Psychic,” Brandon Keim‘s new monthly column. Check back on PopSci+ for the next article in August.