Are Dogs Really Getting Sick Because Of Beneful?

Pet food regulation has never been stricter, but a recent class-action lawsuit begs to differ 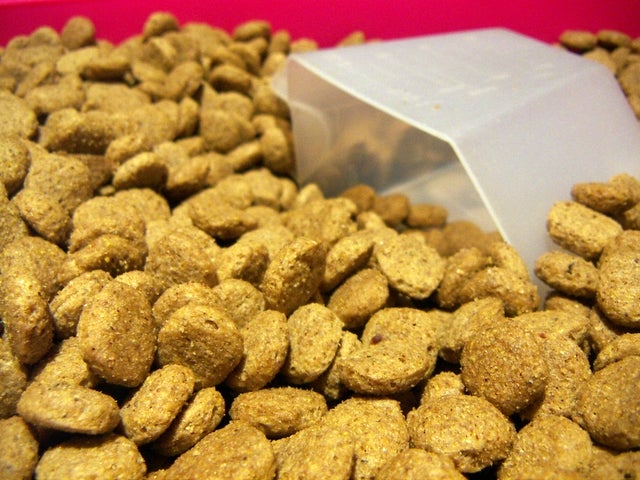 In February, California resident Frank Lucido filed a class-action lawsuit claiming Beneful, a dog food by Purina, made his dogs sick. In his complaint, he alleges the dry food was the reason his three dogs, which were living in separate houses, all fell ill or, in the case of his 8-year-old English bulldog, died. More than 3,000 other pet owners have joined the lawsuit after liver failure and other intestinal issues arose in their dogs.

In response to the complaint, Beneful said in a statement, “We take these allegations very seriously and stand by our product, which is backed by Purina’s strict quality controls and comprehensive food safety program.”

“People and pets eat every day,” says Julie Churchill, a veterinary nutritionist. “Whenever something goes awry, it’s really human nature to look to the food.” And that’s pretty much all dogs do: eat, sleep and, of course, act adorable. But that doesn’t mean the food is actually to blame. Here’s why Lucido’s case might have more fiction in it than fact.

Whiskey manufacturer Fireball picked up media attention in 2014 for having propylene glycol in its cinnamon whiskey and got pulled from European shelves. The chemical gets a bad rap because it is also found in non-toxic anti-freeze. However, it has no known health risks. The Food and Drug Administration classifies propylene glycol as generally safe for consumption, and Purina stands by the chemical, saying it helps keep the kibble “soft and moist.”

“Propylene glycol is an ingredient that goes into human food as well as animal foods for texture,” Churchill says. “It is not toxic.” In human food, you can find propylene glycol in everything from granola bars to ice cream, and from food coloring to flavored iced tea.

In his lawsuit, Lucido alleges that mycotoxins may also have played a role in making his dogs sick. Mycotoxins are the substances that fungi give off. Some won’t harm you, but others, like aflatoxin, can be toxic. Big dog food companies have strict quality assurance, which includes mycotoxin testing. Purina explains the process on its Beneful page, including how closely it screens for aflatoxin. They say their standards “are among the strictest in the pet food industry.”

Richard Hill, a veterinarian at the University of Florida College of Veterinary Medicine, says incidents of aflatoxin are relatively uncommon. But keeping fungus from growing and releasing different mycotoxins is really tricky. “It’s almost impossible to keep out of the food supply completely,” he says.

There are a number of reasons why the dogs could be falling ill with signs that look like food poisoning. As experts in veterinary nutrition and internal medicine, both Hill and Churchill have seen a variety of different cases that exhibited similar symptoms to what’s described in the court case.

“Diet is certainly one of the causes, but not the number one cause,” Hill says. The culprit could be any type of disease: viral, bacterial, and fungal infections included. But identifying the exact reason for why your pet is feeling under the weather can be tricky, even with testing.

“When you’re screening, you have to know what you’re looking for,” Churchill says. “You can’t really run the gambit.” That’s because toxicology tests look for certain chemicals, like alcohol and other drugs in humans. If veterinarians aren’t sure where to start, it’s hard to be precise.

Food storage plays a key role in keeping food toxin-free. Like human food, dog food has the tendency to grow fungus if it’s kept in humid places. A garage in Florida, for example, could get too much exposure to moisture. For dry dog food, Hill suggests storing it in a dry place.

This isn’t the first time Beneful’s been hit by lawsuits or recalls. Purina cites two other class-action cases in the past that were both dismissed. The last major pet food scare happened in 2007, when the FDA received more than 12,000 reports within a three-week period–more than double what the agency generally sees in a year. Investigators found that some dog food ingredients imported from China contained melamine. Melamine has no approved food uses, but is used in other parts of the world as a fertilizer. More than 150 pet food brands, including companies such as Purina, Hill’s Pet Nutrition, and Del Monte issued recalls. The contamination left more than 300 dogs and cats dead, with thousands reporting illness.

Churchill says that recall led to increased attention from all sides of the food industry. “Since then, the pet food regulation has tightened up,” she says. “Tolerance for things has gone way down.”

How To Keep Your Pets Safe

Pet food companies, especially one as big as Purina, keep samples of every lot they produce. Both Churchill and Hill advise pet owners to save the lot number on the food they think is making their dog sick, and cut out the UPC code if you’re storing the food in another container. That way, if anything goes awry, a pet owner can call the manufacturer’s quality assurance hotline and tell them the specific bag of food the pet’s been consuming. The company will test the sample to see if there’s anything wrong with the food, and if there is, they can issue a recall. If you’re still worried, Churchill says the best thing to do is store 100 grams of the bag in the freezer. That way, the food is preserved in the same state in which it entered the house.