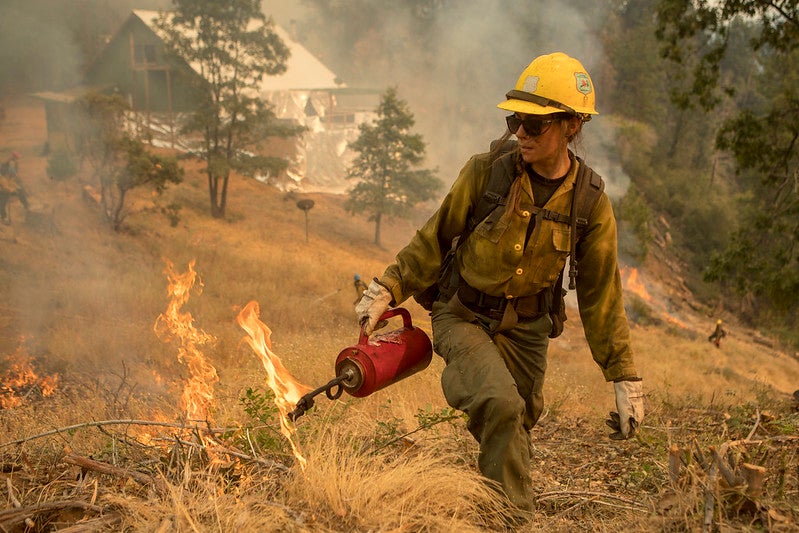 A member of the Tahoe Hotshot crew uses a drip torch for a controlled burn at Sierra National Forest in California. Kari Greer/US Forest Service
SHARE

On March 25, the National Weather Service issued a “red flag warning” for thousands of acres stretching across six Western states, including New Mexico, Colorado, and Nebraska. A combination of warm temperatures, low humidity, and strong winds had created the perfect conditions for a wildfire to spark.

No fires broke out—this time. But the late March alert was a reminder that wildfire there were many more red flag warnings to come this spring and summer. While fire experts say it’s too early to know how severe the 2020 season will be, in areas around the West, the land is primed to burn. The National Oceanic and Atmospheric Association’s most recent three-month drought outlook has drought conditions across large swathes of California, Oregon, Nevada, Utah, Arizona, New Mexico, and Colorado persisting to the end of June.

But this season, firefighters—already engaged in one of the world’s riskiest occupations—will face another invisible threat: COVID-19. The pandemic has raised the stakes at the worst possible time, forest managers say, and is forcing firefighters, officials, and communities to rethink how they combat blazes.

The US has never had to contend with a wildfire season like this one, forest officials say. Almost every aspect of preparing for and fighting wildfires will have to change. Training sessions and emergency shelters need to be turned into no-contact zones; preventative controlled burns must be scaled back.

The way firefighters work—moving from blaze to blaze and camping in groups while not on the front lines—is the perfect incubator for COVID-19. “You have a bunch of people eating together and living in a relatively confined space, with maybe less than ideal sanitary situations going on,” says Greg Griffiths, a board member of the National Association of Forest Service Retirees, who served as the director of the Forest Service’s Southwestern Region and helped guide aerial firefighting efforts. The close conditions have been known to cause “camp crud”—upper respiratory illnesses that spread far and fast—and could prove especially dangerous in a pandemic, Griffiths adds.

Federal and state forest agencies are developing special pandemic guidelines that call for social distancing and other measures to help reduce the risk of contracting or spreading the disease among fire fighters. Some training sessions have been canceled, though they could be moved online. “It was very apparent that previous suppression methods of gathering and supporting large numbers of firefighters was not going to be practical for the coming fire season,” said Joe Reinarz, an incident commander with the US Forest Service, in an emailed statement.

Now, officials across the West are racing to figure out how to protect crews from COVID-19, while still effectively shielding communities from severe wildfires. One solution would be to shift the attack to the air—but commissioning air tankers, the small planes that drop plumes of red retardant, is expensive. In any case, they “wouldn’t be able to control the fire as quickly and efficiently” as a combination of aerial and ground crews working in tandem, Griffiths says.

Some states are taking additional precautions. New Mexico is developing protocols that incorporate elements of the federal guidance with Governor Michelle Lujan Grisham’s COVID-19 directives, such as conducting health screenings on firefighters before they’re sent out for a job, disinfecting tools and equipment throughout the day, and providing individually wrapped meals.

“We’re going to need to be extraordinarily cautious, so that we don’t have a firefighter who’s symptom-free infecting people,” says New Mexico State Forester Laura McCarthy.

McCarthy and other New Mexico officials have particular reason to be on high alert. While wildfire is a natural part of forest ecosystems in the Southwest, New Mexico has had several unusually large conflagrations over the past two decades, including the May 2000 Cerro Grande fire that destroyed 235 homes and the 2011 Las Conchas fire that scorched 156,000 acres. The ponderosa- and conifer-cloaked mountains northeast of Santa Fe—a mosaic of federal and state lands long overdue for a major fire—are a “top priority” for fuel-reduction projects to keep the capital city safe, McCarthy says. Against that ominous backdrop, the state also ranks among the 10 most vulnerable to COVID-19, based on factors like emergency preparedness, the quality of the healthcare system, and high-risk populations, according to an analysis by Innerbody Research. As of April 8, there were 794 confirmed COVID-19 cases and 19 deaths.

Even the work of reducing the risk of wildfire has been compromised by the virus. In some areas, including the Forest Service’s Rocky Mountain Region and pockets of the Southwest, forest managers have postponed prescribed burns—small deliberate fires that clear fuels—to protect crews from contracting or spreading the virus. And with meteorologists predicting a hot, dry summer in parts of the Southwest and California, the land and air will be primed for super-hot fires that send lung-choking smoke into communities already under siege by COVID-19.

“I think the risk is unquestionably heightened to a significant degree” in places where the novel coronavirus and wildfire smoke could merge, says Christopher Carlsten, who leads the University of British Columbia’s Department of Respiratory Medicine. Both COVID-19 and smoke—a mix of particulate matter and gases such as carbon dioxide, nitrogen oxides, and carbon monoxide—cause inflammation of the lungs, narrowing air passages and making it hard to breathe.

And with fires beginning earlier in the spring and persisting later into the fall due to climate change, communities may have to contend with the dual risk of COVID-19 and wildfire for several months.

As of April 8, there were four active wildfires in Arizona and one in New Mexico, according to the Southwest Coordination Center fire-activity map. But the severity of the 2020 season will also depend on the actions of homeowners and forest visitors. A 2017 study in the Proceedings of the National Academy of Sciences shows that close to 84 percent of wildfires in the US are started by humans. With more people self-isolating out in nature during the pandemic, there needs to be a similar sense of social responsibility to stop fires from happening in the first place, says Eytan Krasilovsky, deputy director of the Forest Stewards Guild, based in Santa Fe. “One thing we don’t need right now is more fire ignitions that we need to put out.”