There’s an outbreak of canine flu. What do we do?

A bark, cough, or even petting your dog could spread infection. 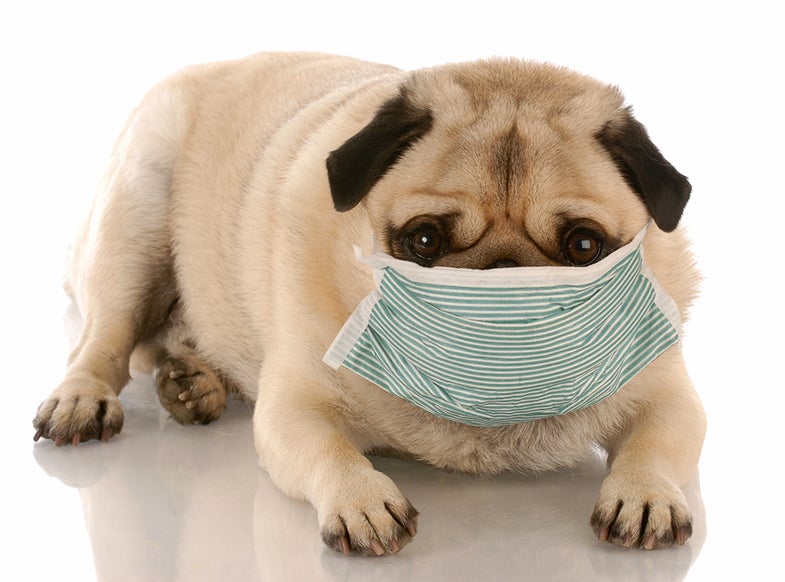 Is your dog coughing? Sneezing? Nose a little wetter than normal? Experiencing a lag in wag? Yes, just like you, your dog can get the flu. And at the rate a new strain of canine influenza is swarming the country, nowhere is safe for poor Fido. But while it’s important to stay alert for symptoms, there’s no need to fear for the life of your pup.

An outbreak of the highly contagious canine influenza virus H3N2 has now hit New York, with 91 cases recorded since April 30, according to data from diagnostic lab IDEXX. Earlier this year, H3N2 infected 520 dogs across California. More than 2,600 of our furry friends have come down with the flu in 2018, which Edward Dubovi, professor of population medicine and diagnostic sciences at Cornell University College of Veterinary Medicine, says is a gross underestimate.

“I guarantee the number is 10 times higher than that,” says Dubovi. “The problem is we have no regulations on the transportation of dogs. There’s no quarantine to see what infectious diseases they could be carrying when rescue groups bring these dogs in.”

The first incidence of H3N2 in the U.S. infected 1,100 dogs, after a rescue from Korea with the virus landed in Chicago. Dubovi says he believes the same thing could be happening now in New York. And in major metropolises—where even your pet dog has a bustling social life—vets say it’s critical for owners to recognize the warning signs of this quick-spreading canine contagion.

“It starts out with mild cough, and progresses to a more consistent cough,” says vet Yasmin Mortsakis, who runs New York Veterinary Practice. “Many dogs will have a fever, be lethargic, and will not want to eat. And just because a dog doesn’t show signs doesn’t mean they don’t have it.”

It’s unlikely the outbreak will escalate to a dog zombie apocalypse, but Mortsakis says it’s important for dog owners to take precautions. If your pup seems sick, head to the vet.

It started with one dog, then two, then….1,100. H3N2, an avian virus originating in southeastern Asia, made its way over to Chicago from Korea on whichever unlucky rescue dog served as patient zero. In just a matter of months, vet clinics were overrun with hundreds of sneezing, sickly canines. Dog parks, boarding facilities, and doggie daycare centers were forced to close to prevent the spread of infection.

“It was hitting condensed areas in Chicago where dogs share common spaces,” says Steve Dale, a certified animal behavior consultant, who tried to help vets and pet owners during the 2015 outbreak in Chicago. “We thought it was H3N8, the only other known dog flu strain in the U.S., but it seemed like an exaggerated version of it. We didn’t know what was going on.”

H3N8, the first strain of dog flu ever identified, is an equine influenza that was discovered after eight greyhounds died at a racing facility in Florida in 2004. Over the next year, H3N8 spread swiftly, infecting more than 20,000 dogs at racetracks all over the U.S. Dubovi says the H3N2 virus differs not only in its origins, but also in how contagious and long lasting it is.

“This virus gets into the system and creates serious problems as it spreads throughout the country,” he says. “It’s cost American dog owners millions of dollars, not to mention vet costs, vaccines, cancelled dog shows—a whole host of economic hits.”

How serious is it?

Because canine influenza is so underreported—many dogs don’t exhibits symptoms, leaving owners blissfully unaware their pet is surreptitiously spreading Asian bird flu —it’s difficult to determine a fatality rate for H3N2. The good news? Vets like Mortsakis say it’s unlikely the virus itself will kill. The bad news? H3N2 can make dogs more susceptible to other serious respiratory infections like pneumonia, which can lead to hospitalization or death.

“Right now in our clinic, we’ve had a few dogs that have progressed to pneumonia, and so far all of them have recovered,” she says. “But I would say we’re kind of at the beginning of this in New York City, and so unfortunately I would expect there will probably be some deaths.”

How do I keep my dog from getting sick?

Your dog can’t get you sick, but canine influenza is extremely contagious amongst other dogs. One innocent butt sniff, and your plump beagle Winston is H3N2-positive. Because this strain of flu is relatively new and dogs have yet to build up an immunity to it, all tailwaggers exposed to the virus will contract it, according to the American Veterinary Medical Association (AVMA).

“Even if a sick dog barks or coughs, it can infect another dog,” says Michael San Filippo, AVMA senior media relations specialist. “If you’re playing catch, the virus can get on our hand and you can carry it on your hand for another 12 hours. It lasts even longer on clothes.”

That makes all your dog’s favorite things—the dog park, tennis balls, the crotch of your jeans—a danger zone. And while 20 percent of dogs with the flu won’t exhibit symptoms, they still shed the virus, making them equally as contagious as a coughing Corgi.

And don’t let your dog cough on your cat either; in 2016, a small group of cats was also reported to have come down with the flu.

Just like the human flu, the best way to prevent infection is to get your pup vaccinated. There are vaccines available for both the H3N8 and H3N2 virus, and range in cost (usually between $25 and $60, depending on the vet clinic).

What do I do if my dog is infected?

Once your dog is infected, there’s not much you can do except wait it out. Symptoms can include coughing, sneezing, nasal discharge, fever, lethargy, lack of appetite, and vomiting. Unfortunately, the only way to tell if a dog has a fever is a thermometer up the pooper. Normal temperatures for dogs are around 102 degrees Fahrenheit—anything higher may indicate the flu. Symptoms usually last for two to three weeks, and dogs can shed the virus for up to 28 days.

Even if H3N2 isn’t deadly, Mortsakis says it’s important for vets to see all sick pets to be seen so they can rule out other illnesses and test for canine influenza. Because H3N2 is viral, sick dogs can’t be treated with antibiotics, but sometimes vets will give dogs a round of medicine to prevent secondary infections. And when your dog is under the weather, do as humans do: rest, drink fluids (water, no chicken noodle soup for Spot) and put playtime with other dogs on hold.

Here are some quick tips to keep your dog safe from canine influenza: