If Cats Could Speak Human, What Would They Say?

The attempt to translate cat behavior and sounds 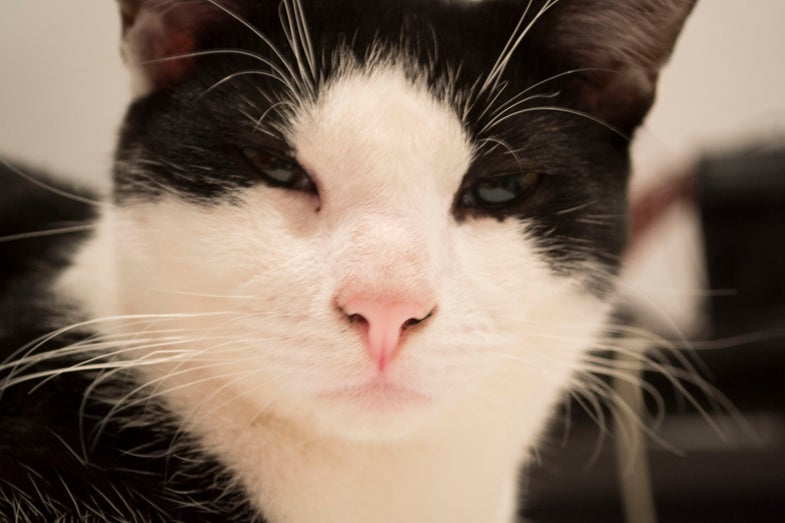 Chelsey Coombs doesn’t understand her cats. Her 18-month-old male tuxedo cat, Creature, “follows you into the bathroom—you can take a bath or a shower and he just sits there and watches,” she says. He jumps around a lot, meowing insistently whenever a door is closed. While Creature is too invasive, her year-old female tortoiseshell cat, Aurelia, is much more timid: “She rarely ventures outside my room,” Coombs says, “She will try to go up to people but when they try to touch her she runs away.” Sometimes Aurelia drags her owner’s clothes into her litter box or food bowl, much to Coombs’ chagrin.

Many cat owners have similar stories of bizarre feline behavior. So it’s only natural that frustrated cat enthusiasts might try to create a high-tech solution to better understand their pets.

In 2003, Japanese toy company Takara Tomy released a handheld gadget called the Meowlingual Cat Translation Device. Equipped with a microphone, the device can purportedly interpret over 200 words from “cat chat” to Japanese, and glean 21 distinct emotions from a cat’s movements and behavior. More recently, several smartphone apps have popped up, claiming to help pet owners better understand their cats’ feelings by translating their hisses and meows.

Cat researchers are skeptical that these techy translators work as their manufacturers claim. The key to understanding our feline companions, they say, lies in a better comprehension of their personality traits that make them the temperamental creatures we know and love.

“I don’t think anyone fully understands cats, but everyone seems to be fascinated by what they are doing,” says Kurt Kotrschal, the head of the Konrad Lorenz Research Center, which focuses on animal behavioral research, at the University of Vienna in Austria.

Most people would say that dogs are easier to understand than cats (although Takara Tomy also sells the Bowlingual translator). This is because, inherently, dogs and cats socialize differently, Kotrschal says. Dogs are descended from wolves, which conform to each other in packs, cooperatively hunting and raising their young. So when he lives with a person, a dog’s first inclination is to conform his behavior to his owner. “Cats not are less socially intelligent, but their social lives seem to be more varied,” Kotrschal says. Cats are equally happy living in packs or a more solitary existence, so whether or not they conform to their owner’s behavior comes down to how much they like their owners.

Because cats tend to be more individualistic and don’t aim to please, researchers have been stymied for decades as they tried to do various laboratory tests with the persnickety kitties. “If you try to do standardized cognition tests, [cats] do not want to participate, they refuse to conform,” Kotrschal says. Even with studies of domestic cats in their homes, the researchers had no guarantee that the test subject would even “feel” like hanging out, while their canine counterparts can be reliably commanded to sit and stay. But fascination with cats has grown over the past 25 years, and more researchers have devoted their energy to unraveling the mysterious felines, according to Dennis Turner, the director of the Institute for Applied Ethology and Animal Psychology in Hirzel, Switzerland. Now, researchers understand more about cats’ behavior—and their relationship to people—than they do even about dogs, he says.

Cats have their own way of expressing themselves, and learning to read their cues takes time. “The way cats communicate their emotions, often with movements of the ears and tail, is pretty universal—you can generalize from one cat to the next,” Kotrschal says. Cats also make about 10 different vocalizations, Turner agrees, but we still don’t understand them perfectly; many of the sounds are unique to each individual cat, and researchers don’t understand even what a purr means.

Because not all cat sounds are universal, cat lovers should be wary of any device that claims to translate them, Kotrschal says. “If it’s basic vocalizations, it could be kind of okay, but sometimes cat behavior is not so easy to predict,” he adds. But a gadget that translates very basic cat vocalizations to human speech might actually work.

Turner isn’t convinced. “I don’t think something like this would ever work,” he says, unless some very qualified cat researchers helped develop the device. Cats are very expressive creatures, he says, and if owners spend enough time with them and learn their unique vocalizations and body language, they should be able to understand their pets without a gadget.

“I don’t think anyone fully understands cats, but everyone seems to be fascinated by what they are doing.”

If offered a cat communication device guaranteed to work, Coombs would want to decipher the motivations behind her cats’ quirky behaviors. But Turner says that owners themselves may be unwittingly encouraging their cats’ idiosyncratic behaviors that they find most beguiling. “If the cat jumps on the toilet, the owner might actually scream for fear [the cat] might jump in,” Turner says. “But if the cat is seeking additional attention, that might be a reward—they got it, in a way.”

Although cat research has progressed since the Meowlingual translator first hit the market, it’s not quite advanced enough yet to reliably interpret cats’ emotions. Turner and Kotrschal agree that future research into cat communication will focus on their cognitive abilities—“Do they think? What do they think? What kind of decisions do they make?” Turner asks. Kotrschal also suspects that future work will answer more questions about how they socialize and attach to their owners.

But for now, researchers and cat owners alike face similar issues as they try to wrangle their reluctant felines. “They’re very stubborn and hard to understand,” Coombs says. Nonetheless, if she were given a way to verbally communicate with her cats, “I think I would tell them that I really love them.”