The 50th anniversary of Earth Day was supposed to be one of the biggest US climate marches yet. Now organizers are scrambling to find ways to protest online. 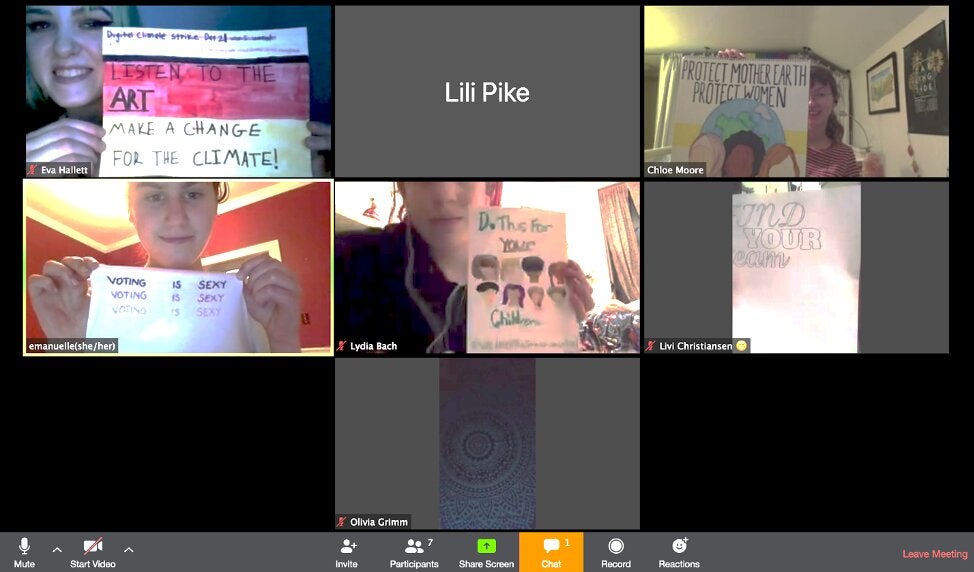 Late last month, climate activist Shiv Soin was scheduled to sit down with the New York City Police Department to negotiate permits for a protest that would pack downtown streets on April 22—the 50th anniversary of Earth Day. Now, along with most of the region’s residents, the college sophomore is confined at home in New Jersey.

With the coronavirus spreading rapidly across the country, the coalition of youth climate organizers preparing for Earth Day decided that their nationwide marches could not go forward as planned. After months of preparation, Soin, who helped organize New York’s climate strikes last year, is now one of a large group of activists adapting their original agenda to the digital realm.

“It has been upsetting to have these plans canceled,” he admits. “But it is exciting to learn how to really harness this digital space.”

Rather than cancel their planned Earth Day mobilization, organizers announced late last month that they would convert the events into a three-day livestream dubbed “Earth Day Live”. The first day will feature digital strikes that will attempt to capture the spirit of a protest. “What we are trying to do is put together some sort of digital mosaic that shows how many people are really together,” Soin says. During the following days, activists will be calling for consumer boycotts of financial-services companies that invest in fossil fuels and organizing voter drives online instead of knocking on doors.

Organizers are already adapting to this new reality. On a Saturday night in early April, the Future Coalition, which coordinates the youth climate movement, converted a Zoom call into a public art studio. Accompanied by a soundtrack of mellow folk music, seven young activists created posters together online. Zoom faltered—one participant reported a piercing reverb—so the music was cut, but the artists emerged from the session armed with new posters to take to the digital streets. Since social distancing began, youth activists have been posting a selfie with a poster every Friday in place of an ongoing worldwide climate strike where students skip school once a week to protest. They plan to upload similar posts on Earth Day.

“We are really looking at this as an opportunity to reimagine what a social movement can look like in the digital age,” Katie Eder, the 20-year-old director of the Future Coalition, said on a press call, pointing to Live Aid as a source of inspiration. Held in 1985, Live Aid was a charity concert that raised over $100 million for famine relief in Africa by broadcasting top bands across the globe. Taking a cue, Earth Day Live will also feature live performances.

While some activists are embracing the opportunity to innovate stronger digital campaigns, academic experts say online action is unlikely to be as visible or powerful as made-for-television scenes of seas of people flooding downtown Manhattan and other cities. They also warn that online organizing favors the wealthy, potentially hamstringing the climate movement’s efforts to broaden its support and spur youth voter turnout in a critical election year.

At last September’s climate strikes, most of the participants came from well-educated families, according to research by University of Maryland sociologist Dana Fisher. “So, if we are now transitioning to something that is purely digital, there is even more of a chance of it continuing to be trapped not only in the echo chamber in terms of sympathizers, because that’s how social media works,” says Fisher, “but also in terms of it not reaching out to frontline communities and people who are less highly educated or come from more blue collar backgrounds.”

Climate activists had envisioned April 22 as a crucial opportunity to break out that echo chamber. The protest was to be their biggest show of strength yet, honoring Earth Day—a seminal moment for the environmental movement that helped establish the Environmental Protection Agency and a series of bedrock pollution laws. “We were going to show those people from 1970 that we could put more than the 20 million people they had in the streets out on the streets,” said author and environmental activist Bill McKibben during a press briefing.

The climate movement had been surging over the last year, spurred by 17-year-old Swedish activist Greta Thunberg’s call for students to skip school and protest on Fridays. Over one million people participated in the first global climate school strike in March 2019, according to the organizers. The momentum carried through to major protests in the fall: During the climate strike in September, an estimated 4 million people turned out across the world, making it the largest climate protest in history. In New York City alone, 250,000 people flowed down Wall Street to the tip of Manhattan.

Organizers acknowledge that shifting their strategies online poses serious challenges. From the 2018 youth-led Sunrise movement’s sit-in at Nancy Pelosi’s office to demand a Green New Deal to 2019’s strikes, the climate movement’s power has grown through its occupation of physical space.

“We had so much energy, so much excitement, and so much momentum coming out of the 20th—I don’t know if it’s going to be the same,” Soin says, referring to the September 20 strike he helped organize in New York City. “Obviously, though, we are doing the best we can,” he says, emphasizing that safety is their priority.

One of the major issues the organizers are working through is basic infrastructure—19 million Americans still lack access to high-speed internet. Many of those on the other side of the digital divide are in marginalized communities that climate activists are especially eager to reach.

Along with the challenge of ensuring that the digital Earth Day strikes don’t exclude these communities, organizers are also considering how to achieve their broader campaign goals of protesting financial institutions and politicians online. Originally, the two days following the march were supposed to be dedicated to those goals.

Bill McKibben and other activists, under the umbrella of the Stop the Money Pipeline campaign, had planned nationwide sit-ins and protests targeting Chase Bank, BlackRock, and Liberty Mutual’s investments in fossil fuels—tactics they had been deploying at smaller scales in recent months.

“There are a variety of ways that people can continue this movement to keep up the pressure even if, for right now, we need to forego any plans around big offline demonstrations,” says Ben Cushing, a campaigner at the Sierra Club and a member of the Stop the Money Campaign coalition.

For instance, instead of occupying Chase Bank locations in person, the group is directing activists to “travel” to the bank’s branch offices on Google Maps and leave thousands of reviews about its record of investing in fossil fuels.

Perhaps the activists’ biggest challenge is replicating their political campaigns online. The Sunrise movement had intended to use their day of action to do a large-scale voter registration drive. “Their plan was to broaden and bring people out for Earth Day,” says Maryland’s Fisher, “then also to broaden in terms of their work—transitioning toward mobilizing broader communities for the election in 2020 in November.”

Now, climate organizers will be limited to online tools, phone banking, and texting, which Fisher says are likely to be less effective than in-person outreach like door knocking.

If political organizing has to take place online over the coming months, the environment is likely to favor conservatives, according to Jen Schradie, a sociologist at Sciences Po in Paris who studies digital activism. In her research on the digital divide, Schradie found that better-funded and more hierarchical groups, which tend to be conservative, have been more successful at online activism than liberal groups, which tend to have less money and more informal “horizontal” organizational structures.

“We like to think that in the digital era there is more horizontalism, and anyone with a computer or a cell phone can not only be involved but can enable some video or photo to go viral and it just happens,” says Schradie. But in actuality, she adds, “it takes work. There is work of digital activism, work of digital democracy”—and that takes money.

Sunrise movement organizers are sober about the likelihood that their organizing will be hampered for many months. On a press call, Naina Agrawal-Hardin, a Sunrise organizer said, “It is entirely possible that the virus will affect us all year and that is something we are going to have to deal with.”

The climate movement does have one clear advantage, though: its youth. According to Fisher, the median age of participants was 18 at the spring 2019 U.S. school strikes and 22 at the September strike in Washington D.C.

“It’s unclear,” Fisher says, “but there is a lot of evidence to show that these young people are extremely digitally savvy and will figure out meaningful ways to use the technology to achieve their goals.”

This article is provided by Scienceline, a project of New York University’s Science, Health, and Environmental Reporting Program.