Blue-throated macaws are making a slow, but hopeful, comeback

The Asociación Armonía and the Rainforest Trust report progress in protecting one of the world's rarest birds. 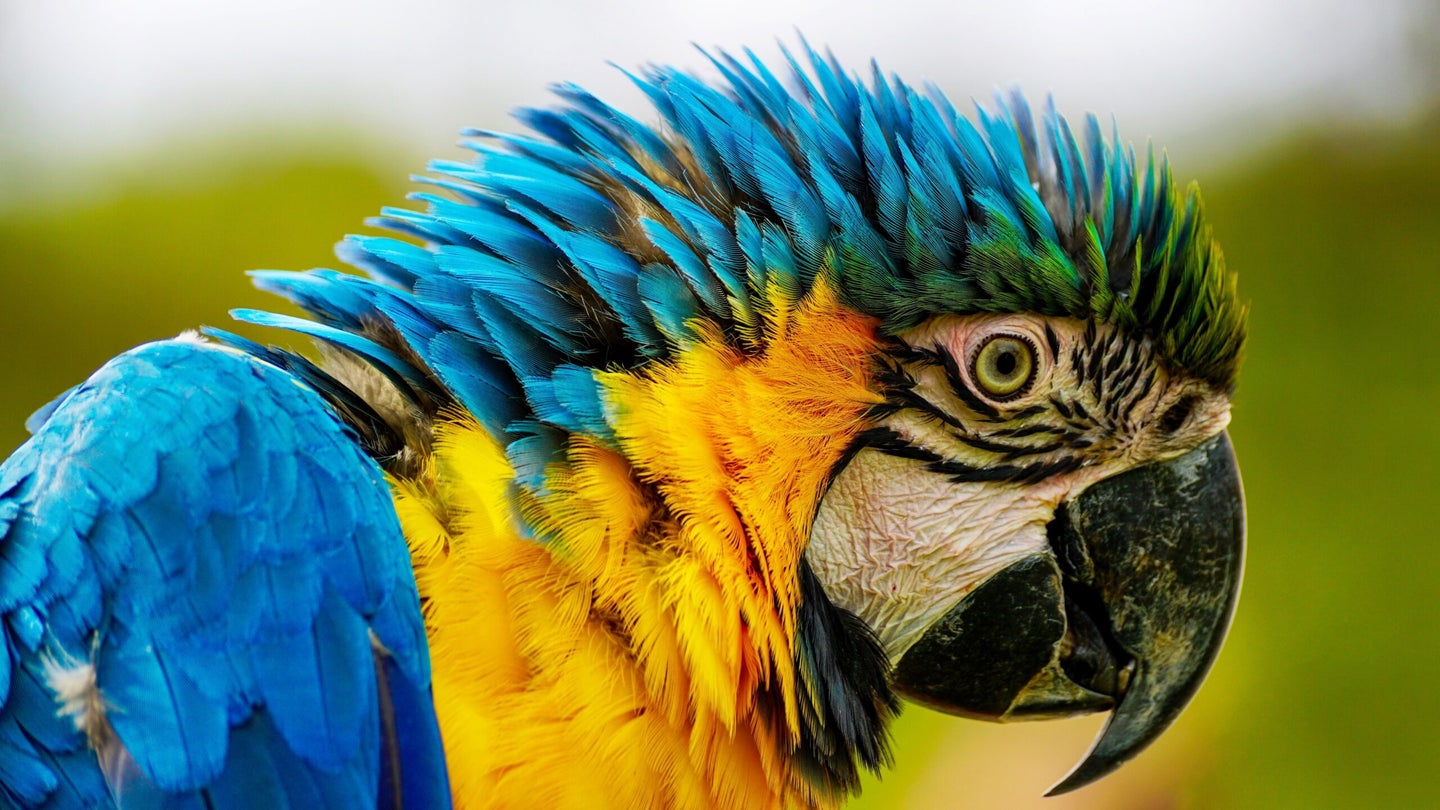 A new report from The Rainforest Trust and Asociación Armonía (Rainforest Trust’s partner in Bolivia) shows that conservation efforts to protect the habitat of one of the world’s most beloved and endangered birds may be working. Once thought to be extinct, a population of nearly 50 blue-throated macaws was rediscovered in northeastern Bolivia in 1992, and thanks to conservation efforts, there are an estimated 200-300 of them living in the wild today.

As this year’s nesting season for the blue-throated Macaw nesting season comes to an end, the Laney Rickman Reserve reports 16 nesting attempts in the 100 nest boxes monitored by the park’s rangers. The nesting resulting in eight chicks successfully fledging—a significant number nt for conservation of the species, according to the Rainforest Trust. The Laney Rickman Reserve was created in 2018 in the southeast portion of the Beni Savanna as an effort to protect the largest known group of nesting critically endangered Blue-throated Macaws in the world.

As of last year, Asociación Armonía has successfully fledged 105 Blue-throated Macaw chicks since the inception of its nesting box program in 2005.

[Related: Monarch butterflies show hints of a comeback out West, but experts are cautious.]

“Rainforest Trust and our donors care about all endangered birds–indeed all endangered species. But Blue Throated Macaws are special–spectacular, brilliant, social. Our world would be vastly impoverished without them,” Rainforest Trust CEO James Deutsch said in a press release. “That’s why we are so privileged to support Asociación Armonía in their highly professional and successful efforts to pull this species back from the brink.”

The gold and blue parrot is one of the rarest birds in the world (it’s found only in Bolivia’s Beni Davanna) and highly intelligent. Despite these recent successes, they are still critically endangered due to habitat loss and the illegal pet trade.

[Related: “We don’t have a full picture of the planet’s shrinking biodiversity. Here’s why.”]

The reserve is located in the Beni Savanna, in the lowlands of the southwestern Amazon River basin in northern Bolivia. The area is also called the Llanos de Moxos and is one of only two unique Bolivian endemic ecosystems. It’s made up of natural savannas, forest islands with motacú and totai palm trees, dry forest patches, and river edge Amazonian forests. It is home to 146 mammal species, including giant anteater, jaguar, and maned wolf, and hundreds of species of birds.

A 2017 study published in Scientific Reports finds that three macaw species (including the blue-throated macaw) are influential seed dispersers in the ecosystem, primarily for the Motacú palm. The tree is also their preferred nesting tree and preferred food and need seed dispersal in order to thrive. 2017 also saw a record number of macaw sightings (155 individual sightings) at the Barbara Azul Nature Reserve in Bolivia, according to Asociación Armonía.

Despite the success, there are still major hurdles in protecting the world’s critically endangered species. A study published earlier this month in the journal Current Biology, finds that predicted loss of birds species with striking and extreme traits will likely face extinction first, taking with them unique traits in evolutionary history. Some estimate that there has been a 68 percent decline in species population and size over the past 52 years, with climate change threatening even greater biodiversity loss.