How to make sure your leech bite doesn’t kill you

You don’t know where that worm’s been … or where it will end up. 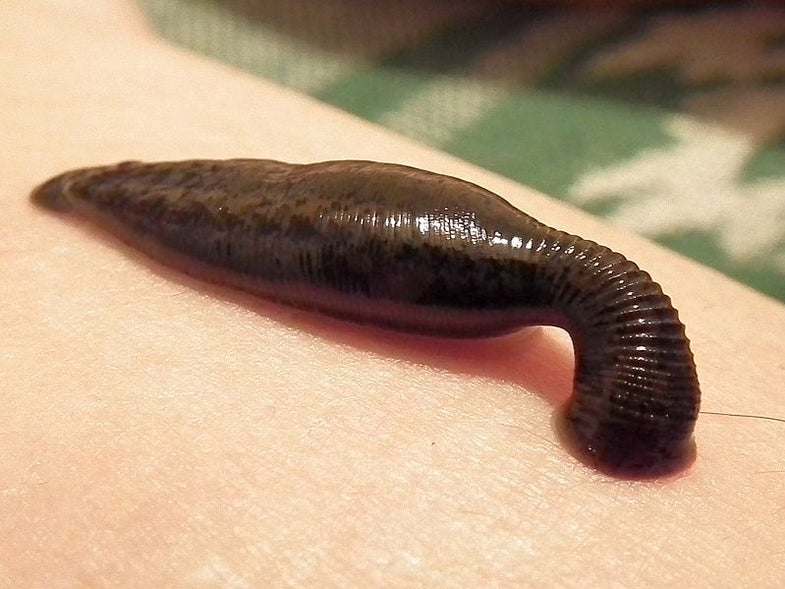 This post has been updated. It was originally published on December 13, 2017.

Several years ago, emergency physician Jeremy Joslin found himself overseeing an ultramarathon in the backcountry of Cambodia. Once they’d finished the event, many of the athletes wanted to cool off and noticed an inviting stream nearby.

“After a few minutes, the screams started,” says Joslin, who is based at SUNY Upstate Medical University in Syracuse. It was not long before people began hurrying back to camp—along with the multiple leeches that had become attached to their bodies. The next few days were filled with bandage changes and mild bleeding.

Most leech encounters play out similarly. Finding one of these bloodthirsty worms on your body can be a disturbing experience, but it’s usually not a medical emergency.

Usually. Every once in awhile, leech bites can cause some serious and gruesome complications. Here’s what can happen when one of these little suckers comes in contact with you, and what you can do about it.

Not all leeches are bloodsuckers

There are actually plenty of leech species out there that don’t drink blood. However, those that do dine on people dwell both in water and on land. Aquatic leeches are found around the world, while land leeches are common in Southeast Asia, the Pacific Islands, the Indian subcontinent, and South America.

Leeches sense their prey in a few ways. They are attracted to shadows and disturbances in the water, body heat, and secretions like oil and sweat. Terrestrial leeches, which often perch on foliage while awaiting a meal, also respond to the carbon dioxide you exhale, says Sebastian Kvist, associate curator of invertebrates at the Royal Ontario Museum in Toronto.

“Anyone that has performed fieldwork in the tropics of Southeast Asia can attest to the aggressiveness of these leeches,” Kvist said in an email. “They need to be able to feed on anything that crosses their path, and they are very active hunters.”

Leeches come equipped with two suckers, one of which surrounds their three-jawed mouths. Once a leech fastens onto you, it encourages your blood to keep flowing using anticoagulants in its saliva. Some common aquatic leeches can guzzle nearly 10 times their weight in blood during a single feeding, filling their bellies for a year or more.

There are a few situations where leeches might be attached to your body because your doctor put them there. The infamous medicinal leech (Hirudo medicinalis) was once a popular tool for bloodletting. “Europeans were so enamored with the use of medicinal leeches in the 17th and 18th centuries that they depleted the supply,” Joslin and his colleagues wrote October 10 in the journal Wilderness & Environmental Medicine in a paper on the history and perils of leech attachment.

Today, there are very few illnesses for which bloodletting is considered a good treatment. However, leeches have made a name for themselves in reconstructive surgery by improving blood flow in damaged veins.

That depends on how many leeches are feasting on you, where they are located, and how much you’ve pissed them off.

Leeches typically feed for about 20 or 30 minutes before dropping off your body. Bleeding from a leech bite lasts 10 hours on average, but sometimes continues for days. “It can range anywhere from inconvenient all the way to medically severe,” Joslin says.

In most cases, if you are healthy and get a single leech bite you’ll probably just have some bleeding. But if you are beset by many leeches at once, the consequences can be more serious. A man in Turkey once showed up in the emergency room with anemia and excessive bleeding from 130 leech bites. The anticoagulants in the leeches’ saliva had impaired his blood’s ability to clot enough to be life threatening.

[Related: The best first aid kits for home and on the go]

Leeches can also spread disease. “Leeches don’t have an immune system that sterilizes their gut contents like we do,” Joslin says. “So if a leech has bacteria in its gut and it attaches to you and there’s any regurgitation of blood from their gut onto your wound, that can transmit infection.”

A leech might puke up germ-filled blood if you try to remove it by squeezing, burning, or other violent means. Medicinal leeches may pass on ailments like syphilis and erysipelas, a bacterial infection of the skin.

“If you get wild-caught leeches, you don’t know what other animal or human that leech has attached to in the past and may have picked up some bacteria, virus, or parasites from,” Joslin says.

Scientists have found HIV and hepatitis B viruses in wild leeches in Africa. “It wasn’t a confirmed case of transmission, but if they have these viruses in their gut then it stands to reason that they could be transmitted,” Joslin says.

And these bloodsuckers have another nefarious habit. Most of the time, leeches will fasten onto your exposed skin. But occasionally, a leech will pass through one of the body’s orifices and attach internally. Leeches have made their way into people’s eyes, ears, noses, throats, urethras, bladders, rectums, vaginas, and stomachs.

And according to Kvist, this is no accident. When a leech does invade a person’s body, it usually belongs to the Praobdellidae family. These leeches are known for feeding through mucous membranes. In other words: they want to be inside you. “The rest of the skin is much more unappealing to them,” Kvist says, “although they probably would feed on your leg, if they were starved.”

A leech can stay in your body for days or weeks. There are a few clues that a leech might be inside you, depending on where it’s ended up. Unusual bleeding from the orifice in question is one. Leeches can also cause fever, vomiting, trouble urinating, and “a sensation of foreign body movement,” Joslin and his team write. If the leech is nestled in your throat, it can cause difficulty breathing, hoarseness, or voice changes.

“If you get a leech in a body cavity or on your eyeball or something like that, even one leech can cause a pretty big problem,” Joslin says.

How to remove a leech safely

If you find a leech attached to your body, you should check to make sure there are no others.

You’ll want to remove the leech gently to avoid regurgitation. Joslin recommends using your fingernail or the edge of a knife or credit card to get under the mouthpiece and break its suction. If you can’t reach the leech because it’s in your mouth or esophagus, you can try gargling saltwater. “Saltwater is able to sufficiently irritate the leech and cause it to remove itself without being so noxious as to cause regurgitation,” Joslin says.

Then wash the area with soap and water and bandage it. You probably won’t need to take antibiotics to prevent an infection, Joslin says.

In very rare cases, though, leech bites can be lethal. A person could bleed to death if they sustained a massive number of leech bites, or die from a blood infection, Joslin says. In 1799, soldiers in Napoleon’s army accidentally drank water with leeches in it on their march across Egypt. Some of these men suffocated to death as the bloated leeches blocked their airways.

There’s not a lot you can do to keep leeches at bay, especially those that live on land. “They get into your clothing easily and it’s difficult to fully keep them from attaching to your skin,” Kvist says.

If you are traveling over leech-infested terrain, you can try wearing long, tucked-in clothing. There’s also some evidence that insect repellents containing the ingredients DEET or DEPA can discourage leeches.

[Related: Catnip and grapefruit are ushering in a new era of insect repellants]

Unfortunately, some of the most tempting spots to swim and explore the outdoors are also prime leech habitat. That doesn’t mean you should never set food in a lake or pond again, though.

“Having an understanding of how to remove them, what to watch out for, and how to treat it when it does happen is even better than trying to simply avoid places where leeches might live,” Joslin says.