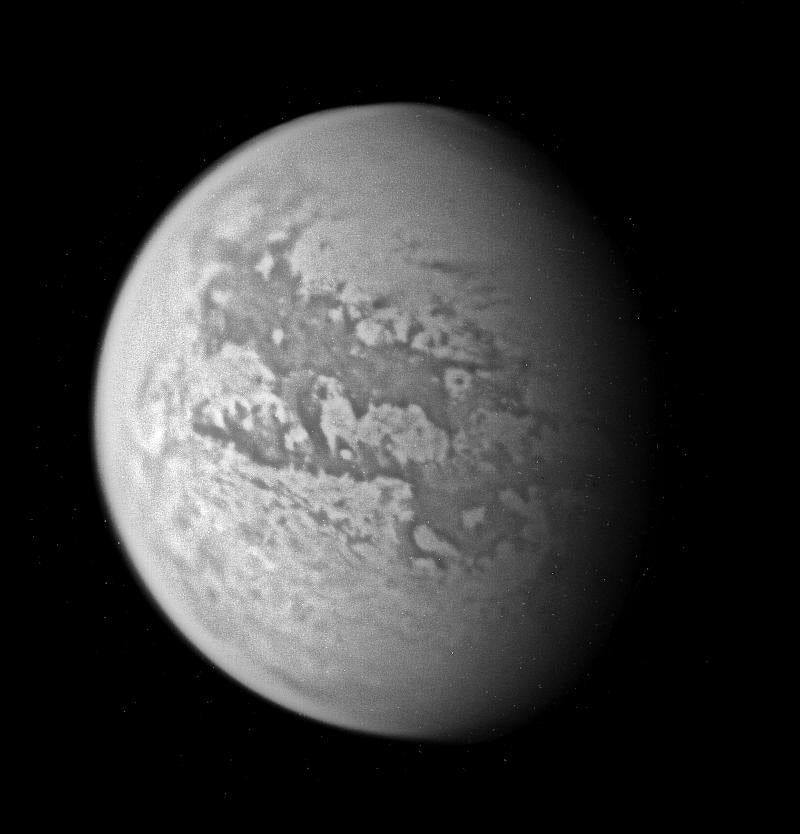 A picture of Titan taken by the Cassini spacecraft. Titan appears hazy thanks to its thick atmosphere. NASA/JPL/Space Science Institute
SHARE

Imagine you’re at a beach, standing near the dunes and looking out on a peaceful sea. The dry sand squishes through your toes, and you decide to build a sandcastle near the shore, without using any liquid to bind the grains together. A few weeks later, you wander back the same way, and your sandcastle is still there.

Magic? No, you’re just on Saturn’s moon Titan, where the seas are filled with hydrocarbons and the sand is electrically charged.

In a study published Monday in Nature Geoscience, planetary scientists found that the grains of sand that make up dune-like structures on Titan might be charging each other up as they bump into each other, becoming sticky with static electricity.

They took a sand-like mixture of two hydrocarbons—naphthalene and biphenyl—that have been identified on Titan’s surface, placed the mixture in a tube that recreated the atmospheric conditions of Titan (98% nitrogen) and shook it up, letting the sand grains bump and grind for 20 minutes. When the researchers poured them out of the tube, many of the grains were electrically charged, and a small amount stuck to the interior of the tube.

Here on Earth, naphthalene is an active ingredient in mothballs, and biphenyl is known to cause cancer in rats. On Titan, the compounds would still likely be bad for you. But, at least in theory, they’d also be a lot of fun to play with.

“If you grabbed piles of grains and built a sand castle on Titan, it would perhaps stay together for weeks due to their electrostatic properties,” Josef Dufek, a co-author of the study said in a statement. “Any spacecraft that lands in regions of granular material on Titan is going to have a tough time staying clean. Think of putting a cat in a box of packing peanuts.”

If you’ve never put your cat in a box of packing peanuts, the aftermath looks something like this:

In other words, the charged sand grains—or even clumps of sand—might stick annoyingly to anything that lands, unless we’ve prepped our spacecraft to resist static cling.

The research doesn’t just provide a cleaning outline for future missions, or create dreams of building the best sandcastles the solar system has ever known. It also helps explain why Titan looks the way that it does today.

The study might help explain why dune structures observed on Titan don’t follow the same rules as Earthly dunes: they face the wrong way, given the presumed direction of the prevailing winds, and they seem to stubbornly stay in place.

Earth’s dunes, of course, tend to exist in a constant state of motion. Our planet’s sand is primarily made of silica, and can get blown along by the wind. Sometimes the bumping together of sand grains can create an electric charge, but not quite enough to let them cling together. But researchers think that the electrostatic forces they’ve observed in the pseudo-Titan sand grains could stay in place for long periods of time, waiting for a strong enough wind to come by and shape them. The grains themselves could potentially hold a charge for weeks or months.

When the study authors ran the same experiment with boring Earth sand in boring Earth’s atmosphere, the grains remained resolutely un-sticky, and slid straight out of the tube.

“Titan’s extreme physical environment requires scientists to think differently about what we’ve learned of Earth’s granular dynamics,” Dufek said. “Landforms are influenced by forces that aren’t intuitive to us because those forces aren’t so important on Earth. Titan is a strange, electrostatically sticky world.”