Oceans on Europa Have Enough Oxygen to Support Space Fish 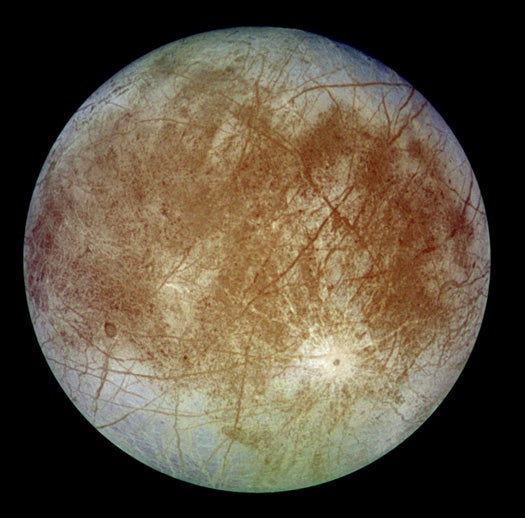 Thanks to a surface covered in liquid water, Jupiter’s moon Europa serves as the prime suspect for bodies in our solar system harboring extraterrestrial life. For the most part though, speculation has assumed the life on Europa would be microscopic, similar to the chemical and rock-eating microbes found atop undersea volcanic vents on Earth. However, a new study estimates the level of oxygen in Europa’s seas may be high enough to support fish-sized life. Hello, alien sushi.

At this month’s meeting of the American Astronomical Society’s Division for Planetary Sciences, University of Arizona professor of planetary science Richard Greenberg presented his new model for Europa’s ocean. In this model, the sea contains enough oxygen for three tons of fish-sized creatures. And while that number seems fairly low on a planet where a single boat could haul a multi-ton catch, it’s worth noting that Europa is over 100 times smaller than Earth.

Greenberg believes that tides in Europa’s ocean, caused by the gravitational pull of Jupiter, have steadily increased the levels of oxygen in the water. This gradual theory contrasts with an older theory which assumed the oxygen levels in Europa’s oceans stayed fairly constant. A steady increase in oxygen is better for the evolution of life, and indeed Earth itself saw a slow build up of oxygen during the early days of life.

Timothy Shank, a deep-sea molecular ecologist, told NatGeo he’d “be shocked” to learn that Europa did not harbor life.

Even if probes manage to confirm Greenberg’s theory, we still won’t be able to deduce the size of Europa’s denizens, or even if the moon hosts any life at all. For that, we would need to actually penetrate the ice and look around the moon’s briny deep. Well, that, or we could just equip a surface rover with a fishing pole. What kind of bait do you use to catch aliens, anyways?