Ask Anything: What Would People Eat In A Permanent Space Colony?

Once settled on another planet, colonists would likely start with hydroponic farming, using small-stature or dwarf cultivars that can be... 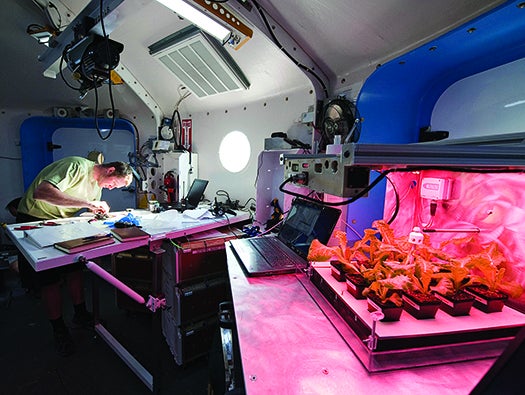 Researchers at the Hawaii Space Exploration Analog and Simulation spent 120 days living as they might on Mars. NASA
SHARE

Once settled on another planet, colonists would likely start with hydroponic farming, using small-stature or dwarf cultivars that can be tightly packed together. It would make the most sense to plant fast-cycle salad crops first, says Jean Hunter, a professor at Cornell who studies food-processing and waste-management systems for long-term living away from Earth. That means lettuce, radishes, carrots, tomatoes, cucumbers, and other veggies. Later on, the colonists would move to carbohydrate-heavy crops like sweet potatoes, rice, and wheat, and after that they might plant protein and oil-rich crops, such as soybeans and peanuts.

Consequently, the settlers would end up on a vegan diet, more or less. They could try to cultivate insects, guinea pigs, or other small animals, but caring for these would add to their already enormous workload. “Small-scale agriculture is notoriously inefficient,” Hunter warns. “I worry about the colonists underestimating the amount of human capital needed to grow and process their own food, to the point where everybody becomes a subsistence farmer and they’re toiling all day just to get enough to eat—kind of like our ancestors in America.”

Even if the colonists could figure out a way to grow food for themselves without spending every last minute doing it, and even if they managed to stave off crop disease (which can spread very rapidly in a hydroponic culture), they would still need backup food from home. “For the first four to six months, their crops wouldn’t be ready,” says Hunter. So early arrivals would have to bring a large supply of shelf-stable or prepackaged foods.

Consequently, the settlers would end up on a vegan diet, more or less.

That’s where the development of advanced food technology comes in. Space scientists would need to figure out how to make foods that can last for four or five years inside sealed pouches. Right now, such products rate for less than half that time at most, but new technologies—such as microwave sterilization and high-pressure processing—could extend shelf-life considerably.

What sorts of foods, then, should colonists take with them? At the NASA-funded Hawaii Space Exploration Analog and Simulation, which ended last August, Hunter and her colleagues provided the crew with both prepackaged entrées and basic ingredients with which to prepare their own meals to determine their preference. She found that participants were much less bored by their food when they had a hand in making it, and that turns out to be important: “You can have something that’s very tasty but then you get tired of it really quickly,” says Hunter. “In these situations, that’s actually not as useful as a food that’s just okay but that you will enjoy at its initial level for a long time.”

Ask Us Anything
NASA
Space
food