Neutrinos, the infinitesimally small particles so faint physicists used to call them “the ghost particle,” have driven scientists to construct... 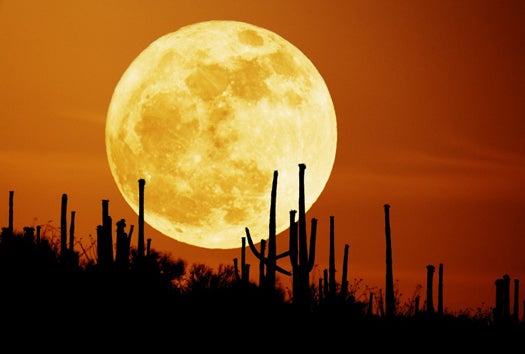 Neutrinos, the infinitesimally small particles so faint physicists used to call them “the ghost particle,” have driven scientists to construct immense underground facilities simply to catch a glimpse of a single one. Now, with even the most massive detectors failing to trap certain high-energy neutrinos, astronomers have turned to a larger filter: the Moon.

Teams of scientists on the supercomputer-linked LOFAR radio telescope in Holland, and on the Very Large Array (VLA) telescope in the U.S. have both turned their attention to the Moon in hopes of recording rare neutrino interactions.

The problem is that neutrinos are so small that 50 trillion neutrinos pass through each person every second without interacting with a single atom in anyone’s body. To study these particles, scientists use giant underground tanks of water as filters, hoping that 2.5 million gallons of water is enough of a barrier to cause a couple of neutrino/molecule interactions.

But for high-energy cosmic ray neutrinos, even those tanks of water aren’t enough.

That’s where the Moon comes in. Mostly uniform, very dense, and far larger than any earthly tank of water, it makes a significantly better testbed: the likelihood of a neutrino interacting with part of the Moon is much greater than the chance of a similar result with even the largest tub of water. When a neutrino does strike part of the Moon, it gives off a nanosecond-long radio-wave burst. By recording those waves, radio telescopes can turn the Moon into the largest neutrino detector in history.

And while neutrinos’ low rate of interaction makes them exceedingly difficult to study, it also means they can travel clear across the galaxy without interruption. Most cosmic rays — charged particles that move at close to the speed of light — become ensnared by magnetic fields during the long journey across the galaxy. But neutrino cosmic rays, which hardly interact with anything, can make the trip unmolested.

The scientists hope that by studying these undisturbed cosmic ray neutrinos, they can learn about the gamma ray bursts and black holes that created them.

Additionally, since the neutrino cosmic rays move far faster than the beams of any man-made particle accelerator, their interactions maybe shed light on some of the smallest constituents of matter as well.