This Chip Can Sift Martian Soil For Alien DNA 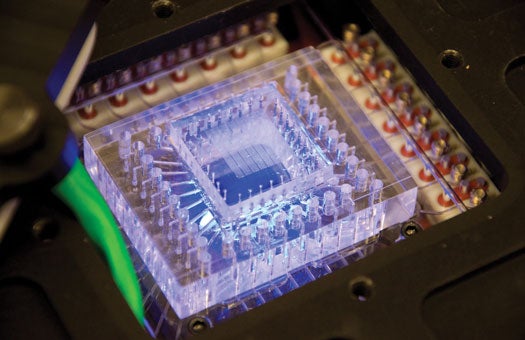 Someday, microfluidics chips like this one might suss out life on Mars. The chip, developed by Gary Ruvkun, a professor of genetics at Harvard University, would ride along on a soil-collecting rover and search for microscopic life within Martian dust.

It will use a combination of buffer solution, detergent and high-frequency sound waves to disrupt the cells, causing any minuscule Martians to release their genetic material. Chemicals in the chip would then amplify the DNA found and label it with fluorescent dyes.

Ruvkun estimates that his team is only 3 percent of the way to designing a device that would be small enough to make the trip to Mars, could sequence DNA, and could withstand cold temperatures and a potentially high-radiation environment. But, ever a fan of percentages, he believes that there’s at least a 50 percent chance they will find something, and if it works, “you bring out the champagne and you toast.”