Pond gunk has never been so fascinating. 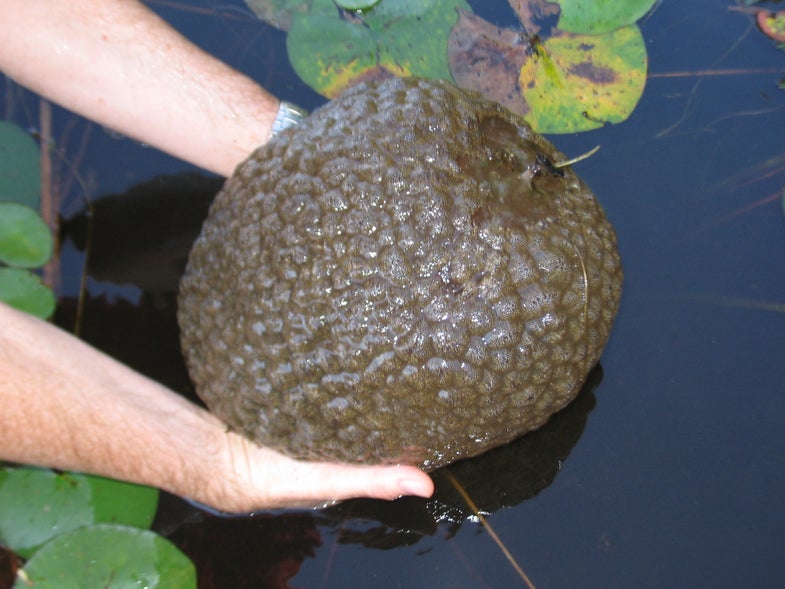 “Dragon boogers” go by many names. “Moss animals,” for one, and “bryozoans,” for another. They’re also known as “ectoprocta,” meaning “anus outside.” If you’re unfamiliar with the phylogeny of aquatic invertebrates, it might seem unnecessary to distinguish creatures with anuses outside from creatures with anuses inside. And yet, it is necessary—which is the beauty of water-dwelling blobs.

See, water allows evolution to do amazing things. Where we landlubbers have to defecate downwards, water-bound creatures are free to spread their waste (and sperm and eggs) wherever they please. Up, down—who cares? It’s all just gonna float around everywhere anyway. This means that sometimes evolution creates an animal that has a large opening, vaguely resembling a hollow anemone, holding both the mouth- and the butt-holes. These are the entoprocta, or anus-insiders.

Volunteers recently found oodles and oodles of these moss animals in Lost Lagoon, which is an entirely real (albeit man-made) lake in Stanley Park, Vancouver. They’ve been described as having the texture of “three-day-old Jello—a bit firm but gelatinous.” Yum!

These creatures are actually clumps of many individual organisms that live together, kind of like a gooey commune, which is more scientifically known as a zooid. Together they can wiggle around using tiny tentacle-y arms called cilia, which they also use to help usher food bits into their mouths. You can watch the park ecology society’s outreach manager pull one out of the murky water in this adorably scored video:

That lump of snot may have been chilling at the bottom of Lost Lagoon for years without being detected. Their lovely brownish-green hue means these creatures blend into the lake, and their vaguely lumpy texture makes them look kind of like frog spawn. More often than not, they go incognito. In fact, scientists originally thought that bryozoans didn’t live west of the Mississippi, but in recent years they’ve shown up in more bodies of water. It’s possible that global warming is helping their case, since they can’t live in liquid much colder than 60 degrees Fahrenheit. But it’s also possible that they’ve just been lying in ponds (though not distributing swords) for years now without anyone noticing.

That would be in keeping with how vexing bryozoans are to biologists in general. They seem to defy classification. In phylogeny, you can usually categorize an organism by its anatomy or its embryonic development. Most animals form their gastrointestinal tract from the endoderm, which is the innermost layer of an embryo. But adult ectoprocts form their guts and all other internal organs from the epidermis and the mesoderm. And that’s only after they go through a larval stage where they destroy all of their internal tissues and create new organs. Most early embryos form a dent in the ball of cells that will become either the anus or the mouth, and are called deuterostomes or protostomes accordingly. Human are, incidentally, deuterostomes, which means we all begins as buttholes. Moss animals also develop a dent, but it then disappears, and a different pore becomes the gut.

Even biochemistry and genetics haven’t entirely clarified how bryozoans are related to everything else. They seem to be close to mollusks and annelids, even though they look much more like coral or polyps.

And so the mystery of the dragon boogers continues. Where did they come from, evolutionarily speaking? Where will they pop up next? The only way to find out is to keep pulling ‘em out of lagoons.