The islands of stinging insects are just the beginning. 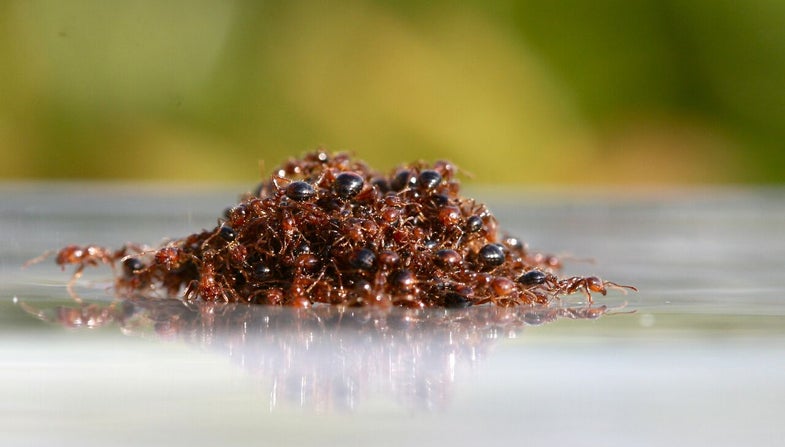 In addition to debris (and alligators), Texans escaping Hurricane Harvey’s floodwaters must watch out for floating balls of fire ants. And the problem won’t go away after the waters subside.

The red imported fire ant evolved in South American floodplains, but has since taken the southern U.S. by storm—both literally and figuratively. The species adapted to float, and takes advantage of the habitat created by floods. So they often arrive and thrive in the wake of human disasters.

“The waters recede and the fire ants are the first ones there to grab all the resources,” says Alex Wild, an entomologist at the University of Texas.

When rains first submerge the colony, the ants join together using their jaws and sticky pads on their legs, according to a study in the Proceedings of National Academy of Sciences. Clumps form in just about a minute and a half.

Each bunch can contain anywhere from thousands to millions of ants. The critters at the bottom regularly switch out with the ones on the top, so (almost) none of the insects stay under long enough to drown. The most valuable members of the group—like the queen and her newest babies—are pushed to the top and center for safe keeping, while a few unlucky individuals get permanently pressed to the edge of the ball by their neighbors. If one part of the newly mobile colony is disturbed, other ants will move to fix the gap. These living rafts can stay together for days, or as long as it takes to reach a tree or dry land.

Normal ants bite and then spray acid on the new wound, but fire ants are much worse. They bite, hold on, and inject a venom containing 46 different proteins, including poisons that sometimes affect the nervous system. They also have a more brutal attack pattern than many social insects. If you knock over a beehive, not all the bees will come after you—most colonies have a few dedicated warriors to protect the clan. When fire ants are disturbed, however, they all attack. About one in every hundred people will have a full-body response to the stings, such as an allergic reaction or even hallucinations.

But these roving balls of horror have a kryptonite—suds. Soapy water prevents the ants from trapping bubbles of air around their bodies, which means they soon sink. Evacuees and volunteers can ward off swarms by spraying them with detergent.

The best way to fight these floating menaces is to learn to identify and avoid them. Like a drowning human, they are simply looking for anything to grab onto. A person who walks into the writhing mass of venomous ants during a flood is probably already having a bad day, and the pile of poisonous bugs will not make it better. “It’s not a pleasant experience,” says Mike Merchant, an entomologist at Texas A&M. “If you’re in a desperate situation like a flood, you can get hundreds of stings.”

Fire ants may even cause a decline in native species, though their tendency to move into areas that humans have already influenced could mean they get blamed for our own destructive behaviors. They made their way throughout the southern states after humans replaced natural landscape with non-native plants and materials. “We find fire ants in places where we humans have unknowingly created perfect conditions for them,” says Wild. “Any time you water your lawn, you create a fire ant welcome mat.” But research suggests that the invasive Solenopsis invicta has affected native fire ant species, some reptiles, and birds that nest on the ground, such as quail.

Whether fire ants are following in the wake of destruction or creating the chaos themselves, one thing is very clear: humans should stay out of their way. “Fire ants have always been the poster child for the worst of the worst in terms of what can happen if you allow organisms to move into a location where they haven’t evolved,” says Merchant.