Your kitchen sponge could have more bacteria than a toilet seat

Five of the ten most abundant bacteria species are categorized as potential pathogens. 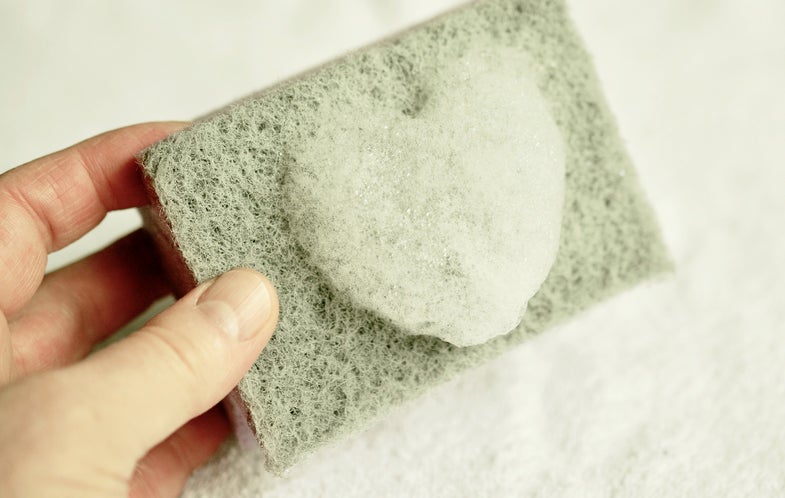 They are often damp, continuously introduced to new microbial cells, and are one of the biggest reservoirs of active bacteria in your whole house. And they aren’t even located in your bathroom.

We are talking about kitchen sponges.

The very thing that you use to “clean up” after a meal or snack contains the second highest load of coliform bacteria in the whole house, after your drain traps. A new study by researchers at several institutions in Germany investigates the role of kitchen sponges and their capability to collect and spread bacteria, even pathogens.

Study author Markus Egert of Furtwangen University says the group collected sponges donated from private households in the Villingen-Schwenningen region of Germany and analyzed the DNA and RNA of the microbes that made their homes in those common cleaning tools.

“We detected 362 different bacterial species in the 14 investigated sponges,” he told Popular Science in an e-mail. “Locally, the density of bacteria reached 54 billion per square centimeter of sponge tissue, which is similar to the microbial density of stool samples.”

The study shows that five of the ten most abundant species detected are categorized as potential pathogens, meaning they could cause infections in humans, particularly in those with a weak immune system like old people, sick people, and children.

And to make things worse, cleaning your sponge might not be making anything better. The study reports that two of the ten dominant bacterias, which are closely related to potentially pathogenic species Chryseobacterium hominis and Moraxella osloensis, showed greater proportions in regularly sanitized sponges.

“We assume that typical sponge cleaning techniques do not kill all bacteria inside,” says Egert. “The remaining species, which are, for unknown reasons, more resistant to the cleaning methods than the ones that get killed, proliferate again and grow up to higher shares than before. It might be similar to the use of antibiotics, where some bacteria can survive due to resistance against the drug.”

One these abundant and cleaning-resistant species, Moraxella osloensis, is known to cause stinky laundry, which may be why sponges smell so gross after a while, Egert says. The study also shows that since these bacteria tend to multiply upon sanitizing, the more times the sponge is cleaned the more pungent it becomes.

Next steps for the researchers include investigating the actual pathogenicity of the kitchen sponge microbiome and looking into different sponge-cleaning techniques and their effects. For now, the moral of the story is replace your sponges regularly to avoid getting sick.

Egert recommends replacing your “dirty old friend” weekly, especially if you live or work in a hygiene-sensitive area, like a hospital or cafeteria, or if you have sick or older people in your home.

If you are having trouble parting ways with a yucky old sponge, he says that cleaned sponges could be used in a place that is less hygiene-sensitive, like a garden.

“Don’t be afraid of your sponge, but be aware that it contains billions of potentially pathogenic germs,” Egert says.