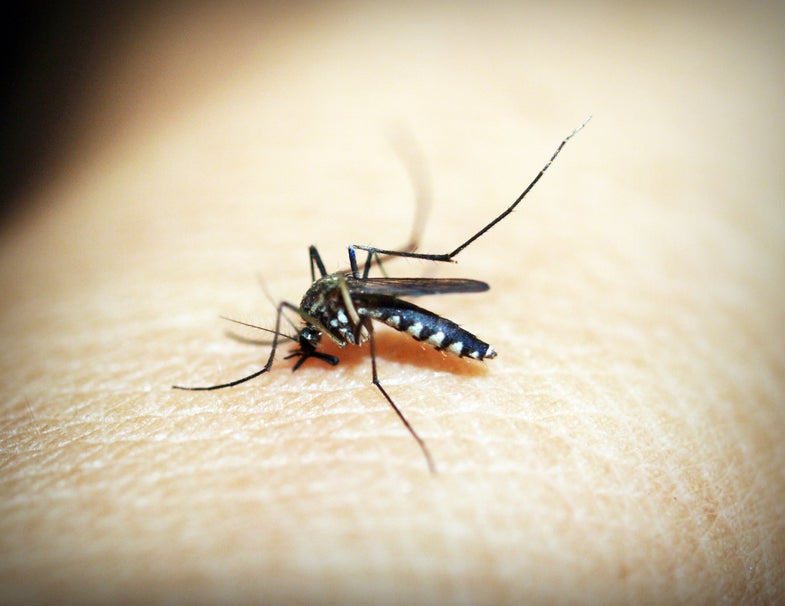 The mosquito is a delicate insect, with spindly legs and a graceful proboscis. The parasitic, single-celled organisms that spread malaria are even smaller and more fragile, and scientists are trying their hardest to remove them from the planet. More than 400,000 lives every year are at stake—that’s more people than die of international terrorist attacks, lightening strikes and shark attacks combined.

Part of the solution may lie with genetically modified Serratia, bacteria sometimes found in showers and toilet bowls. Scientists have created a strain of the microbe that blocks the malarial parasite. And as a critical bonus, it can spread by itself through mosquito populations.

Serratia usually lives in the midgut of the mosquito, but scientists realized that some strains also colonize mosquito ovaries, and a gland that males use while mating. Because of the bacteria’s preferred locales, the genetically modified bug can spread during sex—and to the surface of resulting mosquito eggs. That means not just the infected mosquito’s offspring pick up the bacteria: all the larvae growing in the same water receive the genetically modified germs too. “There are very few bacteria that are able to spread in this way,” says Marcelo Jacobs-Lorena, a microbiology researcher at Johns Hopkins. The modified Serratia creates a compound that makes it hard for the malaria parasite to continue to multiply and thrive, but does not harm the mosquitoes that would usually carry that parasite and pass it on to us.

In order to complete this experiment, the scientists had to be willing to get a few bites. The mosquito lab at Johns Hopkins has more than 30,000 mosquitoes, and some inevitably escape—though the insects carrying malaria are in an area with more stringent safety precautions. The researchers fed their mosquitoes both infected and malaria-less human blood, which they got from blood banks (expired donations were fine for the test) and from volunteers who knew their blood would be used for science.

They first tried modifying E. coli—a common bacteria that’s relatively easy to mess with—to carry genes that produce proteins that inhibit the malaria parasite’s ability to grow and reproduce. But the E. coli that’s used in a lab is less virulent and not adapted to mosquito guts, and scientists couldn’t get it to thrive. Then Sibao Wang, a scientist at the Shanghai Institutes for Biological Sciences, stumbled upon Serratia while dissecting mosquito ovaries. Finding bacteria in the reproductive system was like striking biological gold. “In the past, people tried to identify the bacteria that can be vertically transmitted and they didn’t,” says Wang. “And I did. We are very excited.”

Though it took the scientists a decade to get this research right, the principles could translate to other species of mosquitoes—and perhaps even other insects. “This is approach that could be used in the future to fight other diseases, but for now we are concentrating on malaria,” says Marcelo.

Next, the team will release mosquitoes carrying the genetically modified bacteria into special enclosures that simulate the natural environment in Zambia. The bacteria makeup of the real world is vastly more diverse than the enclosed laboratory, and so the researchers want to see if the modified Serratia acts the same in a new playground, with new bacterial friends. If everything goes smoothly, the next step is releasing the engineered bacteria into the wild—after getting government and community approval, of course.

“You don’t want to start transmitting new viruses,” says Gloria Volohonsky, former mosquito researcher at the Institut de biologie moléculaire et cellulaire at the University of Strasbourg, who was not affiliated with the study. “There’s always a risk of playing with just one part of the ecological system.” The researchers are asking permission to release Serratia modified to simply produce a protein that glows under ultraviolet light. That bacteria won’t protect mosquitos from malaria, but it will help researchers track how such an infection might spread.

Jacobs-Lorena says he kept real-life malaria victims in his thoughts during the challenging years of research. “While we were talking just now, almost 30 children died of malaria,” he says. “That is what drives our desire to help contain this disease.”