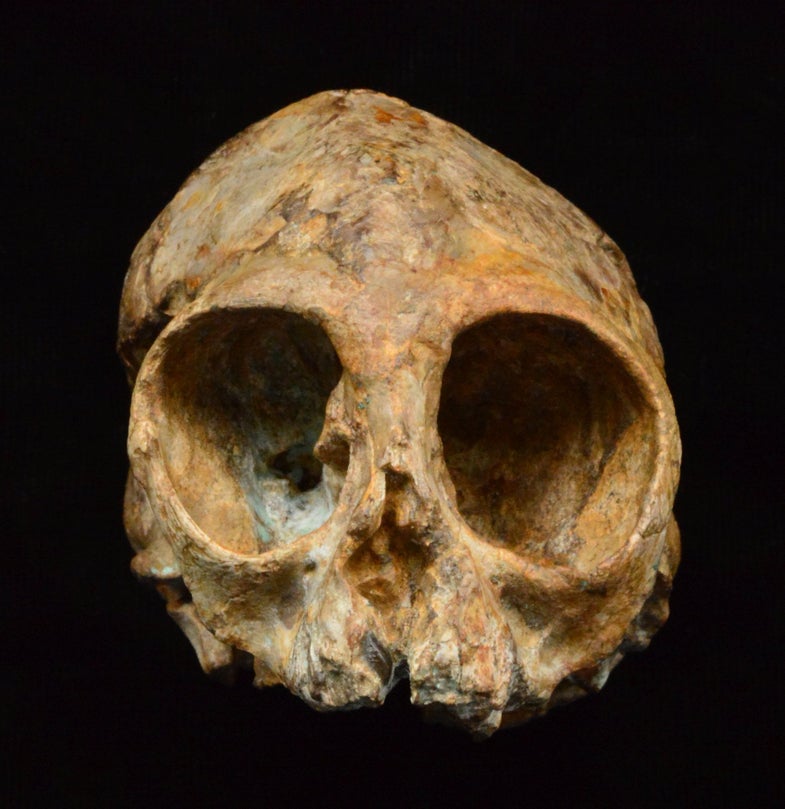 In September of 2014, a cigarette break would lead to an incredibly important discovery of a human and ape ancestor’s remarkably complete skull.

Isaiah Nengo of the Turkana Basin Institute at Stony Brook University and De Anza College in Cupertino, California, the lead author of the study, had been screening a site in the Napudet area, which is west of Lake Turkana in northern Kenya, with a group of six local fossil finders when a colleague discovered a bone just as they were about to head back for the day.

“It’s time to go back, and we’re walking back to the field vehicle, kind of in a bad mood, and then one of my assistants, his name is John Ekusi, he pulls out some tobacco and starts rolling it up into a cigarette,” Nengo says. “We chase him away saying you’re gonna kill us with that smoke, go smoke it somewhere else. So he hurries up and walks ahead of us. As we’re approaching the car, before we go to the car, we see him stop and to go around in circles, and we realized he must have found something.”

Upon closer investigation of the bone, it became clear to Nengo that this was the skull of a primate.

The skull, now nicknamed Alesi, is that of an infant primate dated back to around 13 million years ago, and could reveal what the common ancestor of all living apes and humans may have looked like.

Apes,which includes chimpanzees, gorillas, orangutans and gibbons, are the most connected to humans amongst all living primates. Our closest relative with chimpanzees lived in Africa 6-7 million years ago.

“Over the years, we have discovered quite a few fossils that help us to understand better the human stages of evolution, from present to about six or seven million years ago,” Nengo says. “We have found some spectacular fossils, the baby that was found in Ethiopia … and there’s Lucy, there’s the Turkana boy, there’s been some amazing fossil finds to understand humans. There’s still a lot to learn, a lot more.”

However when it comes to the prehuman stage of our evolution, we know significantly less, he says, mostly amounting to only finding tiny bones and teeth. Hopefully, the remarkable discovery of the lemon-sized, gibbon-like skull of Alesi will change that.

A medical CT scan done on the skull demonstrated that Alesi’s teeth were not a monkey’s, but an ape’s, says Nengo. Additionally, team member Paul Tafforeau said in a press release that through growth lines visible in the unerupted adult teeth the ancient ape was only about a year and four months old. He also says imagery provided details of the brain cavity and the inner ears.

John Fleagle of Stony Brook University says in the same release that the teeth also demonstrated that Alesi belonged to a new species, Nyanzapithecus alesi. Other species in theNyanzapithecus genus are only known by a few, scattered fossilized tooth remains and scientists were unsure if they were even apes at all.

This study is just the beginning of investigating what Alesi could mean in terms of evolution, Nengo says.

“This study is just a preliminary announcement to let scientists know and the rest of the world know that we have something important here, and here are some of the questions we think it can address,” he says.

He has assembled a team of about 16 specialists to continue to explore the skull of the baby, and see what it could’ve looked like as an adult. Nengo also plans to go back into the field this upcoming January to explore more fossils at a site half a mile from where Alesi was found.

“This is going to become like an anchor for future studies and what babies can tell us,” he says.

This post has been updated with Isaiah Nengo’s affiliations.