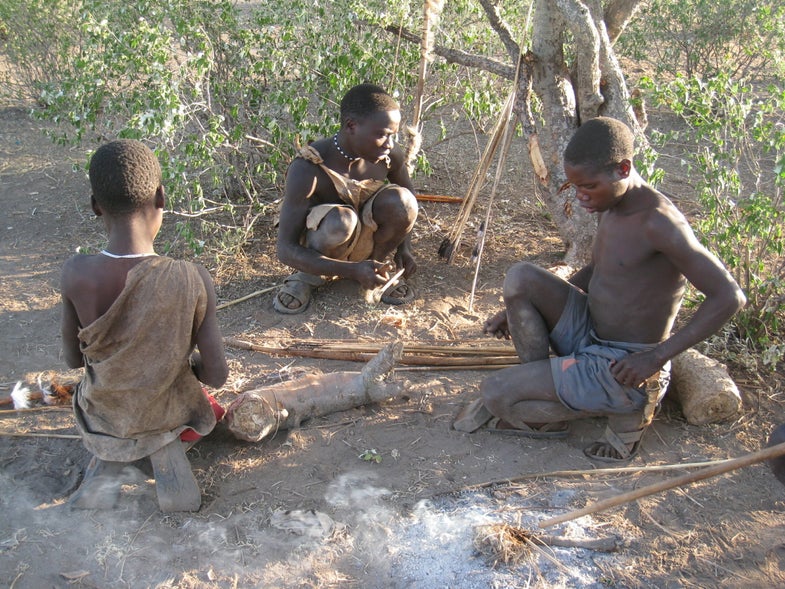 When we eat, we’re not just feeding ourselves. The multitude of microbes that reside inside our guts get fed, too. These microscopic beings are crucial to our survival, yet we still know very little about how they keep us thriving. Understanding what makes a microbiome particularly healthy could help us cultivate the ideal colonies inside our stomachs. For now, all scientists really know is that it seems to be better to have a diverse group of microbes than a more homogenous bunch—and that our internal critters change drastically in response to our dietary habits.

To better understand this, a team of scientists studied the microbiomes of a unique group of individuals: The Hadza people, a hunter-gatherer community living in Tanzania. They found that the gut microbiomes of this tribe are far more diverse than ours, and that they change with the seasons. So much so, in fact, that entire groups of microbes appear and disappear depending on the time of year. The research group published their results this week in Science.

“We know that diet is one of the most impactful levers we have on altering the relative abundance of microbes in one’s microbiota,” says Sam Smits, a grad student in microbiology at Stanford University and lead author of the study.

If you want a group of people whose lifestyles are completely unlike those in the Western world, you can’t get much better than the Hadza. Like our pre-agricultural ancestors, their days revolve around finding food. But despite their lack of access to medical care, they tend to live long, healthy, and productive lives. Because of this, researchers are fascinated by what they can tell us about how the human body functions.

The area of Tanzania where they live experiences a dry and wet season. The Hadza’s diet changes accordingly; they consume mostly meat and vegetables in the dry season and mostly fruits and vegetables during the wet season. Smits and his team collected fecal samples from the Hadza community over several seasons, then analyzed the bacteria they found there. The team then compared those results to those of Americans who participated in the Human Microbiome Project.

It turns out that the microbiomes of the Hadza changes drastically with the seasons. Certain species of microbe disappear entirely from the gut as the season changes and reappear again when that season comes back. And as a whole, the Hadza’s microbe diversity was far greater than that of the average American.

“The most surprising component to me, however, was when we began to look at which species were disappearing and reappearing,” Smits says. “It is in fact those microbes that are virtually undetected in industrialized populations surveyed to date.”

In other words, they seem to periodically lose the microbes we ourselves have lost forever. Or until we figure out how to get them back, anyway.

But why is a gut chock full of diverse microbes so important? Our gut microbes do way more than you might think. They help us digest and break down food, releasing key nutrients that our bodies wouldn’t otherwise be able to access. And there’s increasing evidence that our gut bacteria are actually involved in nearly every organ system in the body, allowing us to establish a healthy immune system and knock out bad bacteria and pathogens.

Having a diverse microbiome helps us effectively defend ourselves from infections. Smits likens this to a typical home garden. If you blanket a small plot of dirt with just a few species, it will certainly not maximize the possible yield—and it also won’t stand up well to pests. “We know that diverse microbiotas maximize the utilization of available nutrients and consequently make it more challenging for invading pathogens to take up residence in our guts,” says Smits.

Smits and his team surmise that the Hadza have an extremely fibrous diet—and their food prep habits—to thank for their flourishing gut flora. Humans can’t digest and break down most fiber, so a lot of it sits in the gut intact. That provides an excellent nutrient source for hungry microbes.

Surprisingly, the average Hadza microbiome is at its most diverse during the dry season, when their diet shifts to be heavy in meat. The researchers think that’s because the Hadza prepare their food immediately after capturing it, which means they’re more likely to consume all the microbes that lived inside that creature’s gut.

How will this help us? As we continue to move further and further away from the diets that our ancestors evolved to thrive on, it’s becoming clear that our microbiomes are suffering. Understanding what a more diverse microbiome looks like will help scientists figure out what a healthy microbiome looks like—and how we can reverse engineer one.

But one thing is already clear to Smits and his team: Eating a more varied, fiber-rich diet is key to a healthy, diverse microbiome. “We consume foods that are overwhelmingly low in fiber and now possess one of the least diverse microbiomes on the Earth,” says Smits. Americans consume, on average 15 grams of fiber a day. By contrast, according to the authors, the Hadza consume about 100 grams, as their diets contain no processed food groups.

Smits and his team plan to continue to study the Hadza’s gut bacteria. They also plan to study specific microbes’ effects on animal health using mice. More research is needed to understand exactly what species of microbe should be living inside of us. For now, the biggest takeaway is something you probably already knew: you likely aren’t getting enough fiber. And the key to getting more is as simple as eating more vegetables and eschewing heavily process foods.